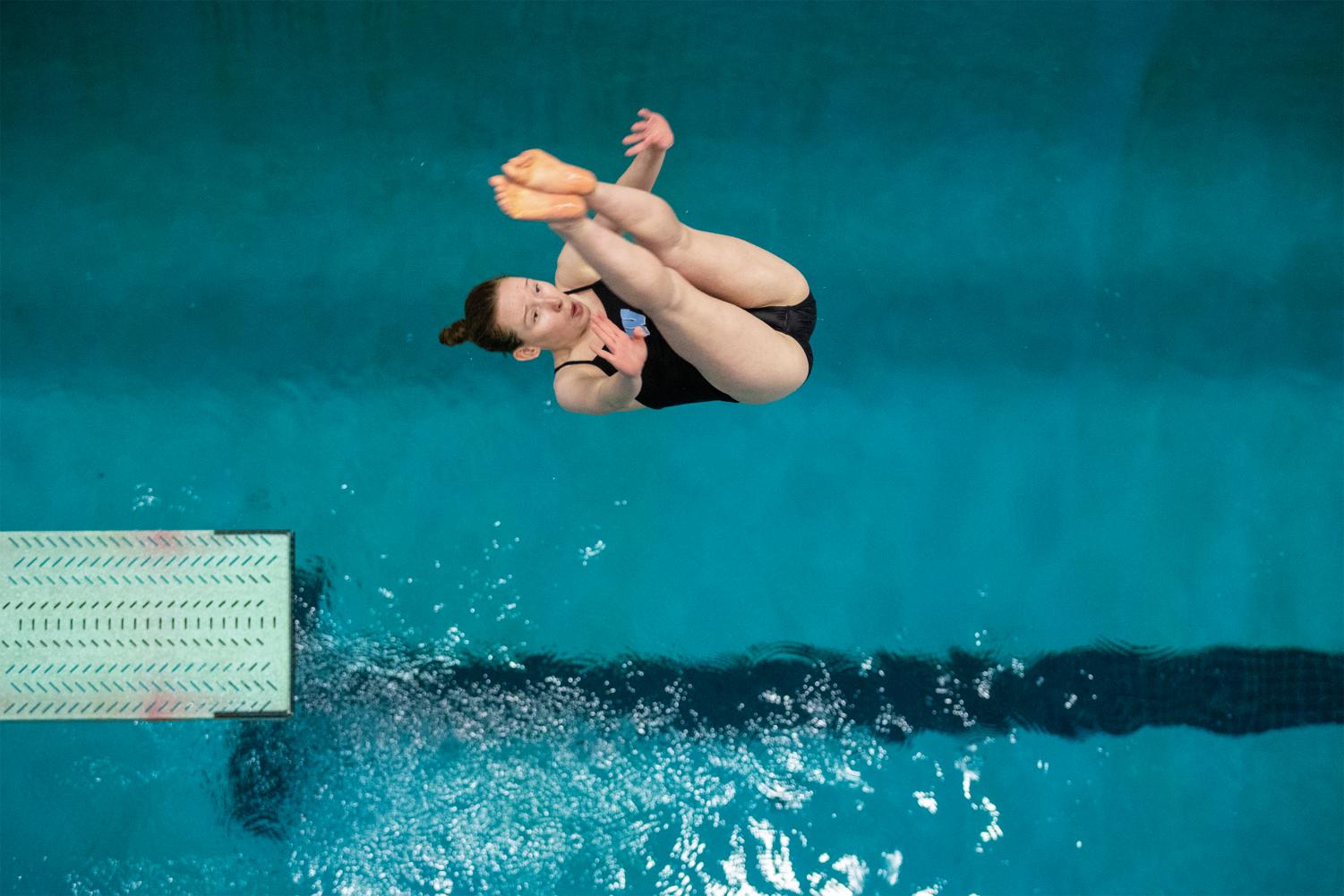 Senior Hannah Donner mid-dive. Donner has been diving since she was nine, diving for her summer team. (Photo courtesy Adam Hirsh)

Senior Hannah Donner mid-dive. Donner has been diving since she was nine, diving for her summer team.

Seniors make their mark on the diving boards

By Matt Mande and Andrew Eagle

Senior Hannah Donner began diving when she was nine for her summer team. Senior Liam Gilbert-Lawrence took a similar path, starting when he was 12, also for his summer team. Since then, both Donner and Gilbert-Lawrence have joined the Whitman Swim & Dive team, racking up hundreds of points for both the girls’ and boys’ sides, respectively. Both have also gone through the recruiting process and plan to dive in college.

Senior Hannah Donner dives her way to a division championship

“I think my parents signed me up, or I was interested in it,” she said. “I’m not really sure.”

But she does remember her first meet — and it only took that first meet for her to fall in love with the sport. Donner was nine years old, competing in a summer league meet at her old club East Gate. She still has a clear and vivid memory of her first dive — “I was so nervous to get up on the board,” she said.

She jumped backward off the diving board and dove into the water. Her initial worry that she messed up quickly disappeared when she surfaced and heard the claps from the crowd.

“I remember how I felt — it was so much fun to compete, but also nerve-wracking at the same time,” she said.

Today, Donner dives for both Whitman and the Montgomery Dive Club’s AAU national team. Donner joined Whitman Swim and Dive in her freshman year; she’s now a senior, the captain of the team, and also plans to dive in college.

Her leading role on the team didn’t come without focus and persistence. Donner’s ability to stay on task during practice contributes to her success with diving, diver Jonathan Lindstrom said.

“She doesn’t get off topic when we’re warming up,” he said. “During our club practices, she’s always doing the workouts and never gets distracted.”

She enjoys different aspects of both teams. Because her teammates on the club team are all at a similar skill level, they have a better understanding of each other’s difficulties and progress with dives, she said.

Whitman’s team, on the other hand, contains a variety of skill levels, but is more spirited and fun, she said. She also appreciates how Whitman’s dive team works alongside the swim team, many of whom know little about dive.

“It’s a really fun environment with them,” Donner said. “To teach them and also to see their reactions when they’re watching us dive.”

Aside from the team aspect, Donner also loves the mental and physical challenges that come with diving and the rewarding feeling of mastering new dives. The rush she gets after finally learning a dive she’s been struggling with is one of her favorite aspects about the sport, she said.

“You feel like ‘wow, I did it,’” Donner said. “Your coach is cheering for you, and you’re just really happy.”

“She looked at diving as something that she can conquer and that she wanted to do,” Patricia said. “And she did it. She succeeded.”

But Donner can’t conquer everything right away, and the challenges are often frustrating for her. One of the most difficult parts of the sport is trying to master tough dives; she struggles most with inward dives, but she’s also struggled with all of her dives at some point, she said.

Though fixing dives can make practice aggravating, another difficult aspect Donner faces is underperforming at meets, which is an unavoidable part of diving, she said.

These mistakes are more common under pressure, a characteristic of meets which varies depending on crowd size. Whitman competes in various meets, including dual meets against other MCPS high schools, Divisionals, the regional and state-wide championships, and the Metropolitan Interscholastic Swimming and Diving Championships (Metros), which includes both public and private school teams from around the D.C. area.

This year, Donner placed first in the MCPS Division 1 Championship Feb. 1, outscoring the second place diver by more than 25 points.

Metros — Donner’s favorite — has the most teams in attendance and the largest audience of these meets. Although she doesn’t particularly enjoy diving at Metros because of the stress, she likes to watch her teammates from both Whitman and her club team compete, she said.

“We won Metros out of 50 schools and there are about 60 divers,” she said. “I think that was a really big highlight of my diving career.”

During her final year of diving for Whitman and MDC, Donner is preparing for the next stage in her diving career: college. She is currently exploring a few NCAA Division III options for next fall.

In an extremely competitive college atmosphere, Donner hopes that the parts of diving she loves don’t fade away, she said.

“This might sound kind of cliche,” Donner warned. “But I hope to continue enjoying diving. I hope the stress that comes with college sports doesn’t ruin my ability to have fun.”

A small, nervous-looking 12-year-old boy slowly crept up to the edge of the diving board at Bannockburn Pool. His only focus was to successfully complete a front flip. To his elementary-school-aged self, it seemed like all the pressure in the world was on his shoulders. He went through his hurtle, reached the end of the board and jumped. Everything was going great — until he slipped. As he over-rotated in mid-air, Liam Gilbert-Lawrence was only thinking one thing: this is going to hurt.

Luckily, Gilbert-Lawrence — now a senior on the Whitman dive team — used this mishap and other mishaps to shape himself into one of the team’s best divers. His determination also ultimately led to many colleges recruiting him.

Gilbert-Lawrence started diving in sixth grade at Bannockburn, his local pool. This was the first summer Bannockburn had a dive team, and the first time Gilbert Lawrence took jumping off a diving board seriously. It was all too common for him at first to make a fool of himself when he first began, he said.

“I was known to be a flopper,” Gilbert-Lawrence said. “I had the bruises to prove it, too.”

Gilbert-Lawrence’s lively personality and never-quit attitude have been essential in his continuation of the sport, he said. When he first started, he said that learning the dives didn’t come easily, especially because he started diving later than the other top divers he competes against now, he said.

“It was tough at the beginning,” Gilbert-Lawrence said. “I was used to doing flips with my friends and not being critiqued on any of my dives.”

After two more years of summer league practices and private lessons, Gilbert-Lawrence decided to try out for the Mid-Atlantic sector of the U.S. National Team when he was 14 years old. There are two teams within the sector; the development team and the team that participates in nation-wide competitions. Although starting his career on the development team, Gilbert-Lawrence currently competes for the latter.

Gilbert-Lawrence said that adrenaline is the main factor that drives him during competitions, especially when going off the high dive, which spans 33 feet in the air.

“Weekend meets are great, because I just really, really enjoy diving,” he said. “My diving friends make the sitting around enjoyable.”

Even though Gilbert-Lawrence has been diving in national competitions for years now, he still gets nervous right before he competes due to the mentally-taxing nature of the sport, he said.

“If you mess up, you don’t get a re-do,” Gilbert-Lawrence said, “It’s months and months of training all leading up to one moment.”

Junior Erez Yarden, who also dives for Whitman, has known Gilbert-Lawrence for six years. Yarden said that Gilbert-Lawrence sets a high, yet necessary bar of expectations for all the divers on the Whitman team.

“He cheers us on like it’s life or death during the meets,” Yarden said. “It instills confidence in all of us and makes the diving experience much more enjoyable.”

Gilbert-Lawrence began drafting emails and setting up phone calls with colleges during the beginning of his junior year. Multiple colleges invited him on recruiting trips to their campus because they were interested in him diving for their school. During these trips, Gilbert-Lawrence would tour the facilities and spend the night with a current team member.

Gilbert-Lawrence is looking for a college with both strong academics and a competitive diving team. Although many divers have already committed, Gilbert-Lawrence is currently weighing his options regarding what college to dive for.

“The whole process has been pretty stressful,” he said. “Waiting to see if the colleges were impressed with dives in my videos was very nerve-racking.”

As his last year of diving for Whitman continues, Gilbert-Lawrence is focused on leading the Vikes to success in all of their dive meets, whether that’s a meet against Churchill or Metros Finals.

“I would be lying to you if I said college wasn’t on my mind during dive season,” Gilbert Lawrence said. “But I can’t take my last year of diving here at Whitman for granted.” 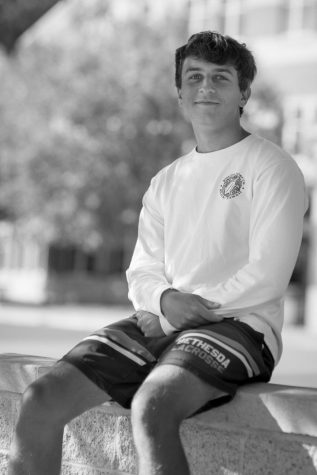 To learn more about my community 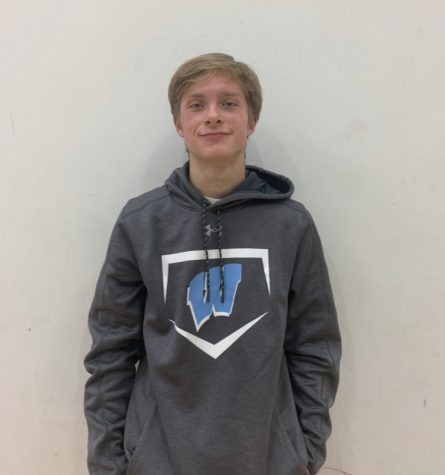 Bottoms Up by Trey Songz 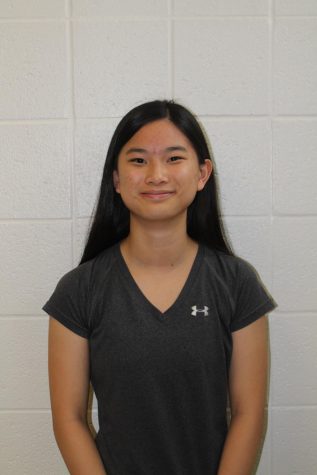 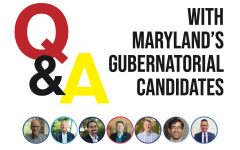 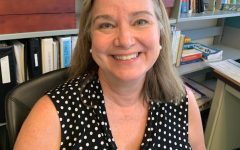 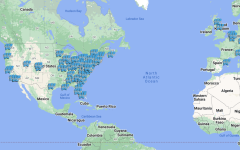 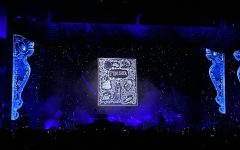 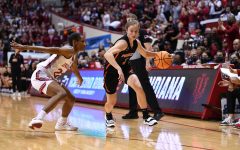 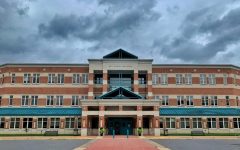 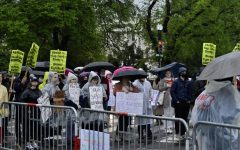 Roe is gone. How can we help future generations? 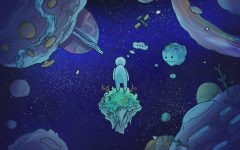 How I learned to let go: my experience with the floating rock mentality