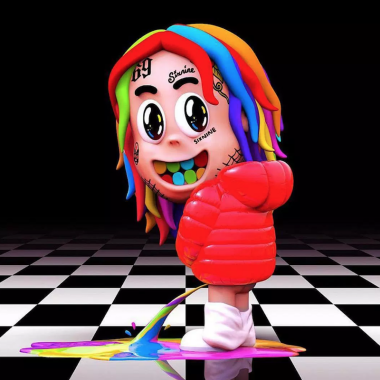 Tekashi goes out with a bang in “Dummy Boy”

The rapper Daniel Hernandez, better known as “Tekashi 69” or “6ix9ine,” has a backstory that could be a movie. He’s a rainbow-haired ex-gang member, who rose to the top of the Billboard charts out of nowhere on Nov. 10, 2017, after dropping his hit, “Gummo” and was then arrested with the possibility of being jailed on racketeering and drug-related charges.

His album, “Dummy Boy,” was released right before he went to prison Nov. 18. With legal experts expecting a sentence over 20 years, this might be one of the last projects we see from Tekashi in a long time.

Dummy Boy consists of 13 songs. His explosive song “Mama” has all the makings of a hit. Tekashi opens with a low-toned voice and flows effortlessly along with the beat. Known mostly for his songs where he screams into the mic, Takashi shows with “Mama” that he’s capable of switching up his style. The song also features Kanye West and Nicki Minaj, which help maintain the upbeat vibe.

“Kika” opens with a tropical vibe and fiery start, featuring Tory Lanez. Tekashi doesn’t hold back, joining in abruptly after Lanez’ chorus. Tekashi says, “I do my own stuff, I don’t need 50 homies to roll with Folk stuff, I’m on my doley, I’m on my boss stuff.” Tekashi lets his listeners know that he feels like he is at the top of the rap game and backs it up by releasing hit after hit. The placement of Tekashi’s verses fits in perfectly with the overall vibe of the song.

Tekashi has always been very controversial in his songs, even attracting the attention of the FBI after he rapped about threatening to shoot people. Lyrics such as those on “Waka” potentially incriminate Tekashi, such as, “Y’all gotta move, give me some room, I’m ’bout to shoot. Boom! Everybody runnin’ out the room.”

Tekashi’s “Dummy Boy” was conveniently released before his incarceration. It’s a collection of the popular hits of Takeshi’s career—and probably all there ever will be. Still, because Tekashi only released single songs before, releasing this album cemented him as a real artist.