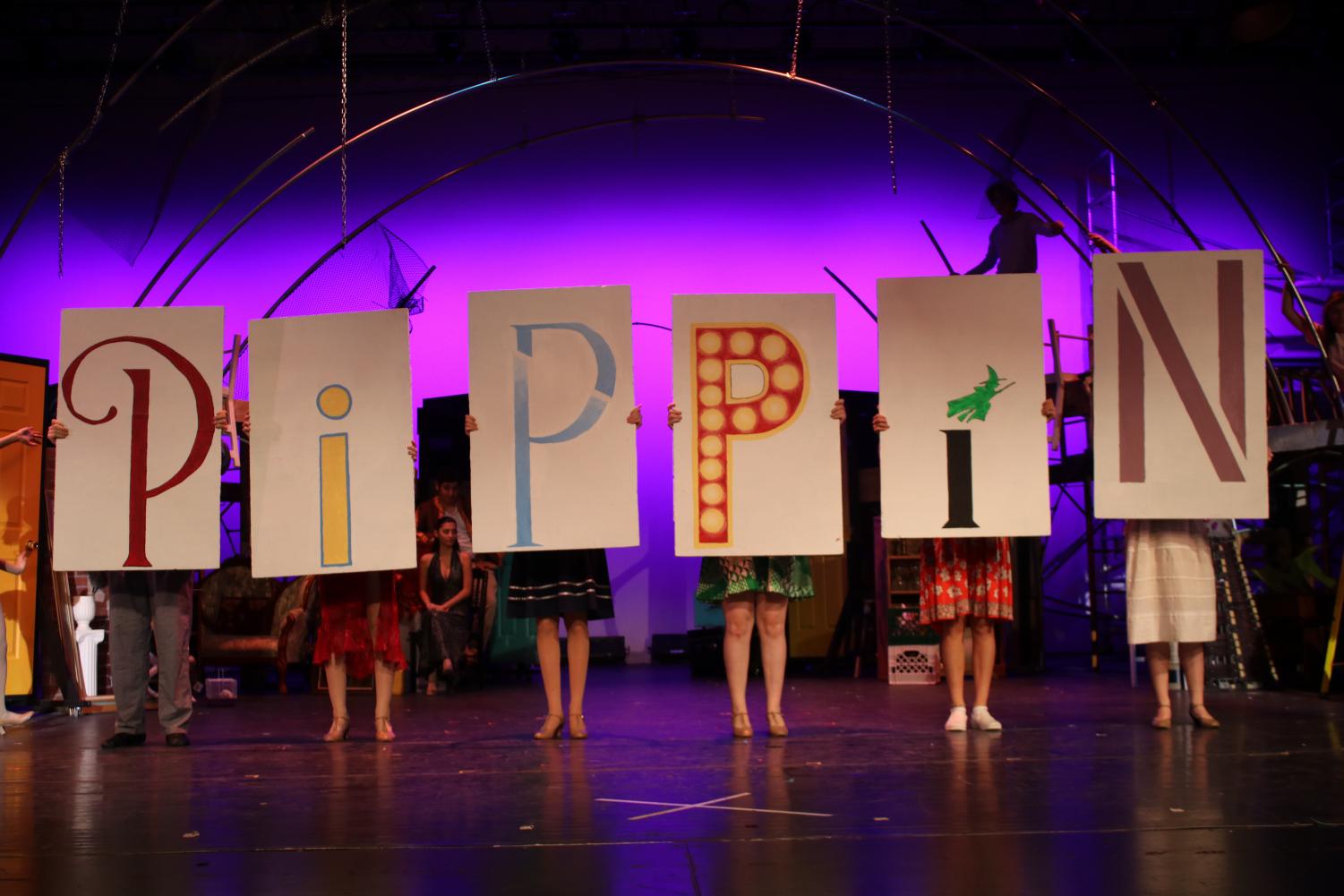 Pippin debuted November 15. Tech teams started preparing for the show during the second week of school.

Two-thirds of the way through Act I, Pippin’s estranged grandmother advises him to lighten up  and live a little in the classic sing-along “No Time at All.” Backstage, the tech crew takes that message to heart, singing along in unison and following the dance moves onstage. The crew has been working on the play since August: it’s no wonder they know all the lyrics.

Tech is the behind-the-scenes half of the drama program. With nine separate teams each covering a different section, tech’s responsibilities are incredibly diverse and last the entire drama season. They work upwards of five hours a day, seven days a week for two weeks leading up to the show, in addition to months of prep beforehand. This all leads up to three showings of the play—just three hours long a piece—with more work to be done before each one.

Despite the hard work, scenic designer Harley Pomper says she wouldn’t trade it for anything. Even if tech receives less recognition than actors, Pomper said the lessons she’s learned are invaluable.

“I deal with office problems and administrative work, but I also get to use creative instincts and my intuition,” Pomper said. “It’s been the biggest window into adulthood that I’ve ever experienced.”

Diving into the show 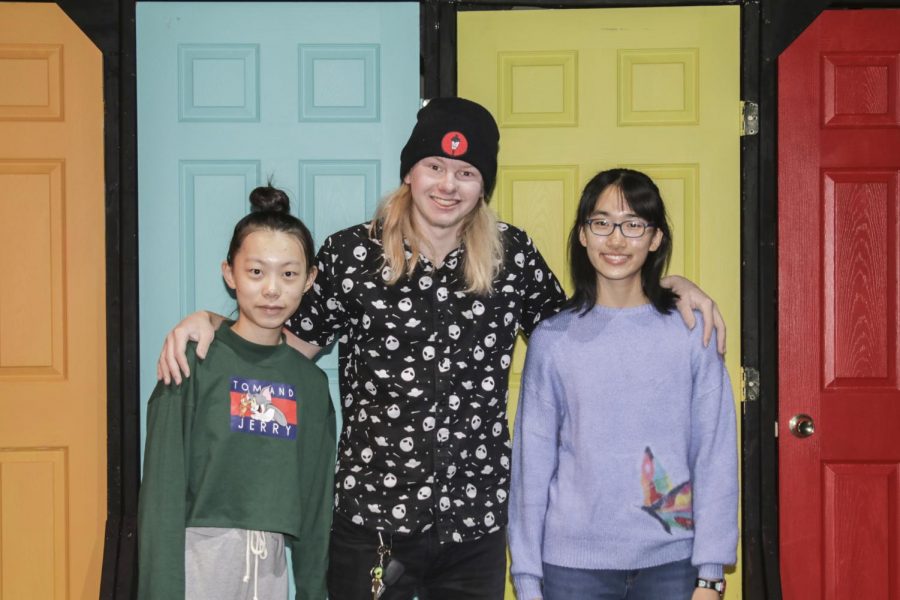 The general team, which has many members absent from the photo, is in charge of construction and builds the set. From left to right: freshman Yi Jing, senior Tucker Sutcliffe and freshman Betty Zhu. Photo by Sam White.

Tech position interviews start during the second week of school. The program hits the ground running in preparation for the first production of the year, with opening night just eight weeks later. After the technical director conducts interviews and assigns the teams—publicity, lighting, sound, costumes, running crew, scenic, general, props and multimedia—the general team, in charge of construction, starts building the set. The general team stays after school every day until 6 p.m. immediately after interviews. Closer to the show’s opening, members often don’t go home until 7 or 8 p.m.

This may seem early, but Pomper’s job as scenic designer begins even earlier—in midsummer. She reads the script and then does the initial sketch for the set a month before tech interviews, she said.

“The initial set design is so much harder than it sounds, because you have to think ‘if I put that platform a foot higher, it affects lighting, and what lights we will have to get,’” Pomper said. “Those ideas have to be fully fleshed out before the other teams start their process.”

Once Pomper completes the sketch for the set, it’s up to master carpenter Amy Richards to execute Pomper’s vision. Whitman Drama doesn’t have enough space to store the set structures year to year, so a large portion of the general team’s budget and time goes into building new structures. But the biggest focus for Richards is to make sure the set is structurally sound; she considers herself “the safety police,” she said.

Once the set is fully built—usually a couple of weeks before opening night—the scenic team paints, and Pomper focuses on the small details and aesthetic. Since the set is the basis for so many other teams, all of this generally happens in the first half of the process, Pomper said. 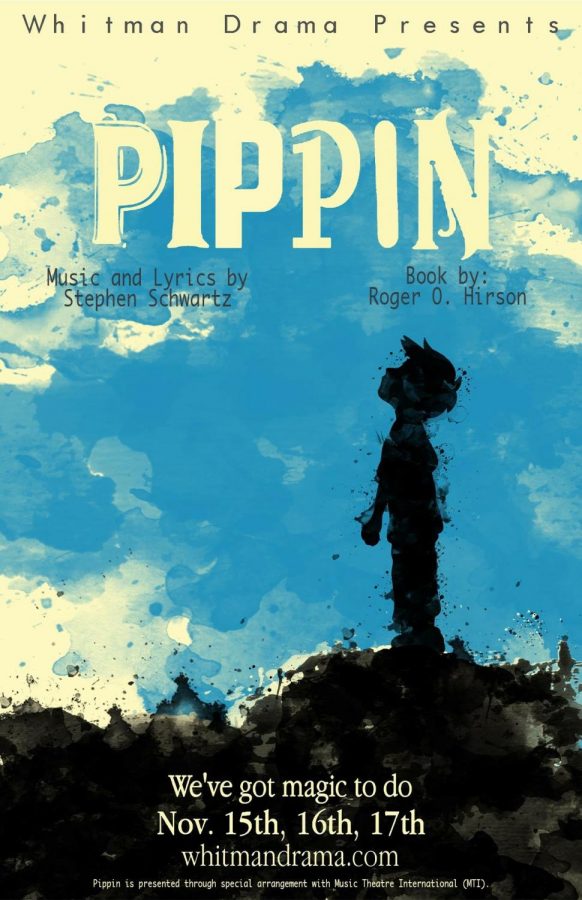 Each Whitman Drama play and musical has an artwork designed to advertise the production. During Teach Week, the publicity team distributes flyers and postcards with the artwork. Pippin artwork designed by Kevin Hatcher (’18).

Two weeks before opening night, the tech crew does the bulk of their work without the actors, the general and scenic teams are done and the other teams are in full swing. The publicity team starts by making “sandwich boards,” or two-sided advertisement boards that sit in front of Whitman, Pyle and on the corner of River Road. Producer Julia McGowan created the design, which is also featured on the flyers and postcards that the publicity team distributes all over the school.

Most props are handmade by the props team, assistant props mistress Anais Meier said. Especially for the musical, many costumes are reused from past years since they have so many ensemble members, costumes director Keah Sharma said.

“My job is to make sure the costumes can convey the message of what the actors are already trying to say,” Sharma said.

The lights that lighting director Isaac DeMarchi chooses for the production arrive at the beginning of Tech Week. After that, the lighting team hangs the lights and does electrical work in a process called “loading.”

Once DeMarchi briefs multimedia on the lighting situation, they start making digital backdrops projected onto the set. Pippin didn’t require any projections, assistant multimedia director Adrian Knappertz said, but all shows in years past have. In last year’s musical “On the Town,” the multimedia team digitally traced an entire city skyline for the projection. 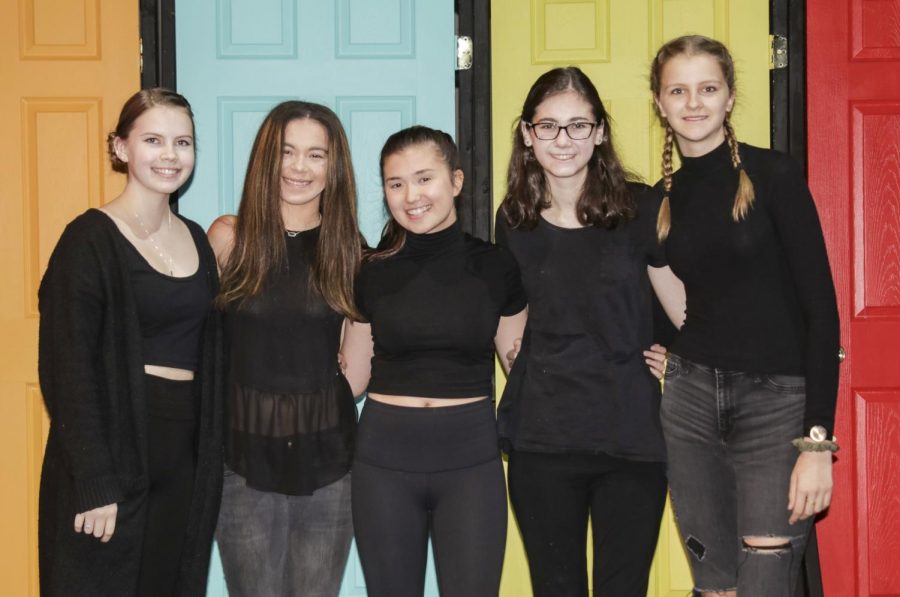 The props team decides which props will be used in the show and sets the timing and location of props changes. The team, as well as others, perfect their jobs during Hell Week. From left to right: junior Emma Shaffer, senior Brooke McLeod, sophomore Anais Meier, junior Arielle Feuerstein and freshman Bertille Aubert. Photo by Sam White.

The week leading up to opening night, actors and tech join up for “Hell Week.” As they run scenes, each team works on their cohesion: the lighting team practices their spotting and cues, the props team perfects the timing and location of where props come on and off stage, the sound team practices their effects and the costumes team adds stylistic touches. Everything at this point only perfects the details of the show, so the scene runs are treated as the actual event.

To further publicize the show, the multimedia team shoots promos—teaser trailers for the show that the team edits and then posts on a YouTube account.

“It’s hard to capture the beauty from when you’re watching it live,” Knappertz said. “We try to give the audience a sense of what it’s going to be like.”

During Hell Week, Pomper’s role fully transitions from scenic designer to student technical director; she supervises the teams and acts proactively to fix tech issues or interpersonal issues that individual teams are having.

“I want to make sure that the team heads have responsibility over their own sections, and I don’t want to overstep those boundaries,” Pomper said. “A lot of the time people need an objective outside source, so I act as a consultant.”

When the final run-through rolls around, the production is organized—but very busy. The night before opening night they practice everything, from the pre-show “silence your cellphones” announcement to the quick costume changes in between scenes. 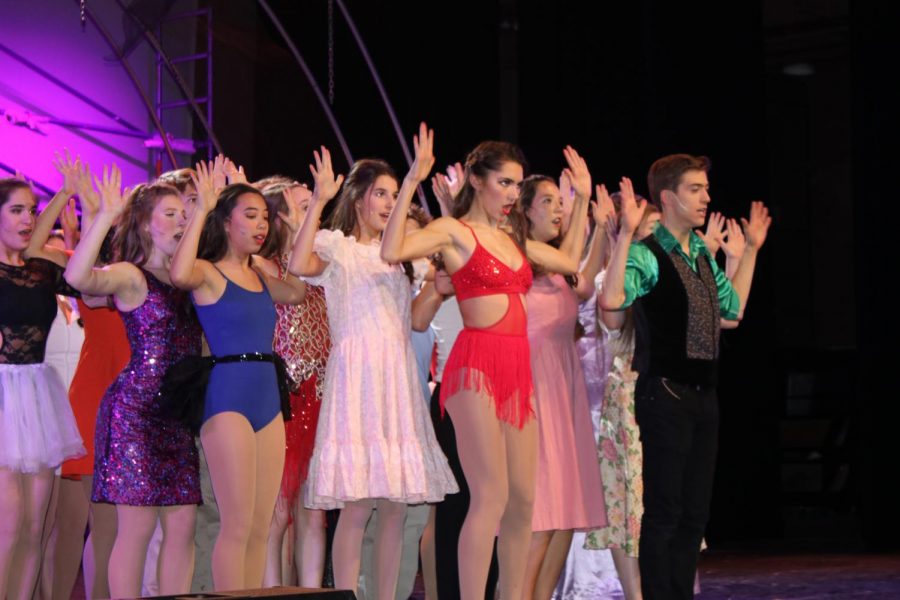 The show’s months of preparation and practice comes together for three performances. For Pippin, the tech team had been working since August. Photo by Sam White.

The day of the show finally arrives, and tech’s work begins hours before the curtain opens. Publicity hangs signs marking the reserved seats, brings in drinks and snacks for the concession stand and sets up the lobby. They also give the parents of the actors the opportunity to write “candy grams,” notes that the publicity team will give to the actors backstage during intermission.

In the theater, sound director Rowan Mohan calls the actors onto the stage one by one, where they talk and sing as she adjusts their microphones on the soundboard. Actors who aren’t getting their mics checked head to the “Green Room” backstage, where the costumes team gives them their outfits and does their hair and makeup. Once tech checks every mic, organizes the props and gets the actors suited in full costume, the entire production staff meets in the main part of the theater 45 minutes before the show.

They gather in a circle as the pre-show rituals begin, where they link hands and pass a hand squeeze around the circle. After a pep talk from McGowan and a read-aloud of a letter from a Whitman Drama alumni, they go through a traditional non-religious prayer to Saint Genesius, the patron saint of theater.

After lots of cheering, everyone finally heads to their places, whether it’s the lighting booth, soundboard or backstage. As stage manager Luka Byrne moves around backstage calling, “Places!” the lights finally dim and there are whispers of “break a leg” before the opening number begins and the tech crew falls silent.

From then on, it’s a well-oiled machine. Running crew carries chairs on and off stage, the costumes team waits in the wings for quick changes and any sound or lighting issues are solved through the coms—headphones that the team directors wear to communicate with each other. With one of the most important jobs in tech, Byrne relays cues over the coms for the entire show. For example, he’d call for a blackout on stage from the lighting director or a sound effect from the sound director.

Three hours of songs and dance numbers later, tech’s work is finally done—until the next night.

Building a sense of community 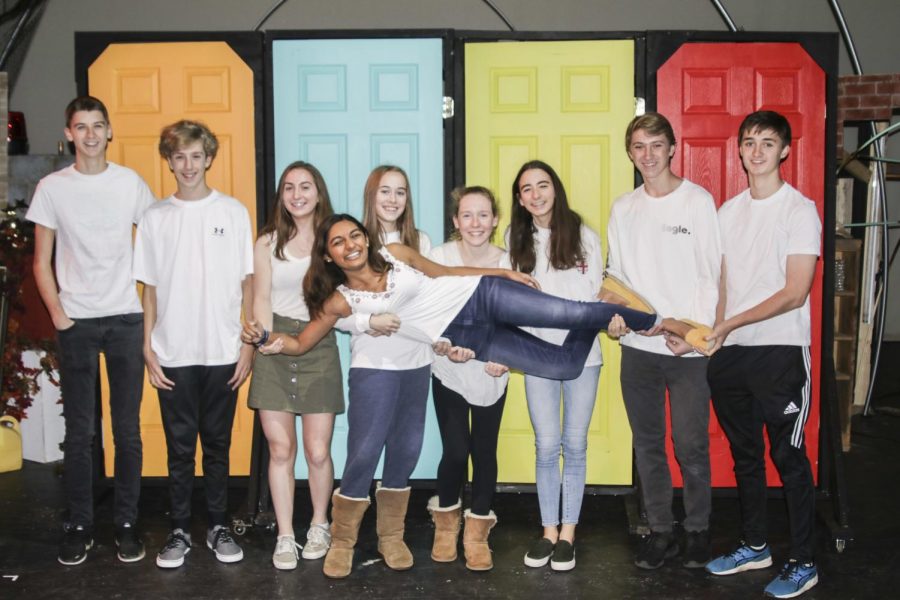 Working so closely for so many months unites the tech team as a community. They celebrate many traditions, such as “woading” and senior speeches. Photo by Sam White.

With the immense amount of time and effort that the tech crew puts in, it’s impossible not to form close bonds with other people, Pomper said. One benefit of working on tech is that you meet people you never would have know otherwise, Richards said.

“There’s not the same type of ‘grade gap’ that there is with other activities,” Richards said. “In tech we really intermingle, and it’s allowed me to meet a lot of really interesting and fun people.”

The community the crew builds every year is evident in their traditions. On closing night, they participate in “woading,” a ritual where the team directors and seniors paint their faces with blue “war” paint—a reference to the 1995 drama film Braveheart. They also do senior speeches on closing night, the most emotional tradition.

After woading, all Whitman drama members meet in the Green Room backstage around 2 p.m. Every senior, both in acting and tech, gives a speech to say goodbye to the drama program. Common themes include inside jokes, shoutouts and a lot of laughing and crying. Almost every speech mentions the family they’ve found in the community.

Julia McGowan is a Feature Editor and Luka Byrne is on the Multimedia Team for the Black & White.

For more photos from the Pippin production, see the below slideshow. All photos by Sam White. 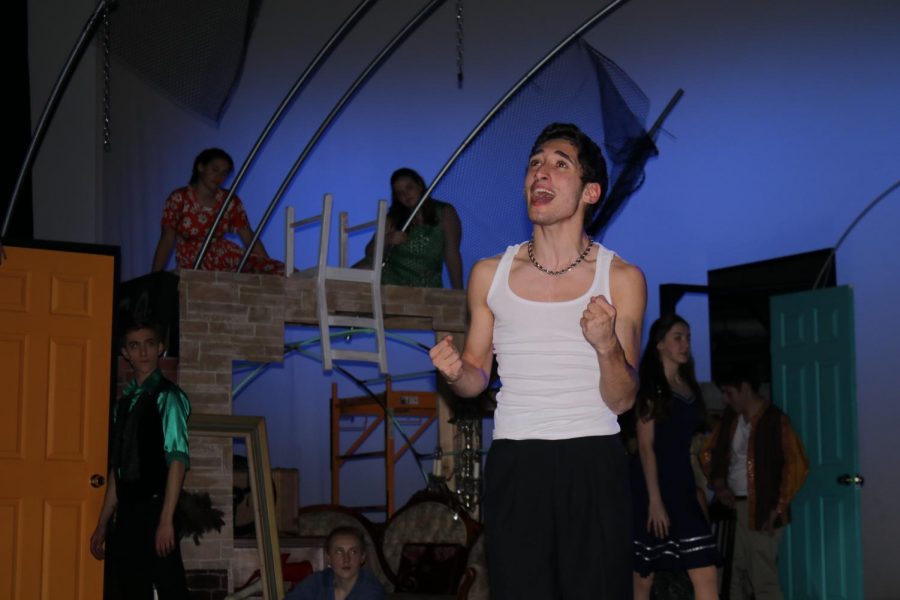 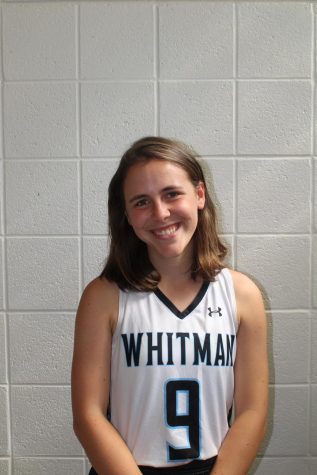 a fresh magazine from a student-run, independent news organization 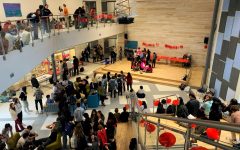 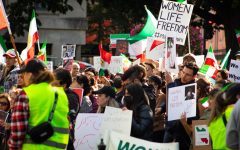 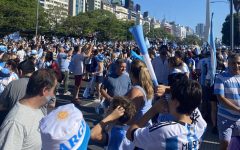 When soccer is more than a sport: World Cup victory unites Argentina