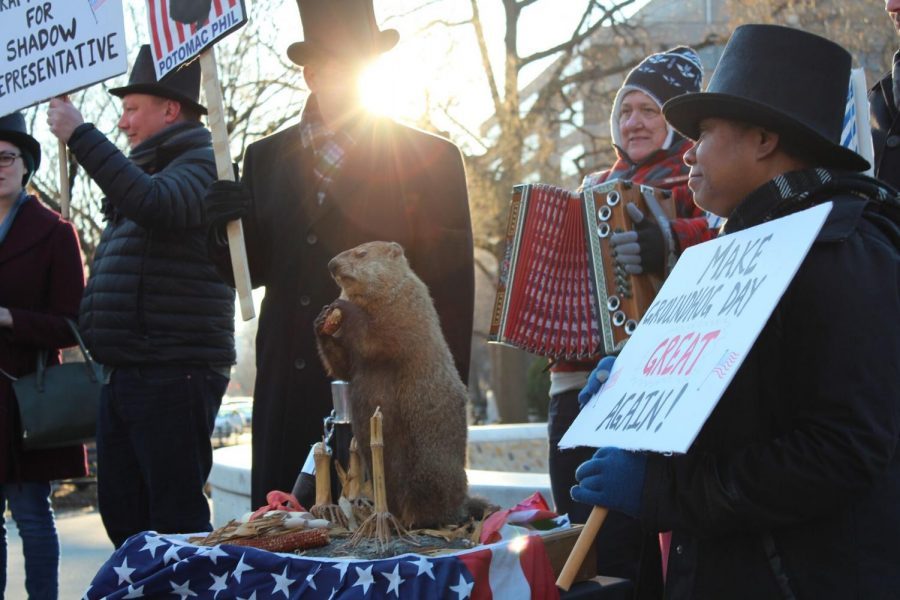 Beyond a shadow of a doubt: Groundhog Day festival draws D.C. residents

By Eva Herscowitz and Maddy Frank

In a sea of one hundred top hats, winter coats and smiling faces, a furry mammal is perched on a table, alone where the crowd has parted. Posters display messages honoring this squirrel-like animal. “Make Groundhog Day Great Again,” one reads. “Draft Phil for Shadow Representative,” reads another. As a gust of wind blows through Dupont Circle, the crowd collectively chants: “We love Potomac Phil!”

Potomac Phil made an appearance this morning at the annual Dupont Circle Groundhog Day in NW D.C. After an introduction and a moment of intense silence, Phil, standing tall and proud, made his prediction: six more weeks of blistering cold.

Aaron Denu, Chairman of the District’s Dupont Festival Series, first organized the event in 2012. Since then, the festival has expanded. It now features an accordion player, a religious blessing by a rabbi, and free cookies and coffee.

Denu acquired Phil in 2012, but the groundhog passed away two years later. This didn’t stop the festival, though. Reluctant to give up his lovable friend, Denu enlisted a taxidermist to memorialize Phil.

Congregation Har Shalom Hazza Henrique Ozur Bass blessed Phil before the groundhog made a prediction. Bass believes that religion can unify communities even on secular holidays, he said.

“Every event in American civilization needs to be couched in the principles that brought this great country together, which are the principles of freedom and liberty, but also trust in the divine,” Bass said.

Many D.C. residents regularly attend the festival. Festival-goer Michaela Sweet appreciates the unifying atmosphere of the event, she said.

“It’s a lot of fun. A lot of top hats, shouting and singing,” Sweet said. “What a fun way to start a Friday morning.”