The Black and White • September 23, 2022 • https://theblackandwhite.net/73139/news/mcps-implements-new-security-measures-at-high-school-athletic-events/ 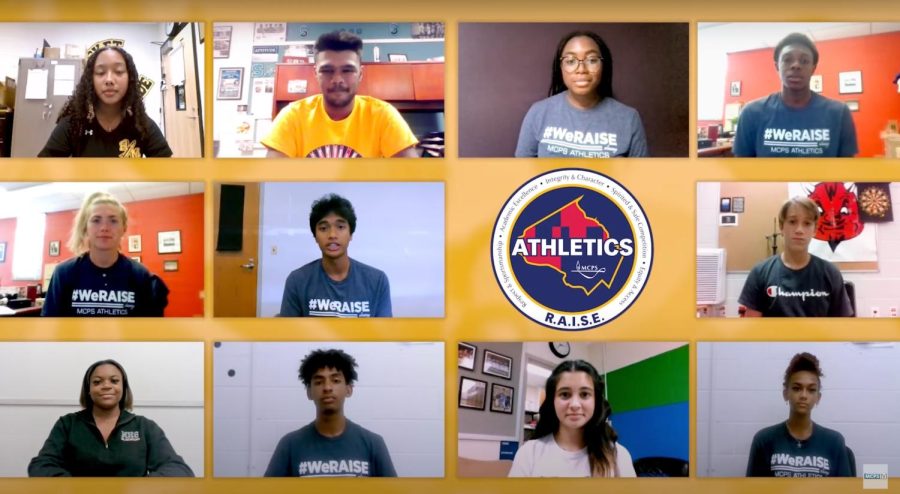 In a video recording from a Student Athlete Leadership Council meeting, students called on their peers to renew their commitment to sportsmanship guidelines that include respecting other players and coaches, avoiding confrontations with referees and cheering on student athletes from the stands.

MCPS officials announced new security measures for high school athletic events after violent altercations led to multiple arrests and an injury at a Gaithersburg High School football game last Friday. The enhanced security procedures take effect tonight, and will remain in place for the remainder of the season, officials wrote in a press release on Wednesday.

The school district’s new “Athletics Safety Plan” requires student spectators from competing schools to display a school-issued ID or Synergy verification to gain entry to the sporting events, and prohibits students from non-competing schools from attending games without an adult chaperone. The regulations also exclusively restrict student seating to the stands and prohibit both new entries and re-entry after half-time.

MCPS will also station additional school security personnel at entrances, exits and high-traffic areas, according to the press release.

The enhanced regulations come less than a week after multiple brawls at a Sept. 16 football game between Northwest and Gaithersburg High Schools ended in the arrest of four juveniles and a 19-year old man. On Monday, Gaithersburg High’s athletic director filed a citizen’s complaint against Northwest High School’s head football coach for an alleged assault that took place during the fight. School district administrators temporarily suspended the varsity football program at both high schools.

“Unruly, displeasurable behavior in our games [is] contrary to our values,” Superintendent Dr. Monifa McKnight told reporters at a press conference on Wednesday. “When that happens, we have to address it, we have to act swiftly and we have to act together.”

“I think what they have decided to implement is in everyone’s best interest,” Whitman security team leader Mitchell Dove wrote in an email to The Black and White. “Everyone’s safety is what really matters right now.”

In the Wednesday announcement, the school district also warned that any similar incidents or behavior will result in suspension of teams and individual players, or exclusion from postseason competition.

Student athletes from schools across the county expressed concerns surrounding disrespectful behavior at athletic events during a Student Athlete Leadership Council meeting on Thursday. In a video recording from the meeting, students called on their peers to renew their commitment to sportsmanship guidelines that include respecting other players and coaches, avoiding confrontations with referees and cheering on student athletes from the stands.

“I think the new guidelines are for the best,” said varsity football player Ben Scholtterer, a junior. “They will control any incidents that could happen and ensure safety for everyone at the games.”