The Black and White • September 22, 2022 • https://theblackandwhite.net/73090/news/graffiti-found-at-pyle-middle-school-contained-racist-and-homophobic-slurs-antisemitic-symbol/ 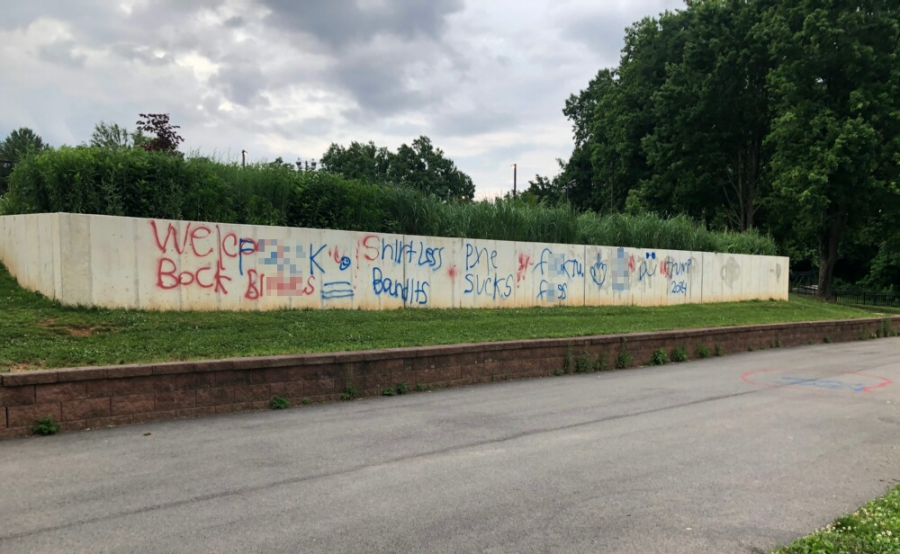 Pictured: graffiti from the June 25 act of vandalism, which contained the f-slur and sexually explicit images.

By Harper Barnowski and Darby Infeld

Graffiti discovered at Pyle Middle School this summer contained antisemitic symbols and both racial and homophobic slurs, Pyle Principal Christopher Nardi wrote in an email to The Black & White.

New information about the content of the graffiti emerged after police arrested and charged two boys in late August in connection with three separate instances of vandalizing a retaining wall behind the school.

According to a police press release, school security first encountered the graffiti during night patrol on June 25 after witnessing two individuals fleeing the scene by bicycle. The Black & White has verified that graffiti from the June 25 act of vandalism depicted the f-slur and sexually explicit drawings.

The July 16 act of vandalism took place on the school’s walls, basketball court and track, and included swastikas and the n-word, according to Nardi. The perpetrators graffitied the school a third time on August 21, defacing a wall near the school’s baseball field, according to police.

“Symbols of hate, bias and discrimination are harmful and unsettling for everyone in our community,” Nardi wrote. “It was shocking and concerning when it occurred.”

The two boys were arrested and each charged with three counts of malicious destruction of property on August 26. Police later released them from custody to their parents and transferred their cases to the Montgomery County Department of Juvenile Services, according to police.

“[This incident] does not reflect the values of our school, our community or our school system,” Nardi wrote. “We are a wonderfully diverse community, and we must continue to take a stand against acts of hate.”

Pyle’s building services team removed the graffiti after each of the three acts. However, the vandals’ messages remain troubling to students at the school, like eighth grader Caroline Dorning.

“It makes me feel sad that some people would want to attack other people like that,” Dorning said. “I feel like a lot of people who the graffiti could have been aimed at would have felt really bad, and like they weren’t safe to go to Pyle because they might be made fun of for part of who they were.”

Freshman Sienna Rancilio saw the graffiti during a sports practice at Pyle, and said that she found the profane messages unsettling.

“I feel uncomfortable knowing that people would do this,” Rancilio said. “It’s rude and disrespectful to the school and to other people.”

The recent acts of vandalism are the latest in a series of graffiti incidents in the Whitman school cluster. In 2011, MCPS maintenance cleaned graffiti depicting a bomb detonating on an exterior wall of the Pyle cafeteria.

Pyle counselors plan to address the graffiti in classes by facilitating discussions about the school’s core values of equity and character in the coming weeks, Nardi wrote.

Some teachers commented on the graffiti during class on the track the first week of school, according to Pyle sixth grader Caroline Conroy.

“The P.E. teachers said it wasn’t okay to destroy property,” Conroy said. “[And] morally it’s unacceptable and reflects badly on the school.”

Dorning also said that one of her teachers addressed the acts of vandalism by sharing a story about their child, who would’ve been targeted by the graffiti if they had attended the middle school.

MCPS may apply disciplinary measures in accordance with its Student Code of Conduct, according to police. School district officials are also working with Pyle administrators to determine the feasibility of installing security cameras on the lower field, where the recent vandalism occurred, Nardi wrote.

The middle school’s principal sent an email to parents in which he characterized the graffiti as “disgusting,” and wrote that any students involved could be criminally prosecuted.

“I was disappointed and upset that this incident occurred,” Nardi wrote in an email to The Black & White. “Our community must continue to take a stand against acts of hate.”