The Black and White • September 19, 2022 • https://theblackandwhite.net/73038/news/whitmans-new-pep-band-debuts-from-the-stands-replacing-traditional-marching-band-performances/ 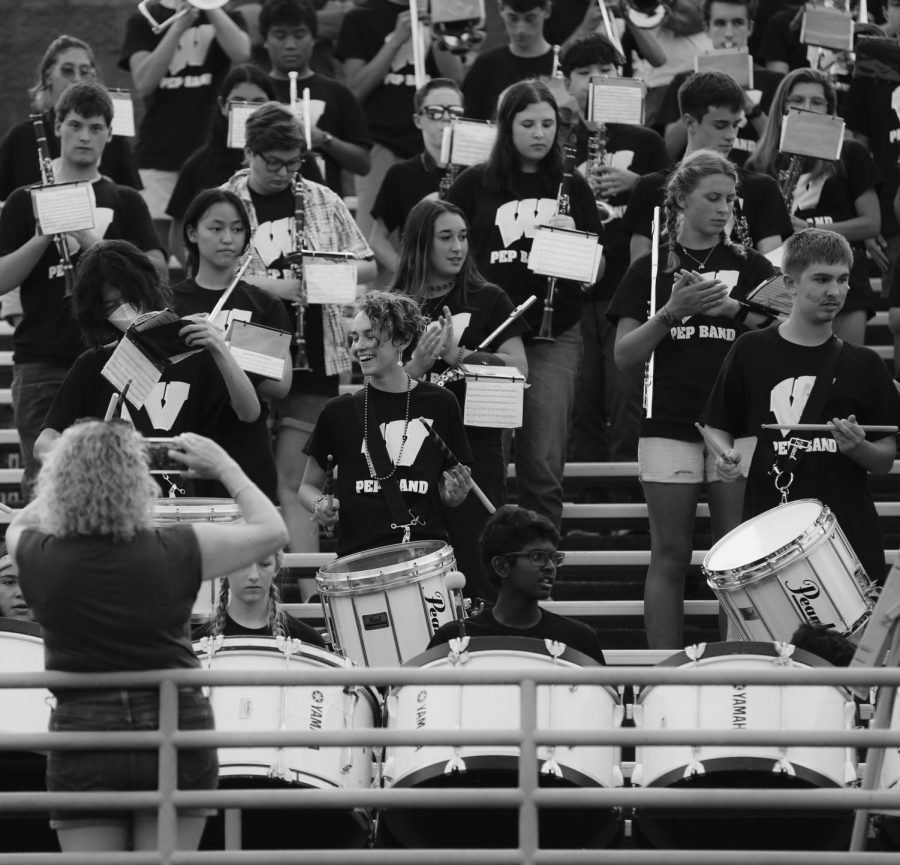 Whitman’s new Pep Band debuted from the stands of Jerome M. Marco stadium this fall, replacing the traditional Marching Band that had performed during halftime shows at football games. Instrumental Music director Brendan Kelly said that the change will make participating in the band more accessible for students.

Unlike Marching Band, which played on the field during halftime, Pep Band will perform exclusively from the stands at football games and may perform at some basketball games, according to Kelly. Pep Band will also deliver its rendition of the National Anthem in the stands instead of from the field.

By replacing Marching Band with Pep Band, Kelly said that he sought to open opportunities for students who don’t take band classes and allow band students to opt out of performing at football games without negatively impacting their grades. Before the 2022-2023 school year, performing with Marching Band at three or four of the football games was a requirement for all band students.

“This year we have 12 people who are either taking chorus or can’t be in a band class because of an AP conflict,” Kelly said. “There were a lot of students in our band classes who didn’t like playing at the football games.”

Junior Will Mayo plays the clarinet in Pep Band and said that he supports the recent changes to the band’s organization.

“I definitely think making Pep Band voluntary was a necessary change,” said Mayo, who played in Marching Band as a sophomore. “There’s still a lot of people who want to be involved and it just makes it a more fun experience for everyone because everyone there wants to do it and put in the work.”

Playing with fellow students who didn’t enjoy marching at games dampened the spirits for everyone involved, he said.

Though Pep Band will not perform a marching routine during halftime at football games, Kelly may reintroduce that aspect at a later time, he said.

The new band will also play snippets of songs instead of full pieces. Still, senior Becca Levy, who plays mellophone in Pep Band, said that there are similarities between the music that Marching Band played and Pep Band’s new repertoire.

“I’d say a third to half of our music is staying the same from Marching Band,” Levy said. “We have a few more interactive songs which I think is really exciting.”

Kelly also plans for Pep Band to start performing at basketball games during the winter season, he said. As the band builds spirit from the stands, Kelly said that he hopes to bring music to other school events like pep rallies.