The Black and White • June 21, 2022 • https://theblackandwhite.net/72645/feature/maryland-was-the-best-choice-princeton-basketball-star-abby-meyers-17-transfers-to-umd-for-final-year-of-college-basketball-career/ 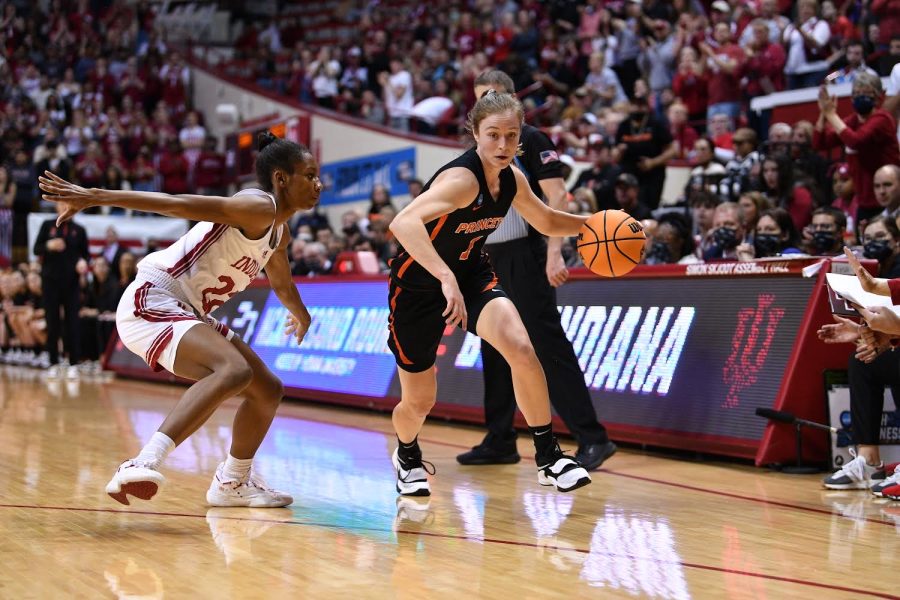 Abby Meyers drives on University of Indiana guard Chloe Moore-McNeil in the second round of the 2022 March Madness tournament.

On April 15, Whitman basketball’s all-time leading scorer and Princeton basketball star Abby Meyers announced that she plans to transfer to the University of Maryland (UMD) at College Park to compete during her final year of collegiate basketball eligibility.

The 2022 Ivy League Player of the Year spent three years playing basketball at Princeton, and played two games in the 2022 NCAA March Madness tournament. Before announcing her transfer to UMD, Meyers’ career at Princeton came to a close with a narrow defeat to the University of Indiana in the second round of the annual tournament.

Meyers was only able to play at Princeton for three of her four years at the university after the COVID-19 pandemic forced the Ivy League to cancel its 2020-21 basketball season and suspend the 2020 season in March. Since many student athletes couldn’t finish their four-year collegiate sports career, the NCAA granted an extra year of basketball eligibility to athletes with truncated seasons.

However, Princeton doesn’t allow athletes to participate in more than four seasons of a sport within five calendar years of the start of full-time collegiate enrollment. Since Meyers enrolled in 2017 and isn’t eligible to play another year at Princeton, the basketball player decided to transfer to UMD and enroll in a one-year masters degree.

“I went to college hoping to play four years [of basketball], and that’s what I’m going to do at the end of the day,” Meyers said.

The Princeton guard said that there were several factors that drove her to decide on UMD, including its proximity to her family, she said.

“I wanted to be closer to home and I wanted to play at a much higher level of basketball that will propel my individual level,” Meyers said. “Maryland was the best choice.”

After Meyers announced her decision to play for the Terrapins, a series of UMD starting players announced that they were transferring from the school— guard Ashley Owusu to Virginia Tech and forward Angel Reese to Louisiana State. Additionally, two other starters for the Terrapins this past season graduated; guard Katie Benzan and forward Chloe Bibby. This turnover opens a new spot for Meyers as a leader on the Maryland team, according to Meyers.

“I think [the] Maryland players, they’re gonna be athletic. They’re gonna be ferocious on defense and great on offense,” she said. “But I think the missing piece is a consistent leader, and so I’m going to try and fill that role as best I can.”

Whitman’s girls varsity basketball head coach Peter Kenah, a social studies teacher, coached Meyers for all four years of high school and believes that her experience and leadership will be helpful to the Terrapins next season, since the recent roster changes will push UMD to start fresh. Meyers’ experience competing in two NCAA tournaments and winning the Ivy League conference three times will make her an asset to the team, Kenah said.

Her scoring prowess is another skill set that the Terrapins will find important, according to Kenah.

“Even on her worst days, when her shots aren’t falling, she just finds a way to score points [and] to get to the free throw line,” he said.

Meyers’ dynamic scoring ability has been part of her arsenal since she started playing for the Vikings as a freshman in 2013. Her shooting capacity helped propel the Vikes to a state championship in 2016. Meyers scored a team record of 21 points in the finals against Western High School to lead the Vikes to a 71-55 victory. The team’s passion and dedication to basketball were both crucial to the dominating win, with the state championship being “a cherry on top” after an intense season, according to Meyers.

On the heels of a successful high school basketball career, the transition to collegiate basketball was rockier than she expected. More strenuous training led to tougher injuries that made it hard to compete and improve at the level that she was used to, Meyers said.

One year into her Princeton basketball career, Meyers was placed on a year-long academic suspension due to academic misconduct. While Meyers’ goals for basketball were disrupted and her sophomore year was “more bumpy than [she] expected,” the star basketball player used the probation as an opportunity for growth, she said.

“I was able to actually focus on my own identity outside of the narrow confines of basketball and being a student at Princeton,” she said.

“I wanted to end my year with personal, but also team success,” she said. “I wanted to win an Ivy tournament, I wanted to go to the NCAA tournament, [and] I was really focused on my team and less on myself. I really had a great team around me during the season.”

After this exciting conclusion to her basketball career at Princeton, Kenah is certain that Meyers and the Terrapins will find success during this upcoming season, he said.

“Abby has shown that she can score against the highest level of competition,” he said. “She’s going to come in with a lot of confidence, being the Ivy League Player of the Year. So I could see her starting, being one of the top scorers on the team and helping them make a deep run in the NCAA Tournament.”