The Black and White • June 23, 2022 • https://theblackandwhite.net/72642/opinion/concert-review-phoebe-bridgers-at-the-anthem/ 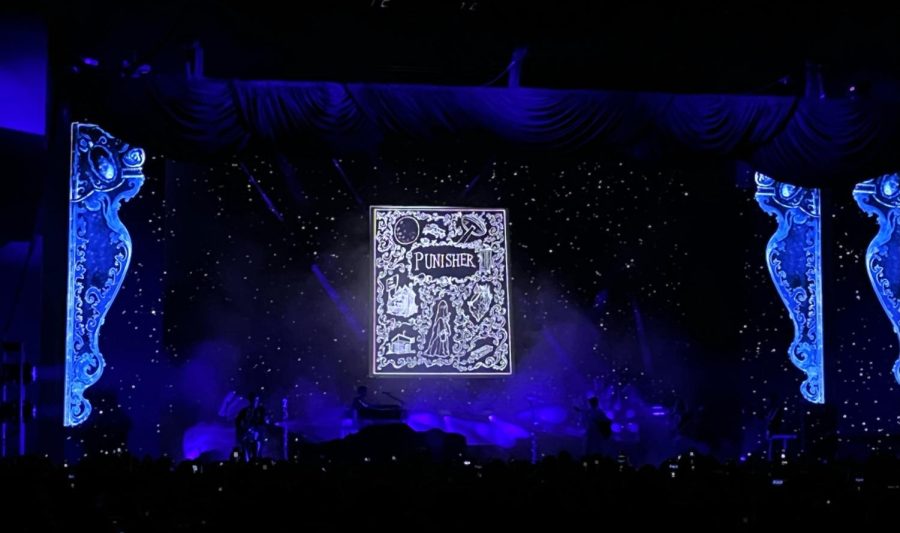 Fans each brought their own experiences and emotions to the concert, and could find solace in her messages even if the lyrics weren’t directly applicable to their circumstances. Bridgers channels the emotions of the crowd through the pure passion that she brings to her shows.

By Kate Rodriguez and Natalie Easley

“I hate you for what you did. And I miss you like a little kid.”

The iconic lyrics from Phoebe Bridgers’ hit song “Motion Sickness” echo throughout The Anthem concert hall as the 26-year-old artist takes the stage. A heavy drum beat kicks in and a bass guitar strikes a high, loud note, while flashing red and blue lights illuminate the venue. The crowd instantly comes to life and jumps to the rhythm, enthralled by the performance.

Phoebe Bridgers has emerged as one of the biggest names in alternative music over the past year, taking the indie genre by storm. She rose to fame in the early months of the pandemic, and has since solidified her reputation by collaborating with high-profile artists such as Taylor Swift  and Kid Cudi.

In June 2020, Bridgers released her critically-acclaimed sophomore album “Punisher.” After COVID-19 safety protocols forced Bridgers to postpone her 2021 tour for the album, the 26-year-old musician played two sold-out shows in Washington D.C. on June 11 and 12.

We attended the show on the evening of June 12, where the graphic design was a highlight of the performance. Projections covered the length of the stage, displaying animated images that correlated with each of the songs; showing a story book containing a fantastical garden for “Garden Song” and a cityscape with a cosmic UFO overhead for “Chinese Satellite.” The animations enhanced the emotion of each song and added an element of visual spectacle to the performance.

Bridgers seemed at ease when interacting with the audience throughout the show, speaking directly to the crowd and explaining the meaning behind her songs.

After a fan threw a bra on stage midshow, Bridgers made a confession as she leveled with the crowd.

“I haven’t worn a bra in like eight years,” she said. “But I keep them all. Just so you know, I don’t know if that’s weird.”

Bridgers’ self-awareness and relatability provide the basis of her appeal; to many of her listeners, she feels like another version of themselves. Her quick wit and clever wordplay are evident not only in her lyricism, but in her stage presence as well. The frequent one-liners and thoughts she delivers to the audience feel like one half of a conversation that you might have with a friend over lunch, and it’s easy to forget that you’re one of many people who are connecting with her banter in the same way. Still, the realization that you’re not the only one who connects with Bridgers on this same level doesn’t make the experience feel any less special— if anything, it makes you feel less alone.

Fans each brought their own experiences and emotions to the concert, and could find solace in her messages even if the lyrics weren’t directly applicable to their circumstances. Bridgers channels the emotions of the crowd through the pure passion that she brings to her shows.

Following her performances of “Motion Sickness,” “DVD Menu” and “Garden Song,” Bridgers played her most-streamed song on “Punisher,” “Kyoto.” In her performance of the hit track, Bridgers used strident instrumentals and immersive visual effects — a fitting choice for the most upbeat track on the album. Adhering to the conventions of classic rock, Bridgers also discussed her sometimes loving — and often tumultuous — relationship with her father in the track, juxtaposing loud and energetic instrumentals with somber lyricism.

“I want to kill you, if you don’t beat me to it,” Bridgers called to her father, referencing his self-destructive struggle with addiction.

Bridgers’ unique ability to translate her own experiences into songs that are as lively as they are devastating is another aspect that draws fans to her music.

Another standout performance of the night was “Moon Song,” a harrowing ballad about a relationship in which one person submits themself entirely to the other. Bridgers performed the song with relatively subdued instrumentals, allowing for a greater focus on the vocals.

Fans screamed along cathartically to the heartbreaking lyrics: “You are sick, and you’re married, and you might be dying, but you’re holding me like water in your hands.”

The song concluded with Bridgers’ silhouette contrasting against a projected image of a full moon behind her, returning to the powerful central metaphor of the song in which Bridgers describes her futile attempts to deliver the moon to her partner as the ultimate act of servitude, despite receiving nothing in return.

The climax of the concert came as Bridgers performed “I Know The End,” the final track of “Punisher.” Inspired by her experience of stumbling upon a rocket launch during a road trip through California and mistaking it for the apocalypse, Bridgers explores existentialism and self-reflection in this unhinged song.

As the instrumentals built tension in the room, the screens surrounding the stage displayed images of a house slowly catching fire.

“No, I’m not afraid to disappear,” Bridgers declares in the final verse of the song. “The billboard said ‘The End Is Near.’”

The end of the recorded track features stripped-back vocals, as a hoarse Bridgers screams into the abyss. In the live performance of the song, the crowd joined in, leaving fans with stinging throats, teary eyes and an unparalleled feeling of absolute release.

Throughout the tour, Bridgers has alternated between two titles for her encore: “Waiting Room” and “Georgia.”

“I’m going to get weird,” Bridgers announced before diving into “Georgia,” a more experimental track from her first album. Although she didn’t perform “Waiting Room,” a track from her early career, even the most stubborn fans of the song didn’t hesitate to join in the new community developing among the concertgoers through the crowd during the final song of the evening.

Bridgers poured unbridled emotion into the performance. Belting the final lyrics unaccompanied, she wrapped up a spectacular show.

“If I fix you, will you hate me?” Bridgers concluded. “And would you fuck this and let us fall?”