The Black and White • June 19, 2022 • https://theblackandwhite.net/72599/opinion/how-i-learned-to-let-go-my-experience-with-the-floating-rock-mentality/

How I learned to let go: my experience with the floating rock mentality 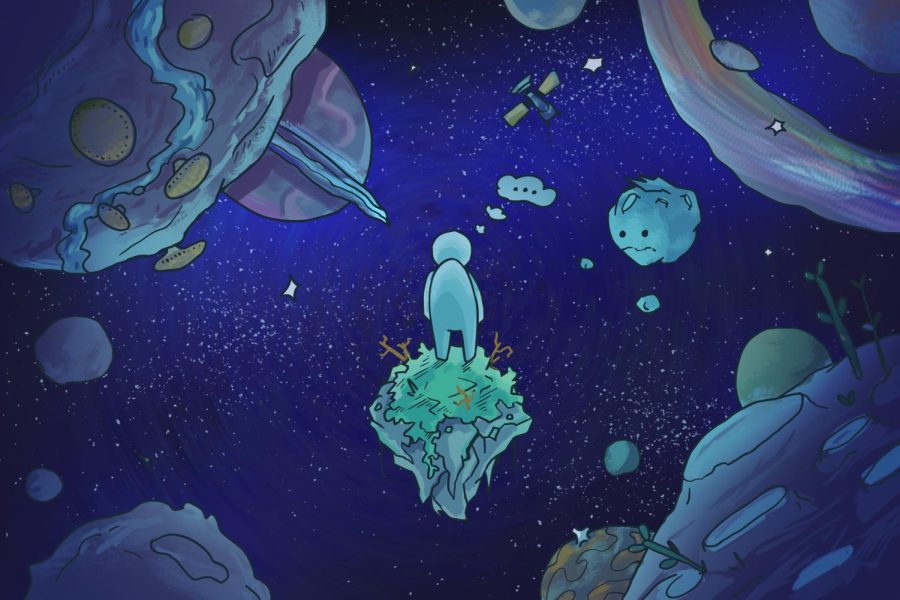 It soon became clear that certain factors were within my control, like how much time I spent studying for a test or the people I chose to become friends with, and that stressing out over things that were out of my control wasn’t productive. Instead, I found peace in accepting the chaos.

My phone pings with a notification from the Canvas app, alerting me that my Chemistry grade is available to view. After solving practice problems and reviewing terms, I felt as prepared as I could be for my stoichiometry test, but had still experienced heightened anxiety since the day of the exam. I hold my breath as I click on the notification, only to feel my heart sink as I register the 65% test score displayed on my screen. A wave of distress begins to sweep over me, but then I wonder: does any of this really matter?

In recent months, the floating rock mentality has taken TikTok by storm. The mindset suggests that everyday problems lose significance when considering the bigger picture, because we’re all just living on a floating rock. Among Gen Zers, this mentality is quickly emerging as the prevailing interpretation of absurdism — the theory that the universe is irrational and that the search for order brings one emotional turmoil.

I first encountered this mindset in January while scrolling through my TikTok feed. I watched as creators swore off homework, studying and other unenjoyable educational tasks because “we’re on a floating rock, so school doesn’t matter.” My initial reaction was negative — the floating rock mentality seemed like a convoluted excuse for laziness and neglecting responsibilities. Sure, it’s true that we live on a floating rock, but that doesn’t mean we should be careless.

However, the past few months have taught me that there may be some merit in this idea.

In March, my mental health began to rapidly deteriorate. I was halfway through the second semester and I found myself drowning under immense pressure to succeed. Struggling under the weight of my own extreme standards, I expected myself to earn high grades, gain acceptance into a prestigious college and forge a path towards a successful future career — and anything that would jeopardize my chances at this success would cause me to spiral. Beyond school-induced anxiety, I had to deal with my parents’ recent divorce and the stress of my social life. As a feeling of hopelessness overwhelmed me, I began to search for coping mechanisms.

Initially, I recited “we live on a floating rock” ironically. I used the phrase as a joke to ease the pain of a bad grade or awkward interactions with my friends. As I continued to incorporate this mindset into my daily life, however, I began to realize that the joke was heavily influencing my daily mood.

To survive under the constant burden of the taxing variables I was facing, I started to accept the reality of how little power I actually had over these aspects of my life. It soon became clear that certain factors were within my control, like how much time I spent studying for a test or the people I chose to become friends with, and that stressing out over things that were out of my control wasn’t productive. Instead, I found peace in accepting the chaos.

Once I had accepted this lack of control, I quickly learned the value of prioritizing my mental health over my school workload. It wasn’t difficult to choose between a relaxing, early night of self-care and doing my homework until midnight. As I indulged in this self-care in moderation, I began to internalize the notion that my happiness was more important than straining my current self for an unknown future.

Still, the floating rock mentality isn’t flawless. It certainly isn’t an all-encompassing solution to anxiety, and the idea that nothing matters shouldn’t be an excuse to abandon your responsibilities or harm someone else. However, the true message of the floating rock mindset holds value.

Billions of people have been born over the course of hundreds of thousands of years, each with their own problems and contributions to society. Even though they may all have been specks of dust, living on a floating rock and soaring through an infinite galaxy, their lives weren’t pointless and neither is yours. So, while you’re on this floating rock, focus on the things that are important to you — not on worrying about your Chem test grade.