The Black and White • June 17, 2022 • https://theblackandwhite.net/72585/feature/economics-teacher-wayne-jacobson-retires-after-25-years-at-whitman/ 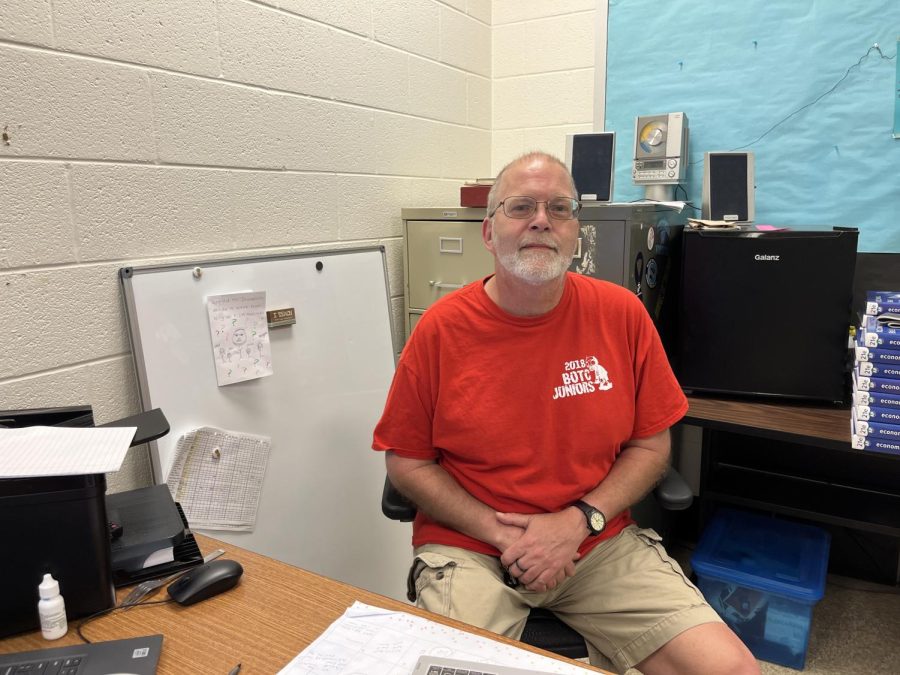 After 25 years at Whitman, Economics teacher Wayne Jacobson is retiring at the end of the 2021-2022 school year.

Since his first year at Whitman in 1998, Economics teacher Wayne Jacobson has brought lived experiences and knowledge to the classroom, incorporating relevant examples into his lessons to prepare his students for the real world. After a 25-year teaching career, Jacobson is retiring at the end of the 2021-2022 school year.

Jacobson’s inspiration to pursue teaching struck in a rather unorthodox way. In college, most of his peers had already set their sights on a particular career, but Jacobson first considered teaching as a career path in his late twenties.

“Throughout my 20s, I traveled a lot and I’d saved a ton of money,” Jacobson said. “I was going to take a year and travel around the world. But I saw newspaper stories about a teacher shortage, and so I decided to take that money and put it towards getting my teaching degree instead of traveling.”

After attending Montgomery County Community College for five years, Jacobson earned a degree in American History from the University of Maryland. He completed his Bachelor’s degree in Secondary Social Studies Education from the University of Maryland in 1998, and began teaching at Whitman soon after. Despite following a lengthy academic path before deciding to pursue teaching, Jacobson said it was one of the best decisions he has made.

One of Jacobson’s favorite parts of teaching is observing the unique way each lesson unfolds in the classroom.

“Every day is different,” Jacobson said. “You could be teaching the same topics, even the same lesson from last year, but it’s gonna come out completely different.”

Throughout his career, Jacobson has embraced this mentality by teaching a wide range of courses, including U.S. History, U.S. Government, Business and Leadership classes as the SGA sponsor. However, he hadn’t taught above the honors level until 2018, when administrators offered him the opportunity to teach AP Microeconomics and Macroeconomics. Jacobson decided to take the opportunity to challenge himself, he said.

Jacobson acquired his understanding of business and economics from working in retail service and management for twelve years, which helped him fund his college education. During the five years he took classes at Montgomery College, Jacobson worked retail positions, and used his earnings to enroll in courses each semester. As one of ten children in a working-class family that encouraged self-sufficiency, Jacobson developed a strong work ethic early on, he said.

Incorporating his own personal knowledge and anecdotes in the topics into his lessons is a hallmark of Jacobson’s teaching style, as it allows him to most effectively keep students engaged, he said. Jacobson currently teaches AP Economics, International Business and Personal Finance, but put his American History degree to use as a U.S. History and U.S. Government teacher earlier in his career.

For sophomore Pedro De Bolle, the most unique element of Jacobson’s teaching is his incorporation of personal experiences that relate to class content. The teacher’s real world examples make the class more dynamic, said De Bolle, who takes both AP Economics and International Business with Jacobson.

“He often brings contemporary issues to the table, and talks about how his stocks are doing,” De Bolle said. “He ties economic issues into his own life, talking about things like how gas prices are going up, how the market is dealing, and how his retirement fund works.”

Senior Noah Pearlman, who took AP Economics with Jacobson, feels that Jacobson’s class has given him a strong base of knowledge to build upon in college business and economics classes, he said.

“Economics really is the foundation to a lot of the way that a lot of businesses work,” said Pearlman, who leads Whitman’s DECA chapter. “[Jacobson’s class] has given me a deeper understanding of how the practices work, and why things work the way they do. That sets you up for success in whatever you’re pursuing.”

The senior added that the skills he learned in Jacobson’s AP Economics class also helped him succeed at the club’s business competitions.

In retirement, Jacobson hopes to spend more time on volunteer work and household chores, he said. Still, he anticipates that the itch to be in the classroom will return, and expects that he may be back at Whitman as a substitute teacher, he said.

After 25 years of bringing his own experiences to life in the classroom, Jacobson believes that students should keep an open mind as they pursue their future career paths.

“Keep your eyes open for opportunities,” Jacobson said. “So many Whitman kids seem focused on certain goals, but you have no idea how your life is going to turn out.”