The Black and White • June 15, 2022 • https://theblackandwhite.net/72568/feature/there-are-ways-to-help-for-everyone-students-unite-in-an-effort-to-support-ukraine/

“There are ways to help for everyone”: students unite in an effort to support Ukraine 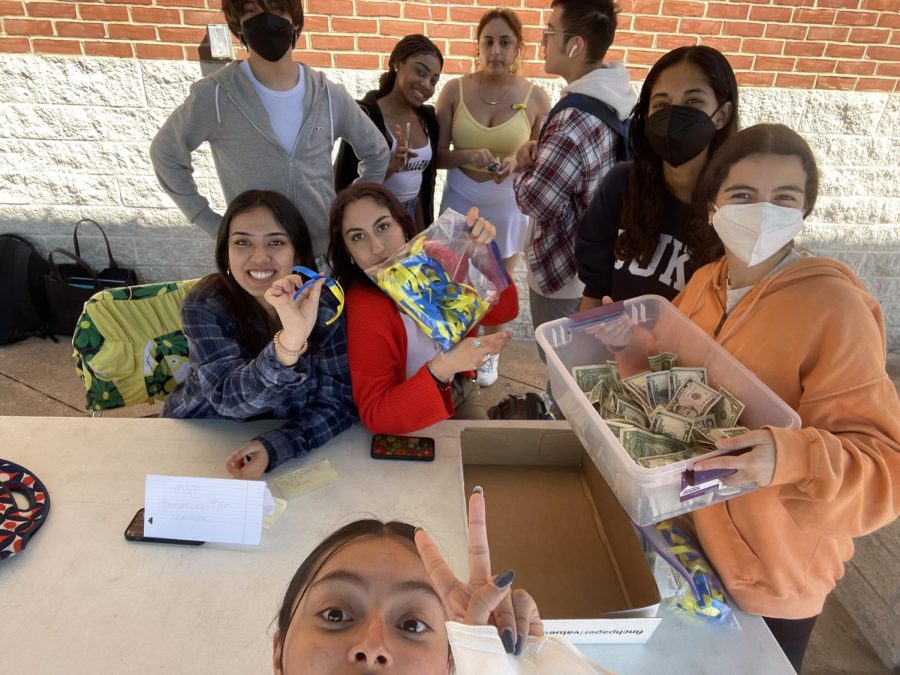 The dawn of Feb. 24 brought a harsh change of reality for millions of Ukrainians as thousands of tanks flowed across their country’s borders, and missiles rained down onto their streets. In the four months since Russia launched its “special military operation” in the east European country, an estimated seven million citizens have fled across international borders, but nearly 40 million people remain in their home country.

Beyond Ukraine’s borders, videos depicting the Russian bombing of the nation’s residential buildings, hospitals, schools and orphanages on social media allow the international community to witness the devastating circumstances under which millions of families have to flee their homes.

In response to the mounting humanitarian crisis, most countries have rallied support behind Ukraine, with the United States alone sending nearly $54 billion in emergency aid over the last four months.

As a shadow of uncertainty looms over Ukraine, Whitman students and families have come together to support the country’s defense and humanitarian efforts. Thousands of Ukrainians and allies gathered at protests across D.C. in hopes of motivating American citizens and policymakers to assist in war efforts.

Senior Mariana Piontkovska was born in Ukraine’s capital, Kyiv, where she lived for 13 years before moving to the U.S. Her extended family still resides in Ukraine, and she attended one of the first Ukrainian protests in front of the White House in late February.

“Immediately after everything started to happen with Ukraine, my whole family started to think about what we could do to help our community back home,” Piontkovska said. “Even if you don’t have a personal connection [with Ukraine], there are so many different ways that you can help out.”

In addition to gathering physical donations, the school’s club also partnered with Whitman for Change to create an online financial donation portal that benefitted Nova Ukraine, another humanitarian aid organization.

Similar to Piontkovska, senior Solomiia Kachur spent her childhood in Ukraine, but moved to the Bethesda area with her family when she was 12 years old. Since the conflict began, Kachur has attended protests in support of her country on the weekends and spread awareness about evidence of war crimes against Ukrainian soldiers and civilians at the hands of Russian forces. Most of her efforts to fight for Ukraine are targeted at providing continuous information to her Ukrainian community, and she aims to reinforce the idea that despite months passing since the initial attack, the casualties and abuses are increasing substantially, she said.

“It’s been sad to see people come to protests less and less often,” Kachur said. “At the beginning, everyone was so confused then wanted to take action, but now all of… [the] efforts to help have significantly slowed down which scares me.”

Throughout the day, Ukrainian citizens hear the ringing sound of air alerts from their phones, instructing them to take cover in nearby bomb shelters. Kachur said that she often worries about her grandparents, aunt and nieces who remain in Kyiv, where living in imminent danger has taken on a frightening sense of permanency.

“Probably a week ago, one of the [Russian] bombs fell probably 15 meters away from my grandparent’s house. Fortunately, everyone was okay,” Kachur said in March. “We try to call and check in every day because you really don’t know what’s going to happen tomorrow.”

From translating Ukrainian newspapers and Government documents to spreading information worldwide about recent attacks to assisting the Ukrainian embassy in D.C. with the redesign of their website after a cyberattack, Kachur spends hours each day assisting her country from abroad.

“Morally, I think it’s our duty as a community and nation to aid other human beings, especially when their country is suffering,” said junior Sarah Dietz, who organized the fundraiser.

Many of the fundraiser’s 12 beneficiaries assist front line workers and soldiers by preparing medical backpacks, purchasing medicine and funding hospitals while others provide aid to Ukraine’s youth population. One of the beneficiary organizations, the Voices of Children foundation, provides psychological support to children affected by war.

During the week of March 14, MSP leaders set up a donation table outside the auditorium and asked students and teachers for monetary donations during lunch periods in exchange for blue and yellow ribbons to represent the colors of the country’s flag. Student organizers emphasized that any donation — no matter how small — will benefit millions of Ukrainians affected by the war, Dietz said. In less than a week, the club collected over $400 in donations from students and staff.

As Russia continues its attack throughout Ukraine, citizens are risking their lives to receive and transport humanitarian aid to their families and others. After more than 100 days of violent conflict, there’s no clear end in sight so taking action is more important than ever, Kachur said.

“When people ask me what they can do to help, I encourage them to look for volunteer opportunities,” Kachur said. “From attending the D.C. rallies on Saturdays to going to Westland to make medical kits to filling out forums to appeal to your regional and national representatives to assist Ukraine, there are ways to help for everyone.”