The Black and White • June 14, 2022 • https://theblackandwhite.net/72564/opinion/everything-everywhere-all-at-once-weird-in-all-the-right-ways/

“Everything Everywhere All at Once”: weird in all the right ways 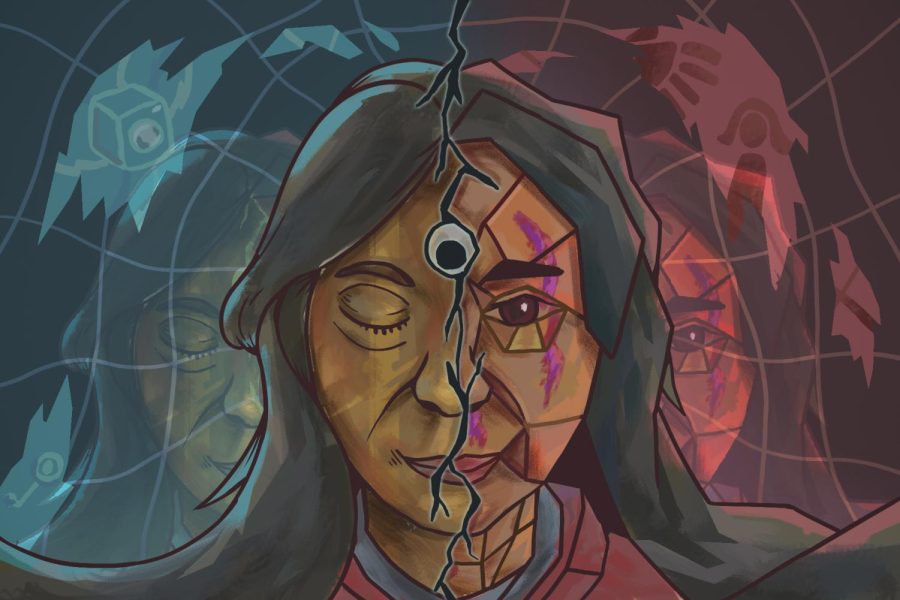 “Everything Everywhere All at Once” is a chaotically entertaining film and the directors’ courage to be boldly absurd pays off immensely.

On paper, “Everything Everywhere All at Once” is a terrible idea for a movie: a low-budget absurdist film that attempts to tackle the multiverse with slapstick humor. Toss in aggressive visuals, convoluted plot lines and an indie film studio, and it’s a recipe for a disaster. Yet, somehow, it just works.

In directors Daniel Kwan and Daniel Scheinert’s latest movie, actress Michelle Yeoh stars as Evelyn Wang, a Chinese immigrant who owns a struggling laundromat. The film picks up with Evelyn attempting to balance an IRS audit, a dying marriage and a strained relationship with her father and daughter. Her life quickly spirals out of control when a mysterious figure forces her into a sci-fi adventure to save multiple universes from a growing evil. Though the movie isn’t quite flawless — and is sometimes downright wacky — its beauty shines nevertheless.

The second and third acts of the film revolve around the multiverse — a real-life theory dictating that there are an infinite number of universes that are just like this one. As the characters explore the multiverse, they discover an infinite number of worlds in which their lives are different because of small choices they made in their home universe. As they encounter universes in which they are rich, famous, talented and perhaps most importantly, loved, the characters’ regret fuels the film’s introspective themes and deepens their emotions.

The most charming part of the movie is undoubtedly its characters; the supporting actors synergize extraordinarily well with Yeoh’s protagonist. Evelyn’s husband Waymond, played by Ke Huy Quan, adds the perfect amount of wholesomeness to Evelyn’s aggressive, cynical nature. Stephanie Hsu portrays their daughter Joy, who often challenges her parents’ actions. The three protagonists interact in an awkward, yet endearing manner and establish an entertaining, but grounded family dynamic. Supporting actress Jamie Lee Curtis is equally notable in her role as a villainous IRS agent, but no individual actor outshines the rest.

The film’s uber-relevant themes elevate it from satisfactory to phenomenal. “Everything Everywhere All at Once” tackles ideas like the struggle for self-love and self-acceptance, the difficulties of navigating family relationships and the inevitable nature of comparing oneself to others —all of which are compounded by characters observing the more successful versions of their family in other universes.

The movie also boasts much-needed Asian and LGBTQ+ representation. Nearly all of the main characters are first-generation Chinese immigrants or are of Chinese heritage, and Joy’s same-sex relationship takes the spotlight throughout the film. The film’s diversity broadens its appeal without feeling like a gimmick, and grounds the characters by keeping them relatable and authentic as they navigate a fantastical plot.

The movie’s visual effects are stunning, albeit aggressive. The film had a meager $25 million budget; in comparison, the average Marvel film — which features similar visual effects — costs approximately $192 million to produce. The motion picture’s production team also struggled with a lack of special effects editors, making the film’s impressive visuals a pleasant surprise.

The film’s style is reminiscent of a Jackson Pollock painting — bright, aggressive and a tad bit confusing. Still, its vibrant and fantastical charm doesn’t detract from Evelyn’s emotional journey across the multiverse.

“Everything Everywhere All at Once” is a chaotically entertaining film, and the directors’ courage to be boldly absurd pays off immensely. Don’t be mistaken, though, the film is far from perfect; some of the jokes flop, the visuals are excessively wild and the entire movie often appears to be on the verge of collapsing under the weight of its own ambition.

Though the movie isn’t quite flawless, it’s beautiful in its own way. The motion picture’s introspective themes, gripping performances, diverse representation and vibrant style accentuate an already-entertaining storyline.

In spite of its flaws, the directors’ passion outshines the film’s imperfections, and “Everything Everywhere All at Once” never loses sight of what’s truly important: telling an authentically human story about love, loss and regret.