The Black and White • June 10, 2022 • https://theblackandwhite.net/72507/feature/whitman-students-make-an-impact-in-costa-rica/ 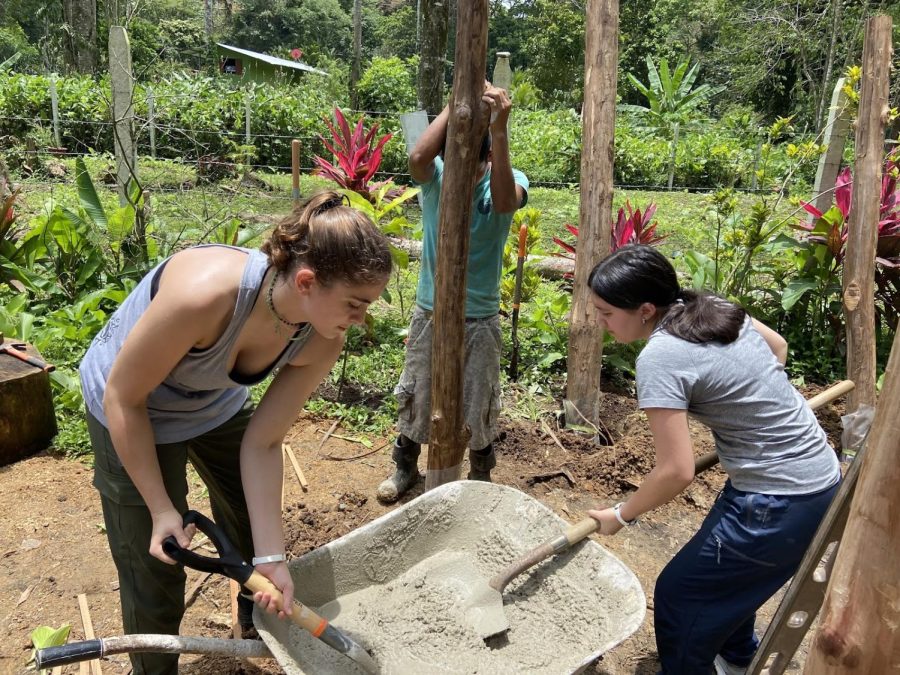 After months of preparation and coordination, a group of 19 Whitman students boarded a plane to San Jose, Costa Rica, for spring break, where they spent a week exploring the country and volunteering in indigenous communities.

For more than a decade, Whitman teachers have coordinated trips similar to this one — providing an opportunity for the school’s language-learners to explore Spanish-speaking countries like Ecuador, Peru and Costa Rica. For this trip, teachers Rebecca Zatz and Benjamin Krensky worked with Asociación Talamanqueña Ecoturismo Conservación (ATEC) to organize the service work. After two years of postponements due to COVID-19, the annual expedition returned for this year’s spring break.

The primary goal of these trips is to immerse students in service and culture while stepping outside of their comfort zone, said Zatz, who has been arranging the service trips since 2011.

“It’s a passion of mine,” Zatz said. “I love seeing new things and getting those experiences, and we’ve built such a strong relationship with people.”

This particular trip centered around helping the Bribri people, an indigenous group with a population of around 11,000 people that resides in the mountainous Talamanca region along the Caribbean Coast. Sophomore Miles Hillman attended the trip, and expanded his knowledge of the country and the way of life during the week he spent there, he said.

“I learned a lot about Costa Rica’s history and the role that the native people played in it on top of learning about their culture,” Hillman said.

The students stayed in Cahuita, a village off of Costa Rica’s Caribbean coast that is situated in a dense forest without Internet access. The isolated location came as a surprise to some of the students, said Whitman social worker Emily Callaghan, who attended the trip as a chaperone.

“It’s challenging yourself to get out of a lifestyle where things are taken for granted,” Callaghan said. “I think it just makes you realize this kind of purpose of being on this earth.”

One group of students volunteered with El Puente — a non-profit organization located in Puerto Viejo de Talamanca — and worked with the Bribri to construct new parts of the community center. The center is located near the Kekoldi Indigenous Reserve and provides indigenous families with food, clothing and other resources.

Whitman’s travelers also engaged in activities with children at the community center, making slime and playing card games with the younger kids. For sophomore Julia Grumet, forging personal connections with the kids was the highlight of her trip, she said.

“The part that made it really worth it was that the kids knew me by the end,” Grumet said. “I had to explain that I was leaving and that was very hard, but the fact that they were disappointed to see me go really meant a lot because I was making an impact.”

Grumet and her peers also enjoyed the opportunity to practice the Spanish they’d learned in school; applying language skills in a Spanish-speaking country was her main motivation for attending the trip, she said.

The other group helped renovate the village’s Iguana Conservation Center by planting native fauna and restoring paths to protect the sanctuary’s species.

After completing the service portion of the trip, students explored the town within Cahuita and observed native wildlife at conservation-focused nature centers. They visited the town’s Macaw Center and the Jaguar Rescue Center, which rehabilitates injured animals and returns them to the wild.

The group also toured a nearby jungle in the Cahuita National Park to observe native species and understand the importance of preserving their habitats.

During the trip, the student travelers spent a portion of their days enjoying the outdoors, and participated in activities like surfing lessons and hiking. They also embarked on a tour of the Arenal Volcano and explored the towns in the surrounding area. For sophomore Paola Jackson, the volcano tour and nature hikes were the best parts of the trip, she said.

“[The activities] were so eye-opening,” Jackson said. “You’re doing something that you’ve never experienced. I’ve never been to a waterfall before and swam in it, so it was crazy being able to do these things for the first time.”

While the Whitman students only spent one week in Costa Rica, the relationships and memories they created will last a lifetime, sophomore Mitra Hu-Henderson said. This year’s heightened interest will also allow for a greater number of students to embark on the trip, with two more expeditions set for the summer of 2022 to Costa Rica and Ecuador. In the future, Zatz hopes the program will expand, she said.

“I think [the experience] is something that students carry with them,” Zatz said. “We become a team and a family.”