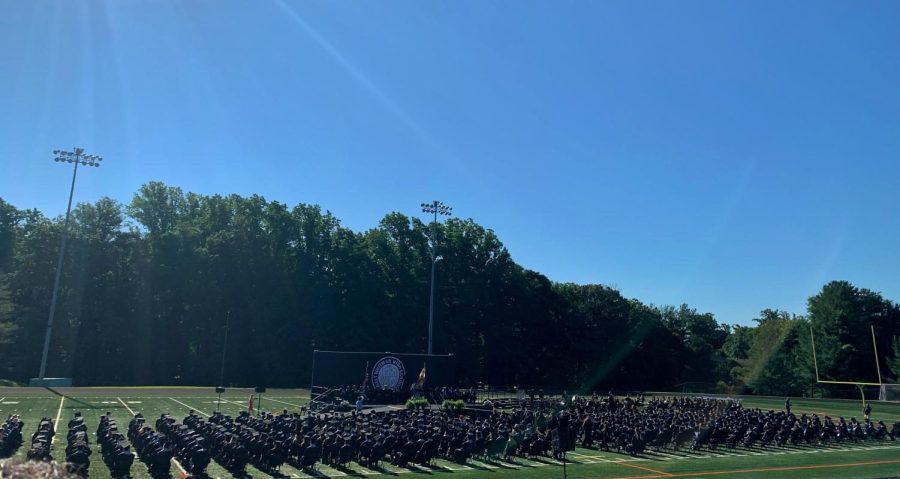 Emerging from a tumultuous four years, this year’s graduates donned their caps and gowns to attend Whitman’s first conventional graduation ceremony since 2019.

By Jasper Lester and Darby Infeld

Emerging from a tumultuous four years, this year’s graduates donned their caps and gowns to attend Whitman’s first conventional graduation ceremony since 2019. COVID-19 gathering restrictions forced MCPS to host virtual commencement events for the class of 2020 and modified in-person ceremonies with fewer attendees for the class of 2021.

Organizers held last year’s graduation ceremony on the football field to prevent the spread of COVID-19, but seniors and their guardians narrowly expressed their preference in a survey for graduation to take place at Whitman’s football stadium instead of the traditional DAR Constitution Hall venue.

Student speakers Iman Ilias, Amanda Sartori, Skylar Chasen and Felix Leonhardt reflected on their untraditional high school experience in addresses to their peers. Ilias spoke about retaining virtues from the past at the same time as looking toward the future, while Sartori and Chasen joked about the class’ far-from-ordinary path to graduation.

“What a seamless, easy and frankly uneventful four years we’ve had. Wouldn’t that have been nice?” Sartori said. “We learned together despite being miles apart. We saw how dedicated our teachers are as they formed engaging lessons.”

Leonhardt led his classmates in one last Whitman call and response “fight song,” and explained to the audience that the song — which he led at athletic events throughout the year— represents the graduating class’ attitude towards its extraordinary high school journey. The class of 2022 persevered through the pandemic and returned stronger than before, Leonhardt said in his speech.

Washington Post reporters Ashley Parker (‘01) and Yasmeen Abutaleb (‘10) delivered the commencement address, recalling their own time at Whitman and describing the unique challenges the class of 2022 has faced.

“You all navigated a global pandemic and the stress, anxiety, and unpredictability that come with that,” Abutaleb said. “You learned how to manage remote school, canceled sports seasons and plays and musicals, and time away from your friends and classmates,” Parker added.

Class of 2022 co-sponsor Jacob East, a History teacher, said that after completing most of their junior year from home, the graduating seniors were particularly intent on enjoying their return to in-person learning.

“It was evident that they had this burning desire to make up for lost time and participate and be a part of the high school experience,” East said in an interview. “I have seen more turnout this year in a variety of different events around the school and in the community.”

At the ceremony, Whitman’s Symphonic Orchestra and the combined Men’s and Women’s Choruses performed uplifting renditions of “America the Beautiful,” “Pomp and Circumstance” and “An Irish Blessing.”

In his speech to outgoing seniors, Principal Robert Dodd praised the class of 2022’s student leaders for expanding groups and programs that have helped Whitman become more inclusive, such as the Minority Scholars Program, the Black Student Union and the Leadership Academy for Social Justice. The senior class’ work set an important precedent for future graduating classes, he said.

“In the midst of a pandemic, the ongoing fight for equality and senseless violence in our nation, students in the class of 2022 took action,” Dodd said. “Students in this class began to chart a new course for our community.”

Dodd concluded his address with a testament to the strength and resolve of the graduating class after a high school experience filled with uncertainty.

“Like any unstable vessel we needed an anchor to steady us, keep us from drifting off course, or worse yet, slipping under the waves,” Dodd said in his speech. “But fortunately for our school, we have had an anchor all along. Walt Whitman class of 2022, you’ve been our anchor.”