The Black and White • June 5, 2022 • https://theblackandwhite.net/72447/opinion/whitman-teachers-expand-beyond-just-the-books/ 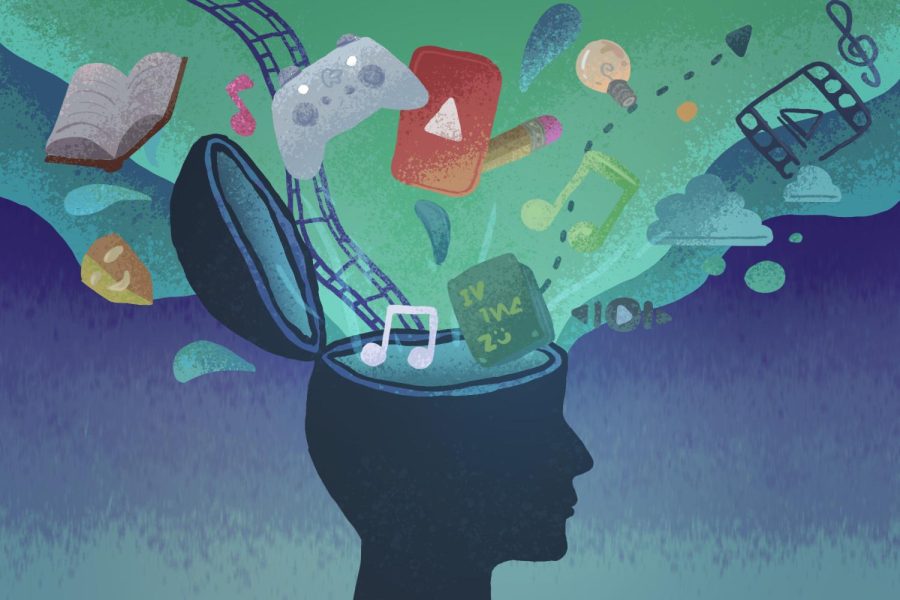 Whitman teachers should capitalize on the leeway in MCPS’ curriculum to incorporate other mediums of education into English classes.

“A perfect world is never perfect, only filled with lies. Promises are broken and more resentment come alive. Race barriers make inferior of you and I. See, in a perfect world, I’ll choose faith over riches. I’ll make schools out of prison,” – Kendrick Lamar, “Pride.”

To many, it may come as a surprise that hip-hop artists are capable of crafting literature worthy of analysis. For years, artists have used entertainment as a medium to inspire change and offer their perspectives on the world. In that sense, musicians, filmmakers and game developers aren’t very different from traditional authors — so why do authors have a formal place in the English curriculum, but other artists don’t?

Our education system deems Harper Lee’s creations as worthier of examination than Bob Dylan’s, and books like “All American Boys” as more deserving of analysis than films like “BlacKkKlansman” or “Moonlight” — but they aren’t.

Whitman teachers should capitalize on the leeway in MCPS’ curriculum to incorporate other mediums of education into English classes. A wider variety of educational materials would be more engaging for students, have greater relevance to today’s world and would be as educational — if not more — than reading traditional books.

MCPS structures both the on-level and Honors English 9 and 10 curricula to focus primarily on analyzing literature, with students typically reading at least one book per quarter. Classics like “To Kill a Mockingbird” and “Of Mice and Men” can be enjoyable, but the monotony of literary analysis often makes English class — a pivotal time in the day to challenge ideas and learn to think critically — less engaging than it should be.

Incorporating movies and music into the curriculum would bring much-needed variety to the classroom, evoking greater passion and better academic performance from students.

“It seems pretty obvious to me that if you care about a thing, you’re going to devote more effort [it],” English teacher Omari James said. “The thing you’re interested in is going to have more heart and substance and depth because you cared to think about it. That’s a massive, untapped potential in the classroom.”

While MCPS has recently incorporated more diverse material into its curricula, a substantial portion of it still clings to dated works like “The Catcher in the Rye,” “The Odyssey,” “Lord of the Flies” and Shakespeare. Modernity can’t be ignored, however, because students relate more to modern instructional materials than a collection of dated texts.

Some argue that modern forms of entertainment such as film and video games are solely amusing and lack educational value, but entertainment and education aren’t mutually exclusive.

Shakespeare presumably didn’t write plays for us to analyze; he wrote them to entertain an audience. Similarly, the video game “God of War,” for instance, entertains audiences but also tells a compelling story about a father-son dynamic. Just like “Romeo and Juliet” or “Hamlet,” the popular video game also has extensive character development, intense conflict and varied dialogue — but many educators still view Shakespeare’s art as more valuable and consequently disregard modern works that are equally educational.

“It’s cool when we bring in these other materials as peripheral resources to supplement our stuff, but they do deserve to be central,” James said. “Just because it’s pop culture doesn’t mean that it’s lacking in value.”

MCPS’ English 10 curriculum includes a set of course terms that align with each conceptual unit. Notably, the first unit of study emphasizes concepts like dialogue, diction, characterization, voice and conflict, all of which are equally prevalent — if not more — in music and film.

Through rap music, artists use figurative language, diction and syntax, while many even employ double entendres to emphasize a particular message. Similarly, character development is equally important in film as it is in literature.

“When analyzing films, students can connect these literary techniques with things like body language, facial expressions, filming style and background music,” junior Lili Dave said. “There are an endless amount of things to analyze.”

While proponents of traditional instructional materials often cite evidence that reading improves memorization, comprehension, vocabulary and critical thinking, recognizing the benefits of reading isn’t incompatible with exploring equally valuable — but more engaging — mediums. Music, for instance, similarly improves students’ language skills and memorization. Watching and listening to material could be equally valuable to student comprehension as reading. Why ignore certain mediums when they could be appropriately paired with the current curriculum?

MCPS’ curriculum requires quarterly common tasks — typically based on traditional texts — that focus on concepts like synthesis, comparison and analysis. Educators aren’t always bound to these texts and should take advantage of the curriculum’s flexibility by assigning auditory or visual materials for students to use when completing common tasks. The opportunities are endless — teachers just have to take them.

It’s time to reach beyond the curriculum’s traditionalism and the limitations of the current core texts. Whitman needs to embrace the potential of a multifaceted English curriculum.