The Black and White • May 22, 2022 • https://theblackandwhite.net/72364/opinion/mcps-deflate-grade-inflation-and-reform-the-grading-system/ 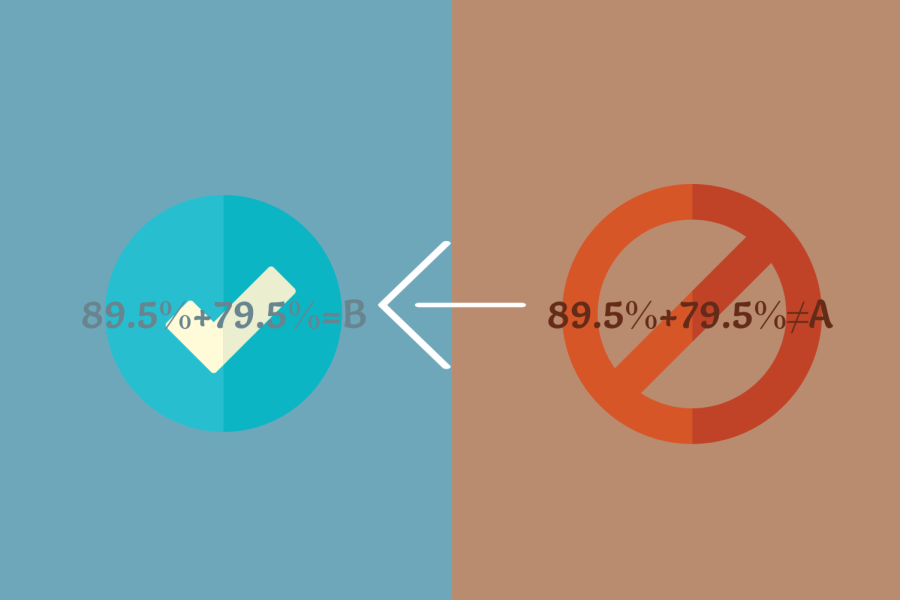 MCPS should reform its methodology so that semester letter grades are based on the numerical average of students’ quarter percentage scores, and it should begin allowing pupils to earn pluses and minuses.

Picture this: one student earns a grade of 100% in a class during the first quarter, and another perfect grade in that class during the second quarter. A second student receives an 89.5% in one quarter and a 79.5% in the next quarter. When final grades for that semester are calculated, the first student receives a higher grade on their report than the second student. Right?

Quarter grades don’t factor into GPAs, and they’re not on students’ transcripts. As a result, a student who got an A during the first quarter has no incentive to maintain that level of performance when they could simply earn a B, which would round up to a semester A.

MCPS’ grading system leads to grade inflation and incentivizes slacking. The school district should reform its methodology so that semester letter grades are based on the numerical average of students’ quarter percentage scores, and it should begin allowing pupils to earn pluses and minuses.

Under this grading system, a student who received an 86% in the first quarter and a 90% in the second quarter would earn an 88% for the semester. This would equate to a semester B+.

This new grading policy would directly curb grade inflation. The current system is ridiculously lenient, and it allows students to receive higher grades than they may deserve. In fact, the number of students who received semester A’s doubled after MCPS implemented the current grading system in 2016.

Grade inflation also decreases academic differentiation between students. Since 2016, MCPS’ “averaging” system has equated — on paper — the academic performance of students averaging an 84.5% with that of students averaging 100% over the course of a semester. To college admissions officers and internship coordinators, a student who receives a low B and a low C during two consecutive quarters looks just as qualified as a student who got two high Bs. This is unfair to students and admissions officials.

Pluses and minuses would increase the number of possible grades, allowing for greater differentiation between students. Moreover, averaging quarter grades would ensure that semester grades better represent a student’s capabilities in a class.

MCPS’ grading system also inherently encourages slacking. Since the district rounds up when averaging quarter grades, students who earn an A during first quarter lack an incentive to get a second quarter grade higher than a 79.5% — the lowest possible B — although they may actually be capable of achieving a higher score.

“I think that the semester grading policy reduces students’ incentive to be the best students that they can,” junior Jayden Ku said. “There are a lot of holes that students can find ways to crawl through just so that they can cruise straight by with a passing grade, instead of actually absorbing information.”

Averaging quarter grades could incentivize students to work harder for the entire year. If a student was aiming for a semester A- in a class and they received a first quarter A-, the student would need to get at least a high B in the second quarter in order to maintain their A-, rather than making it through the second quarter with a 79.5%.

In an informal Black & White survey of 31 students, 55% of respondents reported a decrease in the amount of effort they put into a class during the second or fourth quarter if they secured an A during the prior quarter.

Incorporating pluses and minuses into grades would help students stay engaged throughout the year because students would have to fight for every last percentage point of their grade. The final test of each quarter would matter much more for someone with an 85% in that quarter since their performance could make the difference between a B-, a B or a B+ for that semester.

Many proponents of the current grading system argue that increasing the difficulty of achieving a “good” grade would create stress for students. However, the opposite is often true. Many students currently spend an inordinate amount of time worrying about the difference between, for example, an 89.49% and an 89.5%, since one one-hundredth of a percentage point can drop students down from the supreme letter grade to the second-best out of only five possibilities. However, with pluses and minuses, an 89.5% and an 89.49% would go from being an A and a B, respectively, to an A- and an B+ — a less drastic contrast.

In addition, stress over grades may actually be a result of the current system. Rampant grade inflation leads students to feel that they must receive an A to be successful. In the same survey, 81% of students said that they aren’t satisfied with receiving a B in any class.

A larger variety of grades would reduce pressure on students to earn all As since it would be nearly impossible for students and their peers to each earn an A+ in every class.

While the transition to a more impartial grading system would force students to adjust their standards, this change would ultimately reinforce hard work, accurately differentiate learners, and prepare students for a world that doesn’t always round up.