The Black and White • May 17, 2022 • https://theblackandwhite.net/72295/sports/girls-lacrosse-stellar-season-slips-away-after-falling-short-to-bcc-11-10-in-regional-finals/ 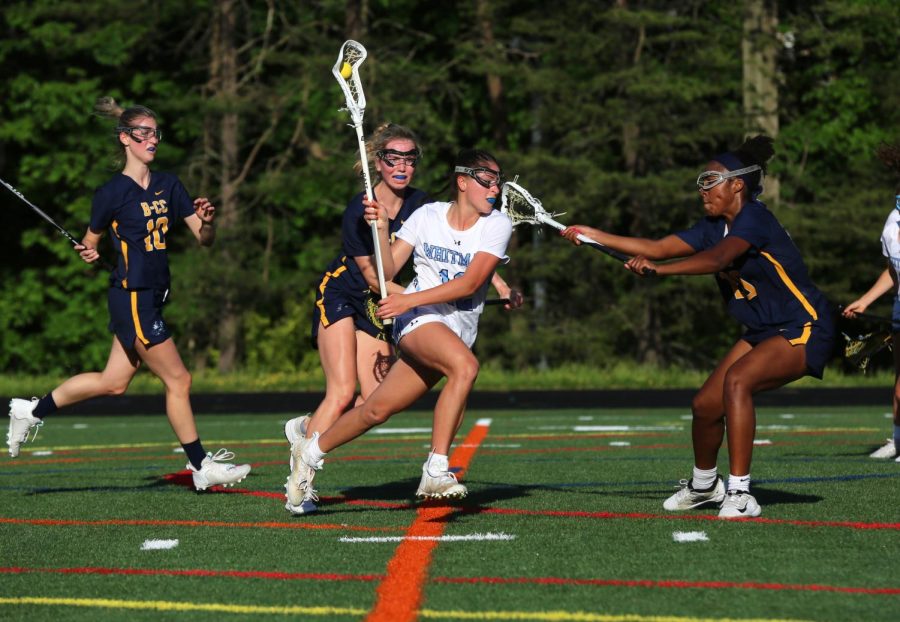 The girls lacrosse team (14–1) was unable to secure a victory at home against the Bethesda Chevy-Chase Barons (9–4) on Monday night and witnessed the end of their previously undefeated season.

Entering the day, the top-seeded Vikes had previously knocked off Quince Orchard and Richard Montgomery to earn themselves a spot in Monday’s championship matchup. Freshman Quinn Foa started off the night for the Vikes by scoring in the first 30 seconds. However, the momentum quickly shifted as the Barons were able to score six straight unanswered goals, taking a commanding 6–1 lead. The Vikes refused to go down so easy and senior Grace Nemeroff got the comeback started with her first goal of the night to get the Vikes back in the game. The Vikes continued to chip away at the deficit and eventually took an 8-7 lead heading into the locker room.

Coming out of the half, the Barons fired right back with two straight tallies to steal back the lead. The Vikes weren’t phased as Nemeroff found the back of the net once more, leaving her with a hat trick on the night. The Barons gritty defense became harder to crack as the half went on, not allowing the Vikes to get any clean shots off on goal. The BCC goalkeeper made multiple saves on free shots to keep the Barons in the game. But she wasn’t the only goalie making crucial stops — senior goalkeeper Grace Adkins made a vital save with just under 4 minutes left to propel the Vikes back onto the attack.

As the clock began to wind down, sophomore Caroline Reichert ripped a shot from the free shot position to tie up the game with just over a minute left to play. Unfortunately, the celebration didn’t last long as the goal was called back leaving the Barons on top with just a little left to play. The Vikes were unable to bounce back as the final seconds of the game dissolved.

With the 11–10 loss, the Vikes 2022 season has come to an end and they will look to earn back a spot at next year’s regional championship.