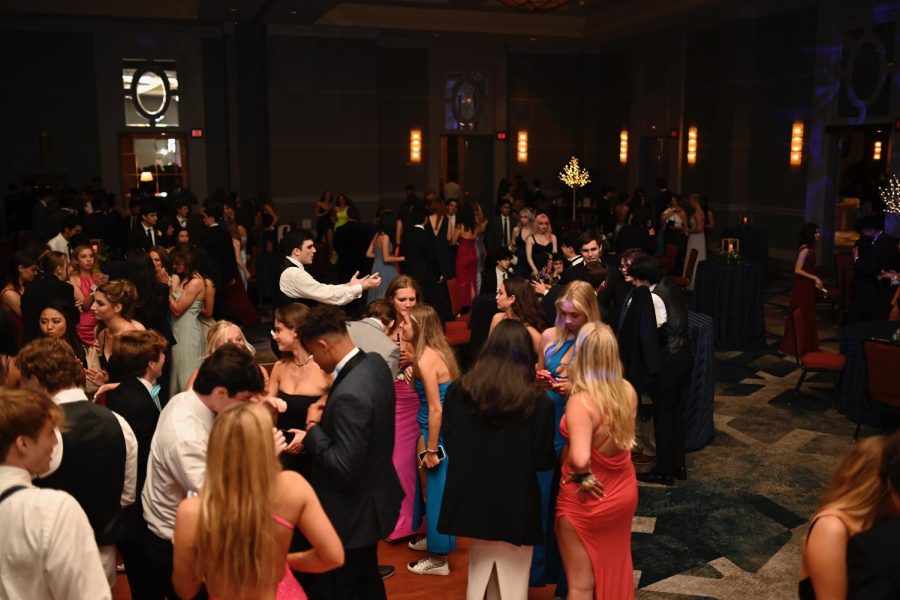 Seniors dance to music at prom for the first time since 2019.

Over 480 seniors attended Whitman’s first prom celebration in three years on May 6 at the North Bethesda Marriott in Rockville.

From 8:00 p.m. until midnight, the school’s graduating class danced to music with a DJ and enjoyed a photo booth, “mocktails,” nachos, potstickers and an ice cream sundae bar. The celebration primarily served drinks and snacks since most seniors ate dinner beforehand. Tickets cost $60 per student, and proceeds from the sales funded the event.

Since Whitman didn’t host an indoor prom event in 2020 or 2021 due to local health restrictions, many seniors were excited for the opportunity to attend the traditional celebration.

“Prom was genuinely the most fun I’ve had with the entire grade at once,” senior Allison Udler said.

English teacher Danielle Fus coordinated this year’s celebration and said that she began planning the event in October by meeting with the senior class officers to discuss options for decorations and a theme.

“This is my first year planning Whitman’s prom, so I put my own spin on things,” Fus said. “We had a colorful theme for the decor and a wide variety of drinks and snacks students could choose from.”

Early on, Fus and the student organizers reviewed catalogs of decoration options for the event before deciding to move forward with a ‘Midnight in the Garden’ theme, which entailed flower arrangements at each table.

Following the main festivities, most seniors continued their night at the annual PTA-sponsored Post-Prom celebration in the school’s gyms, which organizers had transformed into a backdrop for the event’s “Vikes World Tour” theme.

Walking into the gym, students embarked on their “World Tour” by passing through an airport security line and bag check. Past the checkpoints, attendees could dance to music from student DJs and travel between activities like an escape room, mechanical bull, casino games and inflatables.

In the hours leading up to the event, parent volunteers had covered the gym walls in drapes and set up decorated canvas walls to represent different countries.

“Over the course of the weekend we had around 150 parent volunteers come in and set up,” said Post-Prom Chair Marianne Sullivan, a Whitman parent. “When kids came in, they were really surprised at how much the place had been transformed.”

Unlike prom, Post-Prom is free for students and serves a substance-free alternative to other after-parties. Throughout the year, the Post-Prom Committee raised money from community donations and received local support from restaurants to cover the costs of the event.

In 2021, COVID-19 safety concerns forced organizers to host an outdoor Post-Prom at Markoff’s Haunted Forest, where seniors navigated a haunted trail wearing masks. This year, however, the Committee aimed to return to the normalcy of previous events by planning an indoor event, Sullivan said.

“Some of these kids have been going to school together since kindergarten,” Sullivan said. “It’s probably the last time where they can all get together and hang out in a casual environment.”

As sophomores and juniors, the Class of 2022 didn’t attend traditional celebrations like homecoming, pep rallies and talent shows due to restrictions on large gatherings. After missing these experiences, many seniors — like Udler — were grateful for the chance to finally attend prom.

“Every high school experience is supposed to be cherished, but it’s hard when you don’t have those experiences,” Udler said. “Prom definitely gave us something to appreciate and look forward to.”