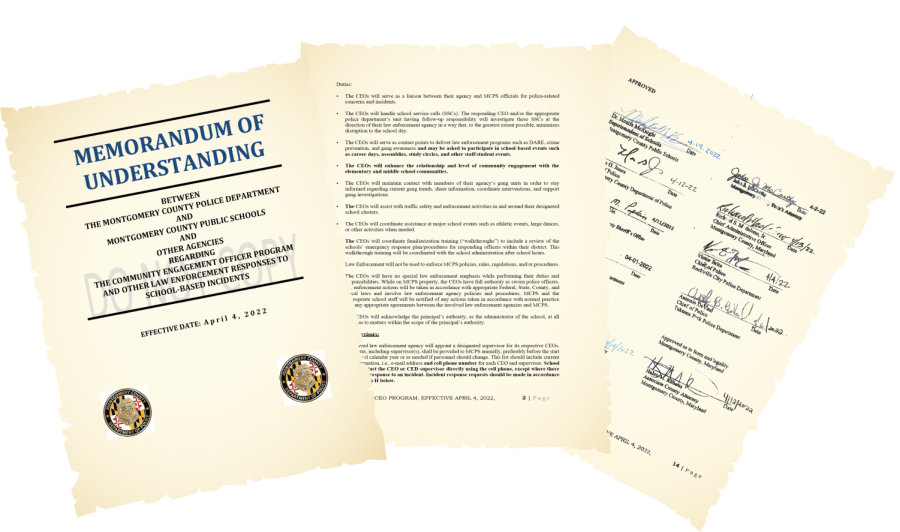 MCPS officials finalized a new Memorandum of Understanding (MOU) with the Montgomery County Police Department that outlines the role of police in the county’s schools. The updated agreement's provisions aim to improve school safety by strengthening communication between police and administrators.

MCPS officials finalized a new Memorandum of Understanding (MOU) with the Montgomery County Police Department on April 19 that outlines the role of police in the county’s schools, the school district wrote in a message to community members on Tuesday. The updated agreement’s provisions aim to improve school safety by strengthening communication between police and administrators in MCPS schools, according to the document.

Under the new “CEO 2.0” agreement, these officers will continue to serve as “uncontrolled units” that aren’t permanently stationed in school buildings. However, schools must provide officers with access to a designated work office space near each building’s main office. The updated MOU also permits CEOs to establish a direct line of communication with school administrators and defines an enhanced role for the officers at school based events. Previous guidelines prohibited direct communication between school officials and their cluster’s CEO.

However, school principals may not contact their assigned CEO to request a response to an in-school incident, and must instead call 911 or the police non-emergency number. The agreement requires school officials to contact law enforcement if one of the outlined “Critical Incidents” — such as robbery, gang violence or sexual assault — takes place on school grounds, and sets guidelines for staff to determine whether other incidents require a police response.

“The important social-emotional and mental health support that we are putting in place along with this new agreement with our police partners is the right solution at this time,” Interim Superintendent Dr. Monifa B. McKnight wrote in the community message. “We believe that these officers will be dependable and valuable members of our school communities.”

The school system’s decision to strengthen ties with local law enforcement follows a series of highly publicized security incidents in schools that have led some community members to call for stronger security measures across the district. A shooting at Magruder High School in January left one student in critical condition, while a stabbing at Montgomery Blair High School in November and an assault at Winston Churchill High School in October both resulted in student injuries.

While CEOs are still prohibited from enforcing the school district’s code of conduct and assisting administrators with student discipline, they are expected to attend regular meetings with staff members and security officers.

Officers will also continue to assist school security teams with traffic control, coordinate security at school events and serve as a liaison between the police department and MCPS, according to the MOU.

“I believe [CEOs’] mere presence and availability to students and staff will help immensely,” wrote MCPS Systemwide Safety and Emergency Management Supervisor Michael Harting in an email to The Black & White. “There are dozens of examples where CEOs (formerly SROs) have acted as mentors to troubled students over the years, students and staff have come to them and inform[ed them] of serious incidents that were about to happen”

The Montgomery County Council met on Tuesday to review the signed agreement. Council Members also looked over recommendations from advocacy groups like the Student Wellbeing Action Group (SWAG), which advocates for the district to adopt a restorative justice-based-approach on school security. The group of student advocates issued a set of final recommendations in July, warning that police presence near school buildings “would hinder our ability to move away from punitive punishment and subject students of color to the school to prison pipeline.”

Still, local police feel that a strong relationship between law enforcement, students and the district is a vital component of keeping schools safe, MCPD Captain Stacey Lynn said in an interview.

The agreement’s release on Tuesday follows months of private negotiations between the school district and the police department and has led some community members to express concerns over the transparency of the drafting process. In the email to families on Tuesday, MCPS officials wrote that the district gathered community input during a series of focus groups, youth-police dialogues and virtual programming that took place between December and March.

However, some students are worried that the agreement’s provisions will negatively affect school environments by leading to an increased police presence inside academic buildings.

“I feel like it may be too much, especially at Whitman, as there are already a lot of security guards keeping an eye on students at all times,” said sophomore Maria Samos Rivas. “I understand that for some schools it may be necessary, but I think that it’s honestly a little nerve-wracking to have [a police officer] in schools on a daily basis.”

In an email to families on April 7, MCPS wrote that officials would send a community message and hold a press briefing after it finalized the new CEO program at the end of spring break. The school district notified families that officials finalized the plan in an April 26 community update — one week after Superintendent Monifa McKnight signed it — according to the document.

Some students expressed frustration over the school district’s communication during the agreement’s final stages.

“I find it frustrating that [MCPS] did not let us know earlier,” an anonymous sophomore said. “I think [the MOU] greatly affects our learning and we should be aware of the role of police officers in MCPS.”