The Black and White • March 21, 2022 • https://theblackandwhite.net/71915/feature/a-cymbal-of-school-spirit-drumline-keeps-whitmans-heart-beating/ 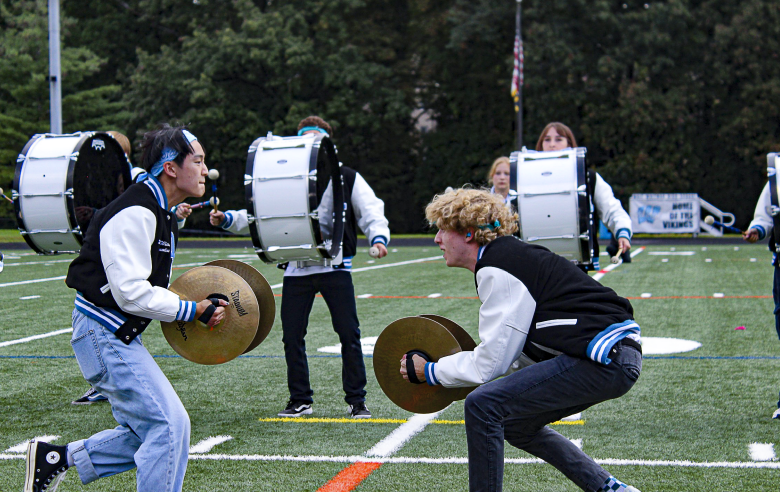 For years, Whitman’s drumline — a tight-knit group of 12 student musicians — has generated enthusiasm at football games, basketball games and even the spring talent show.

Amid crowded stands, students in black and blue letterman jackets bang on their drums, with the roar of the student section as their backdrop. The lively energy in the mass of students heightens. Soon enough, the sounds get louder — drums boom, cymbals crash, voices ring. Student excitement is palpable; win or lose, spirits are high.

Everyone knows what comes next.

For years, Whitman’s drumline has played an integral role in spreading school spirit. The tight-knit group of 12 student musicians performs to generate enthusiasm; they’re present at football games, basketball games and even the spring talent show.

Senior and co-captain of drumline, Phia Polley-Fisanich, joined the group after becoming instantly mesmerized by their act at her freshman orientation.

“I was so impressed and captivated by the performance that I decided at that moment that had to be me,” Polley-Fisanich said.

Drumline sounds off with cymbals and three different drums: bass, snare and quad drums. The bass drums, due to their size, require percussionists to play them vertically, held in place with a metal shoulder harness. The smaller and sharper snares strap around each drummer’s neck, and they’re hit from the top. The quads — made up of five connected drums — are played in the same fashion as the snare drums, but they’re wide enough to require a shoulder harness, too. Drumline at Whitman typically consists of four bass players, four snare players, two or three cymbal players and two quad players.

Polley-Fisanich plays a bass drum — an instrument she first began to practice while participating in the marching band during her freshman year.

“I chose the bass because I felt pretty intimidated by the snare and quads, and I knew I could pick bass up pretty quickly,” Polley-Fisanich said. “I fell in love with the nuances of the bass.”

Senior Edward Krauland, Polley-Fisanich’s fellow captain, joined drumline his junior year after failing to make the team his freshman and sophomore years. Following those unsuccessful attempts, Krauland wanted to prove himself to the team. In an effort to achieve his drumline dreams, Krauland worked to improve his technical skills while writing different “cadences” — the short sequences of music that drumline plays.

Krauland’s first exposure to drumline was the 2016 Whitman talent show. At the time, he was a percussionist in his previous school’s band but mainly played at home. After seeing the performance, he knew he had to join.

“I wasn’t motivated to become a better drummer until I saw drumline perform for the first time,” Krauland said. “A common thing that goes through drumline kids’ heads is that once you see them play, there’s a spark. You don’t even say, ‘I really want to do that.’ You’re like, ‘I have to do that.’”

After a percussionist’s initial request to join drumline, they must prove their skills to the captains. Tryouts consist of “call and response” drills — in which current members play a rhythm and hopeful members play it back — sight reading sheet music, answering questions that require thought and honesty — for instance, why the student wants to be on drumline or their thoughts on a specific part of a song — and freestyle dancing to a randomly chosen song while wearing their drums. The evening after the tryout,  captains announce the official lineup via Facebook.

“It’s tradition at tryouts to say, ‘Dance to this song right now — no context, just dance,’” Krauland said. “It’s really embarrassing for the kids, but it shows us that they’re not holding themselves back, and that they’re courageous.”

Drumline has been a celebrated part of the Whitman community since 2007. Over the years, it’s evolved from an intense band to a more freeform, relaxed and theatrical type of group, Polley-Fisanich said. Drumline’s first captain was Danny Ullmann (‘09), who founded the group by proposing the idea to former instrumental music department head Terry Alvey. The goal of drumline was to expand Whitman’s music programs and evoke spirit in the community, which, years later, it continues to uphold.

“Drumline has been around for a long time,” snare drummer Jack Mandell said. “I’ve seen YouTube videos of Whitman drumline from 13 or 14 years ago that are grainy and pretty cool — they practiced in the loading dock, the same place we practice today.”

The building services loading dock is positioned right next to the music room and provides drumline with their own space to practice, polish and experiment with their material.

A typical practice for the group includes warming up with stick control — short cadences that include rhythms which prepare percussionists’ hands to play — then fixing weak areas on old pieces or working through new pieces altogether. After warm-ups, the line often splits into sectionals, drumline’s different instrumental subsets, to learn or practice pieces. Near the end of a practice, the line reconvenes to play through their main set of cadences to be performed at upcoming events.

Cadences include “audibles,” which are the chants shouted throughout the set. At Whitman games, students often join in on the audibles, Polley-Fisanich said.

“When the crowd is really receptive to what we’re doing, it’s a very empowering experience,” Polley-Fisanich said. “You feel both supported by your community, and like you’re supporting your community by bringing the hype and trying to make the games more enjoyable.”

Musicians on the line write the cadences, which are kept in a binder passed down to every drumline generation. The big blue letters “DL” can be found on the cover of this sacred object, while the words “What you are about to read is the ancient scripture of Whitman drumline; be prepared” appear on the inside cover. Due to a recent scare with the binder, drumline now keeps all of their music in a digital folder on Google Drive too.

“During COVID, the folder went missing, and we had a freak-out, because we thought all of the music for drumline was permanently lost,” Mandell said. “Quads player Bradley Rich and I went looking around the band room and found the binder in a band closet that had papers and things everywhere. We texted a selfie with the binder to our drumline group chat, and everyone was ecstatic.”

Drumline’s main events consist of sports games like football, basketball and soccer, but the crew also play at pep rallies, poms competitions and the talent show.

“At certain events, like pep rally and talent show, Edward and I choreograph routines to incorporate into our musical performance,” Polley-Fisanich said. “We spend a couple weeks in advance rehearsing them over and over with the entire line, figuring out what works and incorporating new things. It’s a very collaborative process.”

As a club, drumline has a staff coordinator and sponsor, music teacher Brendan Kelley, but it’s largely student-led: Polley-Fisanich and Krauland do most of the heavy lifting. The two choreograph performances, run practices, choose which cadences the group will perform, manage tryouts and coordinate the events where they perform. Although Kelley supervises the practices and plays a role in communication between the line and administration, the majority of drumline’s administrative and creative components are in the captains’ hands.

“Phia and I really stepped up this year to bring drumline back to life,” Krauland said. “Once I got to this point, as captain, I established that I’m gonna enjoy it, but I’m also gonna put in the work so that drumline succeeds in the future.”

Although the captains often do the most organizational work, all drumline musicians share a similar passion for the team, Polley-Fisanich said.

“I get in the zone, and everything else goes away; it’s just me and the drum,” said senior snare drummer Adam Erdman. “At the same time though, I feel aware, and like I can notice all of the people around me. It feels surreal when I’m playing in the circle at the end of football games.”

Many special traditions bring the group closer, such as going out for food after games, wearing their unique letterman-jacket uniforms to school on performance days and taping their drumsticks with black and blue tape. Above all, the group is a family — the people that you meet on drumline are the kind of people that you would like to have around you for life, Polley-Fisanich said.

Drumline’s full game-day uniform includes a white t-shirt, black or blue jeans and the classic letterman jackets. Former captain Joe Wiedemann came up with the idea for jackets in 2014, and the tradition has stuck ever since.

“Joe is one of my biggest inspirations as a captain, because he had the most strict drumline,” Krauland said. “They were so good and sounded so clean, all in sync. His line all had the perfect ‘drumline face,’ a straight stare that set the intimidating tone as they played.”

After a year and a half in quarantine, there have been some setbacks for the crew. The return to Whitman’s stands has challenged the musicians to familiarize themselves with all of their original cadences again, learn new ones and teach the skills necessary to play them, Polley-Fisanich said. Right now, drumline is in a revival period, working to bring back school spirit for students as well as restore their own traditions and musical abilities.

Despite these obstacles, the bond between the members of drumline is stronger than ever. Above all, the team relishes the high of performing, and they’re motivated by their rich passion for music, Erdman said.

“It makes me smile thinking about being in the circle or the stands, when everyone’s jumping up and down,” Erdman said. “I love experiencing the energy of the crowd and how happy drumline makes people.”