The Black and White • March 17, 2022 • https://theblackandwhite.net/71884/sports/the-demartino-duos-rise-to-whitman-soccer-stardom/ 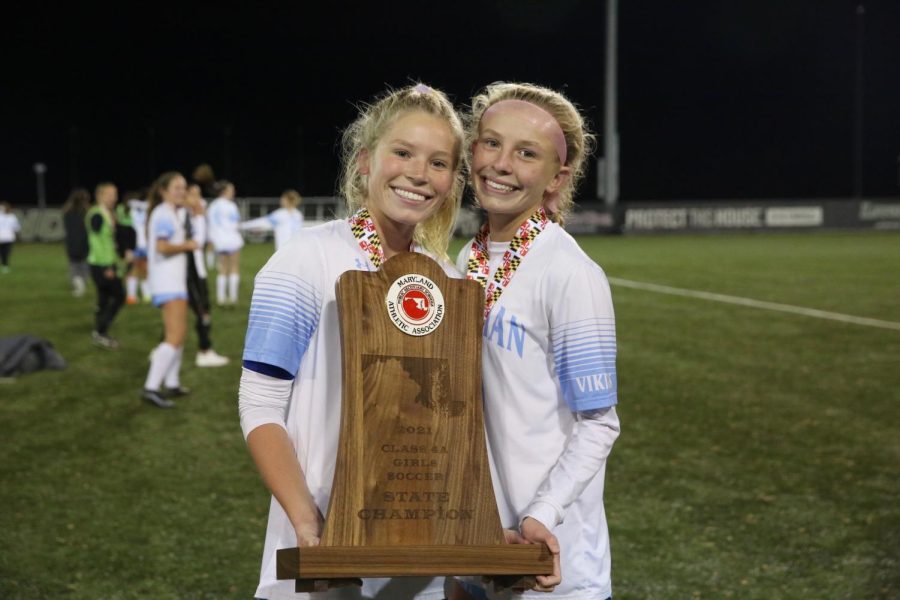 The DeMartino sisters emerged this year as a dynamic duo for Whitman’s girls soccer — a state champion team as of November.

Serena and Venus Williams, Peyton and Eli Manning, Steph and Seth Curry. Over the years, sibling duos in sports have entertained, displayed undeniable chemistry and won championships — both together and individually. Delaney and Riley DeMartino are no different.

The sisters, sophomore Riley and senior Delaney, emerged this year as a dynamic duo for Whitman’s girls soccer — a state champion team as of November. The two youngest siblings in a family of athletes, their dominance on the field came as no surprise to their father, Chris DeMartino.

“They gravitated to sports from a very young age,” he said.

Both girls began playing soccer in 2009 on recreational teams, when Delaney was five and Riley was three. While the two have followed in their parents’ footsteps by participating on lacrosse and swim teams throughout their childhood, as they approached high school they found themselves drawn to soccer in particular.

“I felt a connection to the game, and then I just kind of stuck with it,” Delaney said. Taken under the wing of the upperclassmen during her freshman year, Delaney has been a starting player on Whitman girls varsity soccer for the past four years and now holds a position as captain.

In December, the Washington Post named Delaney the 2021 All-Met girls soccer player of the year, following her dominating performances this season. Even with her accolades, Delaney is someone who leads by example with an attitude that pushes the team to improve, junior teammate Charlotte Shapiro said.

“She’s not necessarily the one that’s yelling at you or telling you where to go but she’s definitely always the hardest worker,” Shapiro said. “The way that she plays is definitely a gritty, intense style, so I think that in that way it kind of rubs off on the team.”

In her freshman year, Delaney scored a tone-setting 15 goals throughout the season, aiding the team on their journey to the state championships in 2018 — a journey that ended in heartbreak.

That season, the team competed in the Class 4A Maryland State Final, held at Loyola University Maryland. Whitman’s student section made the 50-mile trip to the Ridley Athletic Complex to support the team, where they joined a total of 1,500 cheering fans. It was a nail-biter. The girls kept the supporters on the edge of their seats, scoring two goals in a five-minute stretch during the second half to tie up the previously 2-0 game. However, with a final score of 4-2, the team fell to Perry Hall. The loss instilled a drive in the team for a comeback the next year, Delaney said.

For the DeMartinos, a family packed with Division I athletes, dominance on the field isn’t anything new. Both parents and their eldest son, Christopher (Good Counsel ‘17), played a varsity sport in college at the Division I level, and their second oldest, Tyler (Whitman ‘20) currently plays at the Division I level as well. The DeMartino parents both attended Loyola University Maryland, where their mother Erin was on the swim team and their father Chris started out playing both soccer and lacrosse before ultimately landing on baseball. Tyler, a three-year captain of the Whitman baseball team, earned a position on the 2019 First Team All-Met for baseball, a Washington Post award that recognizes the best high school athletes in the D.C. Metropolitan area. He went on to commit to the University of West Virginia for baseball but transferred to Xavier University during his freshman year. Chris believes that the sisters’ other brother, Christopher, who played soccer for the College of Charleston, was the main influence on his daughters’ love for soccer.

“My oldest son and I would always be out in the yard playing soccer,” he said. “The girls would always come up to be around the soccer ball.”

As Delaney got older, her eldest brother’s love for professional soccer translated into her own appreciation for the game. She became an avid fan of the English Premier League after constantly joining Christopher on the couch to watch Saturday morning matches.

“Delaney started falling in love with Liverpool and watching those games with him, so I think a lot of [her love for soccer] was from him,” Chris said.

Although they inspire each other, in a family like the DeMartinos, competition is inevitable.

“We’re very competitive with each other, which motivates us,” Delaney said. “Seeing my older brothers be successful in college kind of pushes me to be better and motivates me.”

This fierce attitude has translated into Delaney’s playing style. In a playoff match this year against Churchill, the team kept the intensity high even when the deficit was too large for Churchill to overcome.

“The game [was] winding down,” Chris said. “It [was] four to one. It’s pretty much finished and they just don’t stop. They never stop. They go to the bitter end of competition and they love it.”

For the family, soccer is more than just playing games. Chris has found that his childrens’ love for the sport has strengthened their father-daughter relationships, he said.

“Traveling different weekends with them individually gives you a very good opportunity to be in the car, on airplanes, hotels and spending three, four days straight, just the two of you,” he said. “[It’s] a great way to really talk and get to know them better.”

Delaney agrees that soccer’s dominant role in her life has brought her closer to her parents. As a member of the club team Pipeline ECNL, she practices three times a week in Baltimore and plays in two games each weekend — excluding out-of-town tournaments. While the hour-long drive to and from Baltimore five times a week can be time consuming, it’s generated more appreciation for her parents, Delaney said, and she credits them for her many achievements.

In Nov. 2020, Delaney committed to play soccer at Loyola University Maryland, achieving her lifelong aspiration to play in college.

“I love the game, and I want to play for as long as I can,” she said. “Being able to play Division I is a blessing, and I’m really excited.”

For Delaney, committing to Loyola was an obvious choice. Her decision was initially influenced by members of her club team: Two players from the class of 2021 had already committed to the college when Delaney began her recruitment process. Delaney and the two commits were noticeably cohesive on the field, Chris said.

The Loyola coaches began showing interest in Delaney the summer before her junior year, and she recalls naturally clicking with them, she said.

“[The coaches] had a plan for her, they were very committed to her,” Chris said. “When we went up to the school it was pretty much ‘This is where I want to go play.’”

Athleticism came naturally to the youngest sister, Riley, too. Despite trying other sports, she has never strayed from a devotion to soccer.

“They’re like a rat pack — you can’t break them up. They’re all together all the time, they’re very supportive of each other and it’s been an awesome season,” Chris said. “Riley absolutely loves it.”

On the Whitman team, Riley is known for her pre-game intensity. While the rest of the team forms a huddle, ready to cheer before a match, Riley gets into her “zone,” Shapiro said. As the team rushes onto the field with enthusiastic yells, Riley’s straight face remains unchanged — a stark contrast to her cheerful persona off the field.

Once on the turf, Riley’s concentration is exhibited through her skillful navigation of the field and innate chemistry with sister Delaney — Riley plays at right forward and Delaney at center forward.

“They’re more intense with each other because of the blood relationship,” Shapiro said. “You can’t really yell at someone else on the field like you could yell like your sister. They definitely yell at each other like they’re sisters.”

The sisters are just as supportive of their team as they are of each other. No matter who kicks the ball into the back of the net, the blonde braid of a DeMartino can be seen whipping through the air as they sprint towards the goal, eager to congratulate their teammate.

“Whenever someone scores, Delaney or Riley are always the first to hug them,” Shapiro said. “They’re always as excited for others’ successes as they are for their own success.”

With Delaney and other top seniors like co-captains Grace Li and Emma Giles graduating, the team is ready to regroup, she said.

With the DeMartinos in the offensive line and an equally strong force of players behind them, the varsity girls team were a force to be reckoned with in the 2021 state playoffs. The regular season ended with a record of 11–2–1, and the team then beat Churchill, Walter Johnson and Wootton, coming out as regional champions. Coming into the state playoffs, Whitman held the third seed ranking, but this didn’t stop them from going all the way — first demolishing Parkdale 13-0 in the state quarterfinals, then sealing their place in the state championship game with an 8-0 rout of Sherwood. Three years after Delaney and Whitman suffered a heartbreaking loss, the long-awaited redemption came Nov. 20, where the team beat Broadneck 2-1 on a field the DeMartinos know well: Loyola’s.

Call it a dynasty if you will, but one thing is certain: Riley and Delaney’s soccer careers have only just begun.