The Black and White • March 13, 2022 • https://theblackandwhite.net/71875/opinion/whitman-students-continue-demanding-action-on-gun-safety/ 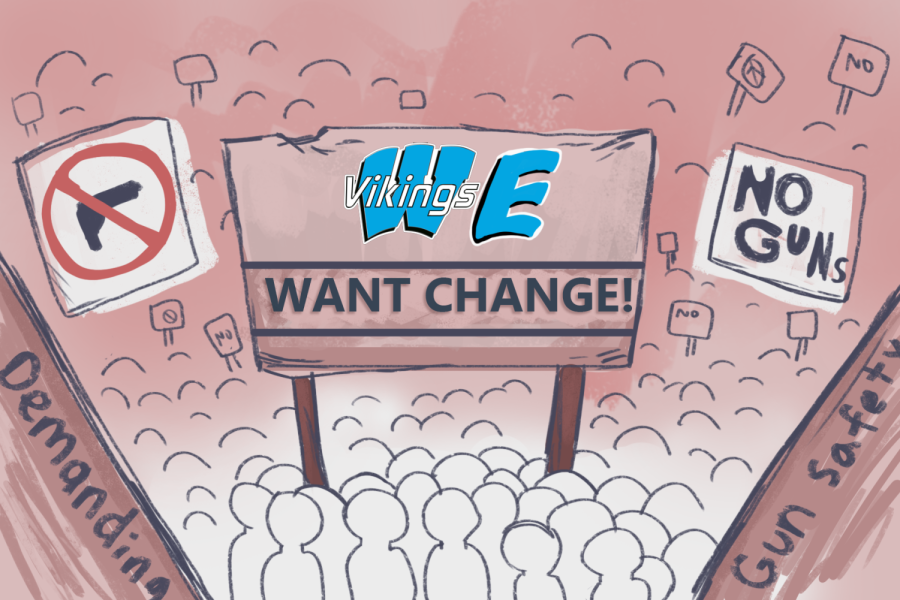 It's long past time for American lawmakers to implement common sense gun restrictions. Students can help make this happen.

Oxford High School sophomore Max Reed remembers November 30, 2021, as if it were yesterday. His morning began like it was any other weekday. He enjoyed breakfast with his friends in the school cafeteria — cracking jokes with them like usual — and went to his first four class periods.

Then, as he was heading to his fifth period class, he heard gunshots.

At 12:51 p.m., a classmate at Reed’s Michigan high school opened fire, killing four students and injuring eight others in the deadliest school shooting since Nikolas Cruz killed 18 at Marjory Stoneman Douglas High School in Florida in February 2018. This incident at Oxford High School was one of the 34 school shootings that took place across the United States in 2021, a dramatic uptick from the 10 school shootings in America during 2020.

And since 2022 has begun, school-based gun violence has hit close to home.

On January 21, a junior shot and injured a sophomore with a ghost gun at Magruder High School — a 20-minute drive from Whitman. Ghost guns are untraceable, deadly weapons that don’t require background checks to assemble. Despite their danger, possession of these weapons is legal (for now) in Maryland.

Whitman students need to continue advocating for stricter nationwide gun laws in addition to substantial mental health support in schools. Without a change, students and staff will continue to lose their lives within school walls.

Stricter gun laws would be a step toward reducing the number of deaths caused by firearms in America. In Japan, individuals must attend classes, pass exams and undergo extensive physiological assessments — as well as police background checks — before acquiring a gun. In 2019, the country had only 0.02 gun violence-related deaths per 100,000 people. In contrast, in the US, there were 3.96 gun violence-related deaths per that same population during that year.

Students need to demand that the US government implement measures similar to Japan’s. While young people don’t have the immediate ability to enforce universal background checks, pass red-flag laws or ban assault-style weapons, we can and should email our legislators, call their offices and take part in protests — and maybe even organize demonstrations. These steps may not seem impactful, but it’s our moral responsibility to do everything in our power to demand change.

Perhaps most importantly, we need to fight for stronger mental health support in our community, especially among adolescents. At least 59% of the 185 public mass shootings in the U.S. from 1900-2017 were carried out by individuals who had a diagnosed mental disorder or demonstrated signs of one prior to the incident, according to a study from the Los Angeles Times.

As students, we need to advocate for comprehensive mental health services. Whitman should offer a course on happiness, which could benefit students who struggle with mental health. Administrators should also provide a larger variety of after-school offerings so that students don’t have to immediately go home to potentially difficult situations. We can talk to administrators, testify before the Board of Education and reach out to our SMOB.

And students should recognize that small acts of kindness often go a long way to help peers who are struggling with mental health.

While gun rights supporters propose different solutions to make schools safer, they are far from feasible. Arming teachers, for example, can pose a risk to students on a daily basis. Realistically, teachers can’t transform into skilled law enforcement officers in the event of an emergency. Law enforcement officers participate in an average of 840 hours of basic training, including 168 hours of training on weapons, self-defense and the use of force. Educators don’t have this time.

Oxford High School reopened to students and staff on January 28, almost two months after the school closed following the shooting. Officials have taken measures to prevent another deadly incident, but Reed said these steps don’t erase the memories from November 30.

“We all have to bring clear backpacks, are subject to random bag searches and we present our school ID’s to gain entry to the building,” Reed said. “But it doesn’t stop the anxiety while sitting in my classroom, eating lunch or even walking to my next class.”

As our country’s next leaders, we need to make our voices heard to eliminate gun violence. Reed shouldn’t have to worry about his safety at school. Neither should we.