The Black and White • December 11, 2021 • https://theblackandwhite.net/71050/feature/wrapping-up-2021-spotify-wrapped-helps-students-connect-with-their-music-taste/ 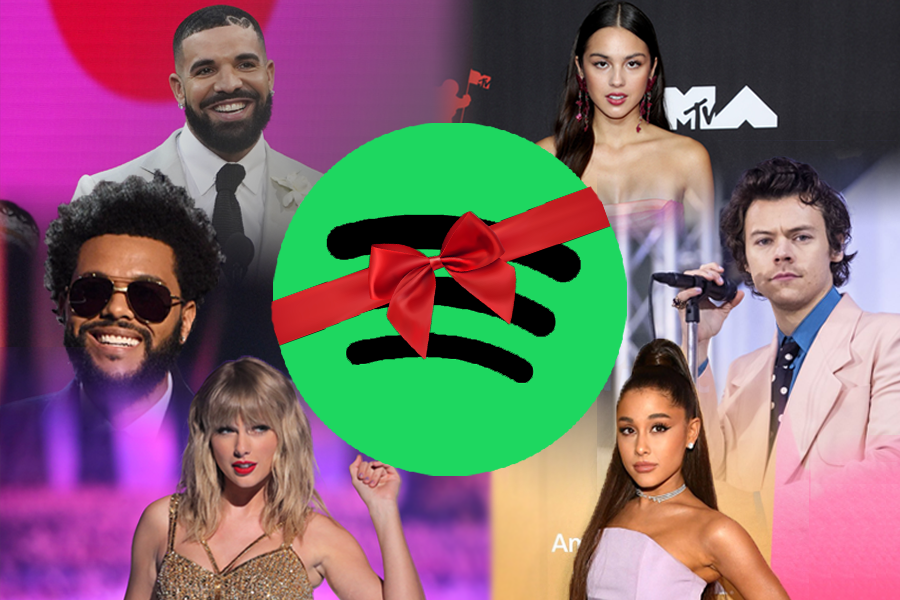 Spotify Wrapped came out on December 1 this year, and helped students and teachers alike recognize their connections to music.

By Kiara Pearce and Stephanie Solomon

On the first day of December, numerous Whitman students were filled with excitement. Not because soft flurries of snow might soon dust neighborhoods, or because winter break was just a few weeks away — but because December 1 marked the day when Spotify released the platform’s annual Spotify Wrapped, a personalized overview of each user’s listening habits from January 1 to October 31.

Wrapped presents each Spotify customer with an interactive slideshow that includes the artist who they listened to the most during the year, their top five most played music genres and other music-related data from the span of 303 days. The platform alters the slideshow’s display each year. The 2021 Wrapped, for example, included a section that showed listeners their “audio auras” based on their music taste.

“It’s a chance for me to see the progression of my music taste over the year, which is pretty cool,” Morris said.

Morris was in the top 2% of Drake’s listeners this year; but while his top artist was a rapper, the tune Morris listened to the most was an indie pop song — singer-songwriter Clairo’s “Pretty Girl.” Spotify Wrapped calculated that he listened to the song a total of 79 times.

“Sometimes I want to feel like a pretty girl too,” he said. “Nothing wrong with that.”

Morris played “Pretty Girl” 79 times this year, according to Wrapped, the same number of times junior Mia Barutta also listened to her top song, “Good Days” by SZA. Barutta was unsurprised to see that a pop tune took her number one slot, but she was shocked to learn that her top fifth music genre was Irish singing-songwriting. She soon realized the genre likely derived from her love of Hozier and Ed Sheeran, whose music, she admitted, she has a taste for.

“Getting this surprise genre helped me recognize that I have a broader music taste than I originally thought,” Barutta said.

Out of Barutta’s top five artists, Sheeran didn’t make the ranking, but Hozier was first on the list. Barutta was even among the musician’s top 0.05% of his listeners this year, she learned from Wrapped.

Like Barutta, senior Kip Wright’s Wrapped surprised him. His number one song was “The Heart of Life” by John Mayer, a soft-rock/pop tune that contrasted with the rest of his pop-punk music, he said.

“I don’t consider the songs in my top five to accurately represent who I am as a person,” Wright said. “Spotify only knows the amount of times I listen to a song, not how invested I am into a certain genre or style.”

Teachers enjoyed looking at their Spotify statistics in addition to students. Science teacher Peyton Ford’s number one artist was Calvin Harris followed by Doja Cat. Like Wright, Ford didn’t think that his Wrapped reflected his personality — though of course, he would never turn down the volume to Harris’ “Summer.”

“I just like the way that music sounds,” Ford said. “I can’t even tell you half the words to these songs.”

When looking past the data display’s colorful graphics and catchy wording, Barutta and sophomore Darby Infeld found that Spotify Wrapped encapsulated many of their peaks and low moments alike from the past year. Each song holds different memories, Barutta said.

“Music is such a key aspect of my life,” Barutta said. “There’s not a single moment I don’t have music playing. I look forward to my Spotify Wrapped every December to see what music helped me out through the year the most.”