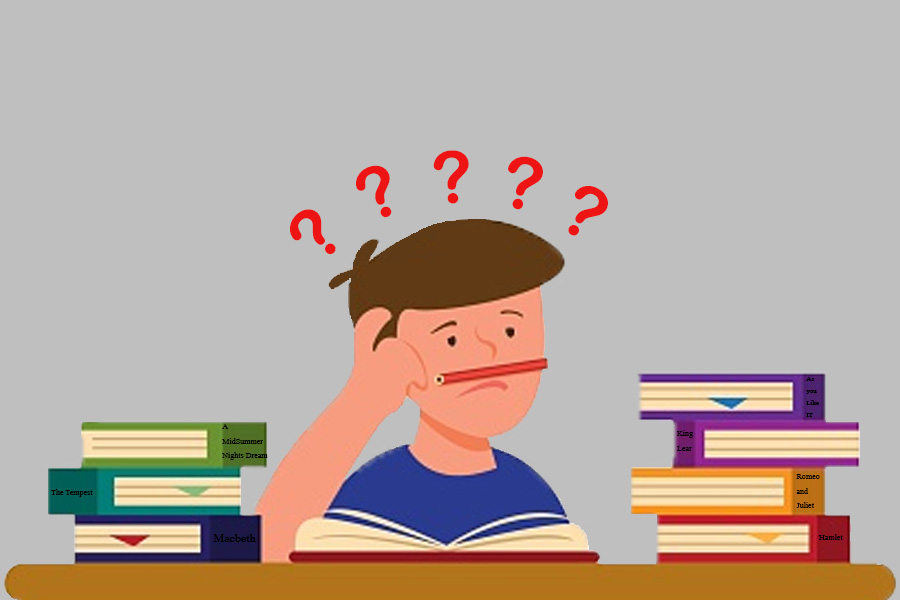 Year after year, I am not only left confused by Shakespeare's obscure words but am also left questioning why it’s vital for English classes to dedicate nearly a quarter of each academic year to analyzing his plays.

“O Romeo, Romeo, wherefore art thou Romeo?” my ninth grade English teacher recited, imitating a British accent as I made my way into class. I rolled my eyes, already dreading the next several weeks of my least favorite literature unit: studying the works of famed English playwright William Shakespeare.

Since sixth grade, I’ve given Shakespeare a tried and true effort. I’ve kept an open mind while reading his work, spent free time watching his plays on YouTube in an attempt to better grasp his plotlines, and given my all while delivering monologues in class. Yet, year after year, I am not only left confused by his obscure words but am also left questioning why it’s vital for English classes to dedicate nearly a quarter of each academic year to analyzing Shakespeare’s plays.

In MCPS, many middle school educators teach Shakespeare plays based on their discretion. When students start taking Honors English courses in high school, however, the curricula strictly mandate that students read Shakespeare through suggested core texts.

Despite Shakespeare’s significant presence in MCPS English syllabi, exploring the poet’s works year after year is an ineffective use of time. Focusing on one white, male author reduces students’ ability to gain insights from authors of different identities. Teachers should not instruct Shakespeare in MCPS schools and should instead replace his texts with works from a more diverse selection of authors.

Shakespeare wrote his plays in Elizabethan English, which uses different grammar and spelling than modern English language. In order to fully grasp Shakespeare’s words, students and teachers must dedicate a substantial amount of time and effort to deciphering his language and its context. There’s no reason teachers should waste valuable class time translating outdated dialects. Instead, it would be more worthwhile for students to read texts that allow them to spend more time gaining insights about the world.

“I really empathize with the students,” said ninth-grade English teacher Alisa Chin. “I like watching Shakespeare’s plays and experiencing them but I don’t necessarily like just sitting down and reading them.”

The sexist and racist undertones in Shakespeare’s plays are further proof that students would learn more from authors of diverse backgrounds than from a white man whose writing failed to uplift women or minorities.

Women in Shakespeare’s plays, for example, seem to exist solely to attract the male main characters with their beauty and passive natures. For example, in The Taming of the Shrew, men view the main character Katherine Minola — the “shrew” — undesirable because she’s intelligent and, yes, shrewd. The suitors instead covet Katherine’s sister, Bianca, who’s quiet and submissive, and whose appearance dazzles those around her. By the time the reader has closed the play, Katherine has forgone her autonomous ideals and married her intended love interest, Petruchio. Schools shouldn’t waste time on texts like these — texts that present women’s role in society as exclusively to please men, and that deem independent women undesirable.

Shakespeare also failed to properly depict minorities on stage. He cast white men dressed in blackface to play Black characters such as Othello in the titular play. Students should read literature from authors who aid in dismantling biases, rather than fueling intolerance.

While some argue that Shakespeare is the father of English literature, meaning that audiences would ideally acknowledge his literary contributions, many other authors from different cultures deserve just as much recognition as Shakespeare, if not more.

For example, Saadi Shirazi is a medieval Persian poet who Persian scholars widely recognize as one of the greatest writers ever. MCPS curricula, however, don’t acknowledge Shirazi at all. The author’s works, including the literature, “Bustan” and “Gulistan,” includes his views of human existence based on his experience as a Muslim. Examining Shirazi’s writing would help students examine the world from his eyes and better understand cultures they may be unfamiliar with, expanding pupils’ views of society and allowing them to become more tolerant of others’ differences.

Similarly, Isabel Wilkerson is a monumental figure in American literature, yet she’s nowhere to be found in MCPS curricula. For her book, “The Warmth of Other Suns,” she conducted over one thousand interviews to tell the stories of African Americans who participated in the Great Migration. Just as significantly, Wilkerson’s book “Caste” provides an in-depth analysis of the United States’ centuries-old racial hierarchy. Examining her work allows readers to gain a more substantial understanding of some of the injustices African Americans have faced. By reading Wilkerson’s books, MCPS students would be able to better understand struggles they may not have experienced themselves, hopefully causing them to become more empathetic.

Whitman administrators’ goal is to create an environment where students can learn unbiased concepts that encourage them to think more open-mindedly. Exposing students to texts that examine a variety of backgrounds, in contrast to Shakespeare’s literature, could help shape Whitman’s students into more tolerant individuals — something that’s much needed.

“Learning about other perspectives is important in order to unlearn biases,” junior Mitchell Hwang said. “It helps you view the world in other people’s eyes and allows you to receive information from more diverse sources.”

Examining literature holds an essential purpose: to encourage the growth of new ideas. To gain new insights, students need to read more works from diverse perspectives rather than spending years on one white male poet. It’s critical that the officials who design MCPS’ curriculums ask themselves if teaching Shakespeare helps students grow not just as scholars, but as people, too.