The Black and White • December 1, 2021 • https://theblackandwhite.net/70941/opinion/more-than-bearable-my-experience-backpacking-in-the-alaskan-wilderness/

More than “bear”able: my experience backpacking in the Alaskan wilderness 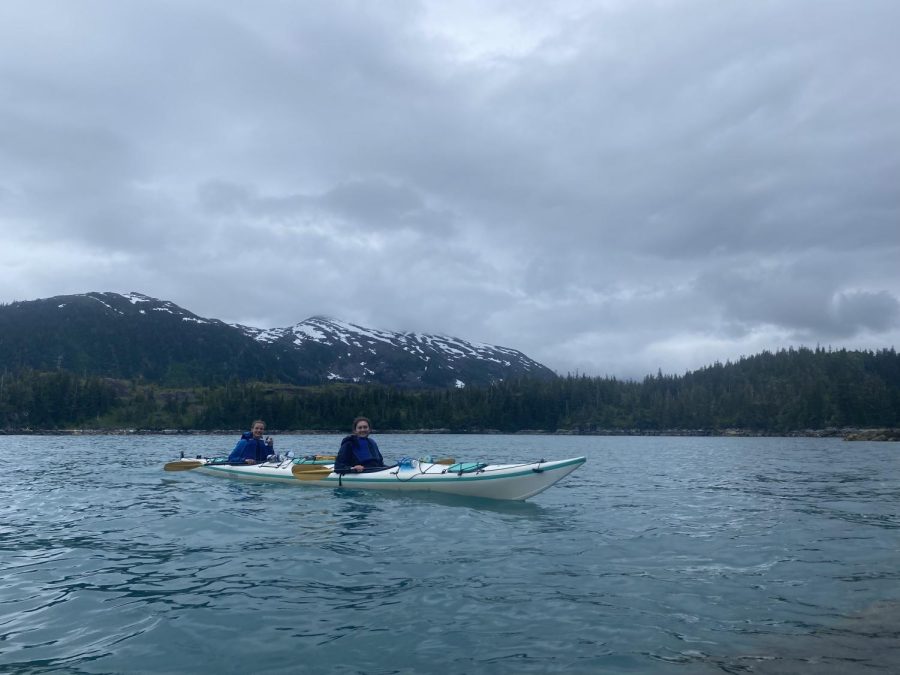 "The rules were simple: leave your phone at home; grab your backpack, hiking boots and three pairs of socks; and get ready to challenge your mind and body like never before."

Only a ripple of water trails behind the rutter of my 20-foot long sea kayak. My sunkissed knuckles clutch my paddle tightly, my hands blistered from the repetitive left-right motion needed to propel my boat across the sea. As I row, I listen to the soft crashes of the water against jagged mountain rocks, the calls of bald eagles swooping between trees and the coos of a family of sea otters sunbathing on a nearby island.

My kayaking journey had begun that morning at 5:00 a.m. For the first two hours of our day-long paddle, my 11 group mates and I rowed along the 18-mile mapped route in complete silence, taking in the sublime beauty of Prince William Sound, Alaska.

This past January, after spending months in quarantine glued to my computer, I decided I needed to remedy my pandemic-induced social isolation and dependence on the internet. I took the extreme route — I signed up to spend three weeks that summer participating in a backpacking trip through the Alaskan wilderness.

The rules were simple: leave your phone at home; grab your backpack, hiking boots and three pairs of socks; and get ready to challenge your mind and body like never before. After trading my bed, closet and pantry for a sleeping bag, three shirts and a daily tortilla smeared with peanut butter and jelly, I became more confident to take risks alongside new people, and more willing to disconnect from my devices and spend time in nature.

Before arriving in Alaska, my biggest concern was whether I would have anything in common with the other teenagers and two trip leaders signed up for the experience. However, almost as soon as I stepped off the plane, the hour-long drive to our first campsite in our 14-person white van put my fears to rest. I sat in my seat sandwiched between Sophia, an honest and witty bagel lover from Brooklyn, and Isabel, a gifted french braider from Chicago who had a knack for putting others’ anxieties at ease. Six girls and four boys from across the country and two trip leaders in their early 20s from Atlanta and St. Louis made up the group I would spend the next three weeks with. Despite coming from different backgrounds, we would come to develop an unbreakable bond, one which unexpectedly began with the song “Heat Waves” by Glass Animals.

We blasted this song during that initial van ride at full volume. Looking out the window at the snow-capped mountains and crystal blue sea that lay straight ahead, I knew I had found my place and my people.

The trip consisted of three backcountry camping expeditions — journeys that take hikers to remote areas rather than a campsite — in Chugach State Park, Prince William Sound and Denali National Park.

After arriving in Anchorage, we had one day to get to know each other and prepare for our first backcountry trip into the Chugach. During those 24 hours, we cooked spaghetti over a portable backpacking stove, played endless rounds of Prez and Spit and took a trip to Walmart to stock up on as many oatmeal packets and Honey Nut Cheerios as our trip leaders would let us.

Nerves were high the second morning while we divided up our bear cans and tents to load into our packs. These 45-pound packs were formidable, to say the least. The first time I put mine on and felt its weight, doubt and panic caused me to question whether I had the strength and endurance to hike 10 to 15 miles a day up a steep incline in the middle of nowhere. Yet, before I knew it, we arrived at the trailhead, used the privy for the last time, tightened our boots and began the trek.

As we hiked further away from civilization, morale in our group was high. The crisp air, the bright sunshine, a moderately flat trail and the rush of adrenaline gave us the boost of energy we needed to kick off our first backcountry.

It took four hours to reach an adequate spot to settle for the night. After setting up our tents, we split into our dinner and activity teams for the rest of the evening: cook crew, clean crew and special operations — “spec ops.”

Our division into teams went back to the trip’s overarching “group before self” mentality. I relied on every member of my group to get through each day. No one ate breakfast, lunch or dinner until everyone had their food, and we made it a tradition to always say “cheers” before we took our first bites. No one hiked ahead of others, no one got water for only themselves and no one went to the bathroom alone.

As much as I depended on my group to help me with physical challenges, I also leaned on them for emotional support. When my final dry pair of socks got wet on the second day of the backcountry, when I had 46 bug bites lined up on my feet and when my hands felt completely numb from repeatedly dunking them in a freezing glacier stream to obtain fresh water, my trip mates were always there for me, whether it was carrying some of the heavier group items to lighten my pack or telling random stories from home to make the time go by quicker.

As we trekked through the Alaskan wilderness, bear safety was a top priority for my group, especially since a bear shredded one of our tents on the second day. I now know how to use bear spray, make a “bear”itto — a bundle of backpacks secured with a tarp — and safely set up a “bear”muda triangle, in which we placed our tents, cooking materials and backpacks in a carefully calculated triangle, 200 feet away from each other. While hiking, we would always yell “hey bear” to alert them to our presence. The mountains were the bears’ home, just as they were for any other wildlife we might have come across, so we always acknowledged that the animals had more of a right to be there than we did.

Respecting the land also meant leaving no trace. I was the group’s designated apple core eater, meaning that whenever we ate apples, my group members passed their core to me and I would eat each one down to the seeds and stem. Living on protected land also meant leaving no human waste, so we used Waste Alleviation and Gelling (WAG) Bags for those three weeks. Let me tell you, carrying around your poop in a bag for five days changes a person.

Before I knew it, I was hiking out of the Chugach, tossing my WAG bag into a bear-safe trash can, and sprinting to get inside the warm comfort of the van. Our team then drove south, heading into Whittier, a sea town composed of fewer than 300 residents, listening to “Heat Waves” along the way.

The next backcountry looked quite different from the last one. I traded in my backpack for a kayak and spent four days paddling through beautiful waterways accompanied by jellyfish, sea otters, sea lions, whales, and, of course, WAG bags. There I met Victor, our kayaking guide and the coolest person I have ever met. Victor centered his life around respecting and exploring the wilderness. At night, my group and I would sit in a circle on the pebble beach of the tiny island we camped on, and Victor would show us a map of Prince William Sound as we discussed what our routes for the next day would look like. Those moments made me realize just how fulfilling connecting with nature can be.

Those five days in the Sound flew by, and when we pulled our kayaks up onto shore for the last time, it was bittersweet to leave the water behind. Glass Animals serenaded my friends and me through our van’s sound system as we embarked on our six-hour drive to our last destination: Denali National Park, home of the highest peak in North America.

Everything we had accomplished before was nothing compared to what faced us now: a 38-mile hike along the extremely steep and rocky Kesugi Ridge.

Over the next six days, that ridge demanded more from me than anything ever had before. My legs had never felt more tired, my lungs had never burned more and my hips had never been more bruised from the weight of my heavy pack. Even so, those six days were the most remarkable ones of my life. Whenever I felt like I would roll down the side of a mountain if I took one more step, David — one of my leaders — would say, “Hey Lauren, remember that time you hiked the Kesugi Ridge at 15 years old,” looking ahead to the future to remind me of what I would achieve. Every night, I slithered into my sleeping bag feeling like I had accomplished something impossible, and that made all my challenges worth it.

The night we finished the trek my group and I sat in our final “dessircle” — dessert circle — and munched on Oreos as we shared our ultimate “highs and lows” from the trip. Sitting at an old campsite picnic table, I realized that even though I’d soon be thousands of miles away from some of my new friends, the bond we had formed amid the demanding efforts of these three weeks would never break.

Five hours later, we sat in the departure lane at the Anchorage airport at 2:00 a.m. in broad daylight and listened to “Heat Waves” together for the last time. Those three minutes and 58 seconds were the last time all 12 of us would ever be together at once. I missed my summer adventure already, but I felt incredibly grateful for the new people in my life, for the memories we had made and for my newfound passion for backpacking.

It wasn’t until I came home and ate a burrito outside in the dark that it truly hit me: Alaska was now in my past.

However, I turned some of what I learned over the summer into practice, especially since I was happier and less stressed than before the trip. I deleted TikTok, and I’ve made an active effort to avoid Instagram and Snapchat when the use of the apps has felt unnecessary. I’ve also tried to hit local trails at least once a week. While Maryland trails aren’t quite as breath-taking as the Alaskan wilderness, spending time outdoors and disconnecting from people and obligations still feels incredible. Each time I step foot on a path, I hit play on “Heat Waves,” look up from my phone, take a deep breath and focus on only the nature around me.

I will never forget those “late nights in the middle of June” because “sometimes all I think about is you,” Alaska.