The Black and White • November 29, 2021 • https://theblackandwhite.net/70905/feature/bee-hind-the-scenes-whitman-drama-produces-the-25th-annual-putnam-county-spelling-bee/ 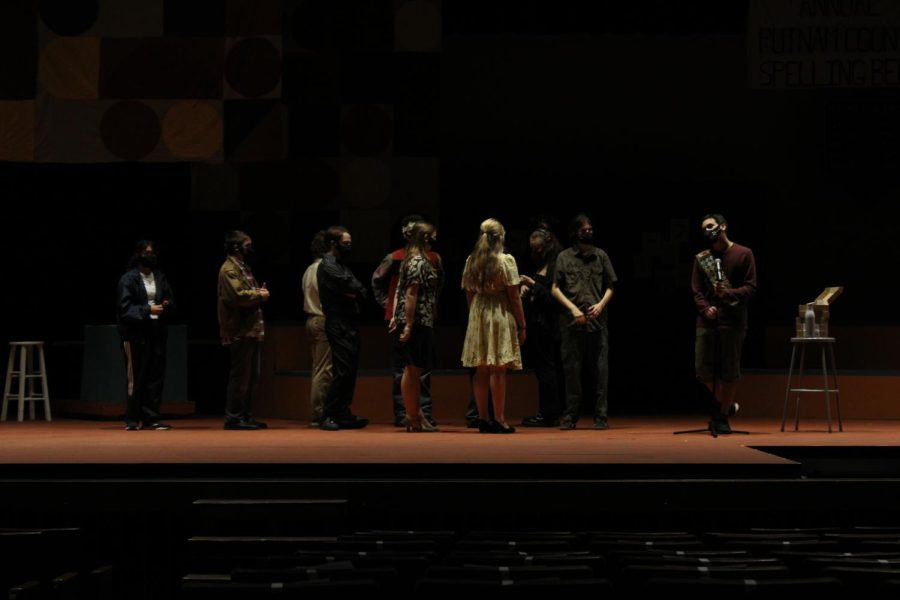 Members of Whitman Drama test their microphones on stage before opening night.

Two hours before the navy velvet curtains rose, members of Whitman Drama stood in a circle in the auditorium entrance, hands interlocked. Eyes closed, the actors, directors and technology crew members reflected among each other — a recurring tradition before a show.

This year’s fall musical, The 25th Annual Putnam County Spelling Bee, told the stories of six students participating in a modern-day middle school spelling bee. The play highlighted the characters’ quirky personalities and heart-wrenching backstories, and even included audience participation. The show took place on November 18-20 and was Whitman Drama’s first in-person performance since “Peter and the Starcatcher” in February of 2020.

Director Ian Anthony Coleman, who is in his third year working with Whitman Drama, chose the musical comedy for its lighthearted nature, he said.

“I really wanted to do something that was fun and that people could laugh at,” he said. “The past 20 months have been miserable. I wanted to come back to the theater and spread joy, and I think that that’s exactly what we’re doing.”

Months of student-driven efforts went into the production, as is typical for Whitman Drama. After student leaders held auditions in September, actors practiced every Wednesday and Friday afternoon with assistance from the technology crew, while orchestra members rehearsed every Tuesday and Thursday afternoon in preparation for their live performances in the pit. Occasional Saturday rehearsals spanned from 10 a.m. to 8 p.m.

Before the cast and crew deemed the show to be audience-ready, students participated in “hell week” — the infamous annual two-week period leading up to opening night, when rehearsals begin right after school and continue until 8:30 at night. Similar to previous years, rehearsals consisted of non-stop scene run-throughs in order to sear lines, mannerisms and musical numbers into the actors’ brains, said sophomore Will Young, who played one of the lead characters, Leaf Coneybear.

“It’s definitely hell, but I don’t really think about anything else while we’re rehearsing,” Young said. “It’s worth it.”

On November 18 — after two weeks of continuous rehearsal — members of Whitman Drama arrived at the auditorium three hours before the opening night call-time of 7 p.m. Whitman Drama members rushed back and forth between the costume room, green room and stage, making sure that final lines were memorized and props were in place before the curtain rose.

As the sound team finished attaching microphones to costumes, actors stood in line on stage, gazing out at the empty rows of seats. One by one, each student sang a few lines, ensuring that during the performance, spectators from the last row of auditorium seats could hear them.

In a secluded corner backstage, the static of students’ microphones buzzed from the props table. Nearby, white button-up shirts, pantsuits and argyle sweaters hung from racks in perfect lines.

Costume Director Sophie Hoffman, a senior, deliberately selected outfits to match each character’s distinct personality, she said. Hoffman and the costume team created the Putnam wardrobe by using items of clothing from past shows’ inventories, along with ordering specific garments and fabrics online. The team searched shopping sites for pieces with an early 2000s academic theme, Hoffman said.

“I really try to focus on each character’s story and personality and how to convey those through the clothes they wear,” Hoffman said. “Costumes help tell the story that isn’t explicitly told onstage and really highlight different aspects of the characters.”

Hoffman also guided her team in preparing to manage performers’ quick-changes between scenes. Each year, while the audience focuses on the stage during the performance, actors frantically switch into their next costume backstage — costumes which crew members have proactively hung up.

“Everyone is running around putting on their costumes and doing makeup,” Hoffman said. “It’s kind of like organized chaos.”

Shortly after 7 p.m., Whitman students, parents and teachers filled the auditorium, buzzing with energy. As the last stragglers settled into their seats, the overhead lights slowly dimmed and the audience heard a faint melody rising from the orchestra pit.

As the spotlight beamed down on junior Joseph Akinyoyenu, a wave of confidence enveloped him. Akinyoyenu snapped into character as Mitch Mahoney, finding as the show went on that laughs and reactions of the crowd made performing easier, he said.

“Every part of the production is important,” Akinyoyenu said. “You need the lights. You need the music. You need the costumes, the stage, and everything comes together. You can’t do it without any one of them.”