The Black and White • November 7, 2021 • https://theblackandwhite.net/70713/news/safety-concerns-force-closure-of-turf-field/ 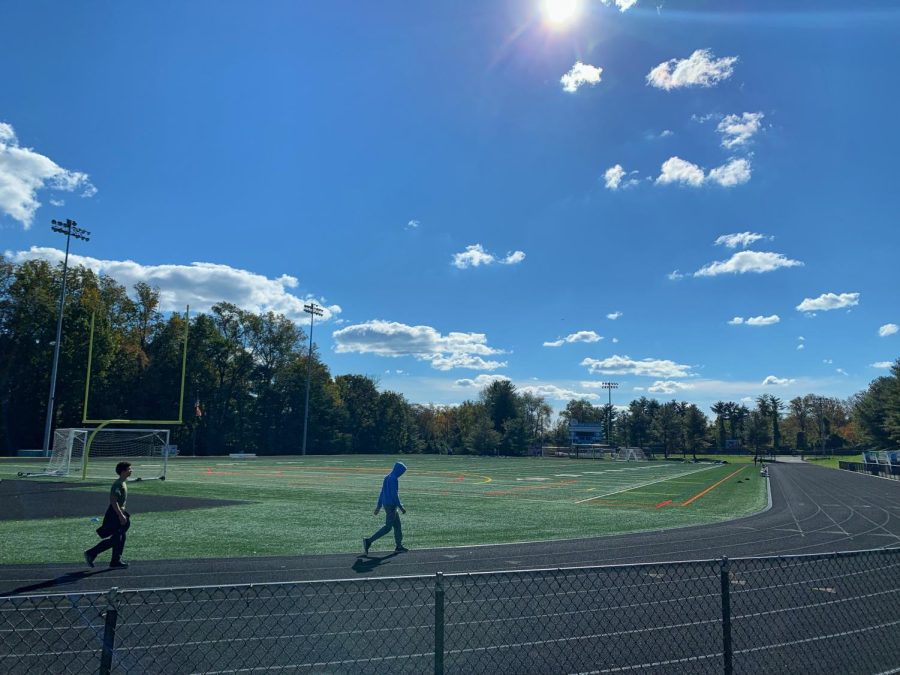 Whitman’s artificial turf field has closed for the remainder of the fall sports season. Before the field's installation in 2018, many community members expressed concern over the field’s proposed infill material, Zeofill.

Whitman’s artificial turf field has closed for the remainder of the fall athletics season as a precautionary safety measure, Principal Robert Dodd wrote in an email to community members on Thursday.

Both Whitman athletics teams and outside sports organizations use the field, which had undergone repairs by MCPS specialists in October. Administrators are collaborating with school system officials to further evaluate the turf’s condition to identify any additional necessary repairs, Dodd wrote in his message.

Student athletes told The Black & White that the field’s turf was particularly slippery, and that players’ use of the turf stirred up dust particles during practices and games this season. The playing conditions may have led to an injury on the girls soccer team and frequent falls during field hockey games in recent months, according to players.

Both teams’ playoff games were previously scheduled to take place at Whitman on Friday night, but the field’s closure forced the teams to play at Walter Johnson High School.

“This is a popular field receiving a lot of use and after evaluation, ‘in an abundance of caution,’ the field needs maintenance,” MCPS Communications Director Chris Cram wrote in an email to The Black & White. “You can’t use a field while it is being re-conditioned.”

Girls soccer goalkeeper Abby Fletcher fractured her arm during a game on October 27 after she slipped and fell backwards on the field. Stumbles are frequent among athletes during games and practices, she said.

“I think my injury was a direct result of the field being bad,” Fletcher said. “The field has been really horrible all season, and it’s been more difficult to win. I expected them to close it.”

The field’s slipperiness has also limited athletes’ performance during games — making it difficult to execute particular maneuvers, they said, while placing Whitman’s opponents at a competitive disadvantage.

“For the teams we played, the slippery turf came as a shock and it took some time for them to adjust,” said field hockey player Ellen Ford, a junior. “Everyone had to be more cautious when playing and make sure not to change direction too quickly.”

The field’s closure comes just three years after MCPS and the nonprofit Montgomery Soccer Inc. jointly financed a $1.3 million project to replace the school’s previous grass field with the artificial playing surface. At the time, many community members were concerned with the lack of long-term data on the safety and durability of the field’s proposed infill material, Zeofill. The infill is mineral-based, and mostly contains clinoptiloite zeolite.

Even before the installation of Whitman’s current turf, artificial fields at other MCPS high schools were the subject of safety debates among community members. Three fields that the artificial turf company FieldTurf sold and installed failed to meet school district or industry safety requirements, and Montgomery Parks prematurely replaced Montgomery Blair High School’s field in 2016. Two years later, in 2018, the agency joined a federal class-action lawsuit accusing FieldTurf of knowingly selling unsafe and “defective” fields — including the field at Blair.

Findings from tests that MCPS independently conducted on Whitman’s newly installed field in 2019 indicated that the field didn’t meet industry friction standards — that it was “too smooth.” Concerns were not substantial enough at the time to warrant repairs or replacement, MCPS maintained.

Since the opening of Whitman’s field, Keystone Sports Construction has conducted monthly maintenance checks of the turf and released the findings publicly. The company had reported no serious concerns with the turf until this October. As recently as September, a Keystone technician reported that the field showed “no signs of excess wear, damage or fiber loss”; then, on October 19, the company documented that it made 27 repairs to the playing surface. The Keystone technician wrote that some inlays were “not being properly secured…particularly around the goal areas.”

While the field’s closure won’t last past the end of the fall sports season as of now, many Whitman athletes are skeptical that it would be safe to return to the field in the near future.

“I’m not sure if I can see us playing on the field in the coming months,” Fletcher said. “I really just hope it gets replaced.”