The Black and White • October 21, 2021 • https://theblackandwhite.net/70564/feature/six-new-teachers-embark-on-their-whitman-journeys/ 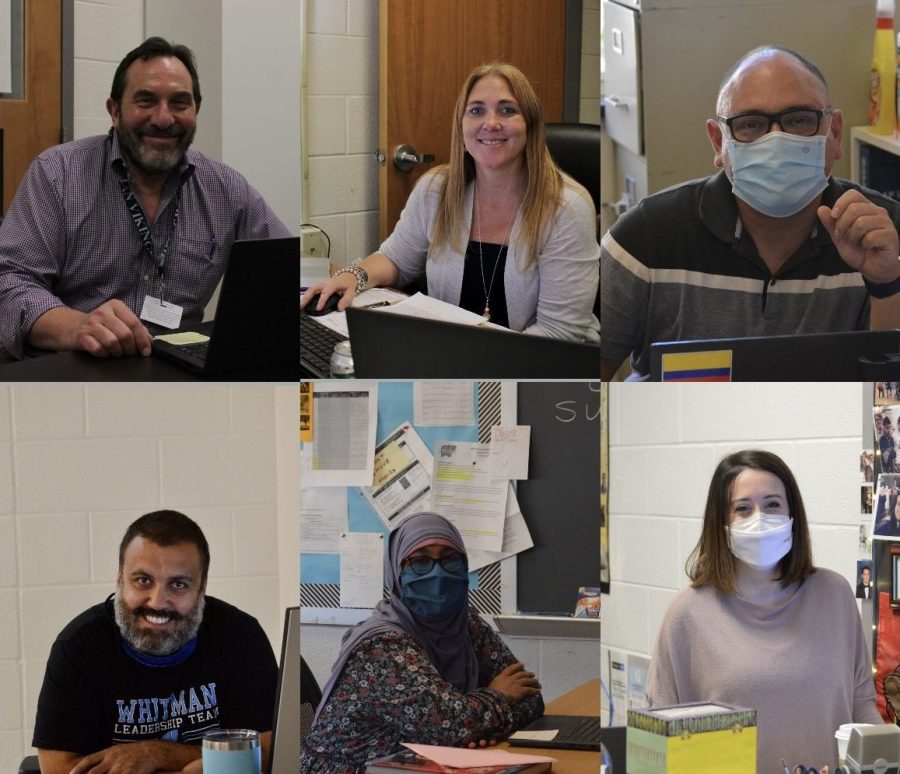 As Whitman welcomes back students and staff after a year and a half of online learning, six new teachers are adjusting not only to a post-virtual education era but also to their positions at Whitman.

Doug Prouty grew up in the Bethesda community and attended Walter Johnson High School. After studying English at Dartmouth College, Prouty taught for Princeton Review, running the company’s SAT practice courses in Washington D.C. and Baltimore for four years. Prouty trained teachers in administering tutoring sessions, test preparation classes and college admission services. However, he soon realized that his true calling was working with students in a public school system.

Prouty attained his master’s degree in English in 1988 and a second Bachelor of Arts in secondary education in 1995, both from the University of Maryland. He joined MCPS’ teaching ranks in 1995 at Seneca Valley High School and taught at the school until 1999, going on to educate at Walter Johnson High School for the next four years. Prouty took a break from the classroom in 2003 to serve as the Vice President and later the President of the Montgomery County Education Association — the county teachers union — for 12 years. In 2018, Prouty was later elected as the Vice President of the Maryland State Education Association, a position he held until earlier this year.

During his first year at Whitman, Prouty is teaching Honors English 9 and Honors English 11. Prouty is appreciative that he gets to start his next chapter in education with students again, he said.

“I love reading; I like talking about books and I like writing a lot,” Prouty said. “I like helping other people learn how to think and write. I think that if you learn how to analyze texts and create a valid argument about the text you’re reading, it transfers to anything else you want to do.”

Prouty’s favorite parts of teaching are getting to know his students and helping them become better writers, thinkers and human beings. Prouty is excited to teach in person this year because the face-to-face environment allows him to develop stronger relationships with his pupils, he said.

“To me, teaching is a personal experience and a face-to-face experience,” he said. “It’s fun being in a community and feeling like you’re part of it as the staff, and also part of it with the students.”

Becca Thompson received her Bachelor of Science in Math and her minor in Education from Saint Vincent College in Pennsylvania. This is Thompson’s 11th year as an educator; she taught at Winston Churchill High School for ten years from 2000–2008 and returned to the school to teach from 2019 until this past June. At Whitman, Thompson is teaching AP Statistics and precalculus.

Thompson pursued her passion for education from an early age. When she was in high school, she volunteered at her local middle school by assisting a teacher in his classroom. She has always enjoyed lending a hand to others, she said.

“I just like working with kids, helping them and trying to get the message across to them in different ways,” Thompson said. “When you’re going over what is normally a difficult topic, and your students have that ‘aha’ moment where they get it, or they’re not getting something so you try to come up with another way of explaining it to them and then they get it, it’s fulfilling.”

As a high school student, Michael Schweizer looked up to his teachers and coaches. Spending time around them helped Schweizer realize that, like his role models, he cherished the opportunity to connect with all types of people. He never thought of himself as an ‘office person,’ he said. Schweizer knew he wanted a career that made him feel active, full of energy and — most critically — where he could work with kids, which led him to teaching.

Schweizer attended the University of Maryland, where he earned his teaching degree in K-8 education. After teaching for five years in MCPS at Greencastle Elementary School and Argyle Middle School, Schweizer went back to UMD to receive his master’s in Math Education, which prepared him to teach high school students. He took his first secondary school job as a science teacher at James Hubert Blake High School in 2010 and switched locations in the county to teach at Quince Orchard High School from 2017–2021.

Now in his 17th year of educating students, Schweizer is teaching Honors Biology and serves as the science resource teacher at Whitman. Schweizer has always enjoyed the hands-on nature of science and the fact that the subject pertains to current events, he said.

Spending time around adolescents makes Schweizer feel like his days are never the same. For him, that’s ideal, he said.

Schweizer is now working toward an administrative leadership certificate through a joint program with MCPS and McDaniel College. Schweizer is studying to pass an administration test, which will allow him to apply for school-based leadership opportunities, including the roles of supervisor, assistant principal or principal. Schweizer embarked on this additional educational journey to learn more about the decision-making process and hierarchical structure in MCPS, he said.

Schweizer’s new students at Whitman have a work ethic and passion that is tough to find anywhere else, and that’s invigorating to be a part of, he said.

“When I saw the opening here, I knew that Whitman has a stellar academic reputation,” Schweizer said. “I thought it would be a good fit as a place where I can help Whitman grow, and Whitman can help me grow as a leader.”

While working toward his undergraduate degree at Georgetown University, Richard Obando participated in outreach and tutoring programs in which volunteers formed partnerships with particular public schools in the District. After gaining education experience, Obando realized there was a need for strong teachers in the community, he said.

Obando went on to serve as a teaching assistant for a group of recently immigrated students at Rockville High School, after which he knew with certainty that he wanted to pursue teaching as a lifelong career. After graduating from Georgetown, he obtained a master’s in education from the University of Maryland.

Obando has worked in the MCPS system for 25 years. He began working as a paraeducator at Rockville High School and the Mark Twain School before coming to the Randolph Academy and assuming his role as a teacher; 12 years later, he joined the ranks of Watkins Mill High School’s educational staff and taught there for eight years.

At Whitman, Obando teaches AP US History and AP United States Government and Politics. Since he was a four-year-old, history and maps fascinated Obando. His parents helped to foster his love of learning about global societies, he said.

“I enjoy working with adolescents and the social mission to the occupation,” Obando said. “There’s a meaning and purpose to teaching. You are contributing to the growth and knowledge base of a young person, and I think that’s extremely admirable.”

The school’s OneWhitman and Leadership Academy for Social Justice (LASJ) programs attracted Obando to Whitman. He’s eager to contribute to Whitman’s initiatives to end racial bias and hatred by helping OneWhitman and LASJ grow, he said.

Obando looks forward to the lively and interactive elements of in-person school that he missed at Watkins Mill last year while classes were online.

“There’s no question that in-person live teaching is a far better experience for students, but for teachers as well,” he said. “There’s just something dynamic about interacting and communicating with your students in a row.”

A passion for education is in Hala Abdou’s blood, she said. Her mother and one of her older sisters pursued teaching careers, which is why she felt that becoming an educator made sense for her.

Abdou was born and raised in Egypt, where she earned her bachelor’s degree in agriculture and then taught agriculture science for three years. After moving to the U.S. in 1998, Abdou worked in a Montessori school from 2004–2010 and took part-time teacher training in Waldorf education from 2012–2015. Abdou went on to earn her master’s degree in foreign language from George Washington University, then teaching five levels of Arabic to middle and high school students at Hayfield Secondary School in Fairfax County.

“I’m a lifelong learner,” she said. “I love to learn and add to myself.”

Abdou currently teaches all of the three levels of Arabic that Whitman offers. Abdou appreciates the warm environment she has experienced at Whitman, she said.

“There is an atmosphere of family and unity you can sense in the community,” Abdou said. “I like being a listener for students. Sometimes at the end of the day students will stop by and tell stories or just chat, and I love that. I welcome that.”

Courtney Chick always knew she wanted to be a teacher. As a student at Colonel Zadok Magruder High School from 2004–2007, Chick received guidance from Whitman’s current ceramics teacher, Kathleen Mulholland.

“She was so phenomenal and really helped me through school, so I was like, ‘that’s what I want to do with my life,’” Chick said. “‘I want to be an art teacher and provide that kind of relationship for students.’”

Chick earned her undergraduate degree from the studio art program at the University of Maryland in 2011, continuing at the school to attain her master’s in education. Before coming to Whitman, Chick taught art for nine years at Magruder High School, where she started the art history program. She currently teaches AP Art History and photography.

“The photo family is such an exciting thing to be part of,” she said. “The fact that both the school and the community are so invested in the arts is really special.”

The standout national reputation that Whitman’s fine arts program has earned was one of the factors that drew Chick to the school, she said.

“The fact that you have teachers who are so dedicated to their program is both refreshing and rewarding,” she said. “It is an environment that I want to be a part of.”

Chick has always loved taking art history classes and learning the background behind the artists she studied. More than that, Chick has always gravitated toward children; she’s glad her first taste of Whitman is in person so she can foster deeper connections with her pupils, she said.

“I really like building relationships with those that are younger than me and seeing the growth,” she said. “I’ve had students who I taught nine years ago that I still keep in contact with. It’s fun to see students progress as freshmen to seniors and then on after that. Getting to know them personally and creating that bond is what I love most.”