The Black and White • October 13, 2021 • https://theblackandwhite.net/70416/sports/whitman-girls-volleyball-breaks-their-losing-streak-on-dig-pink-night/ 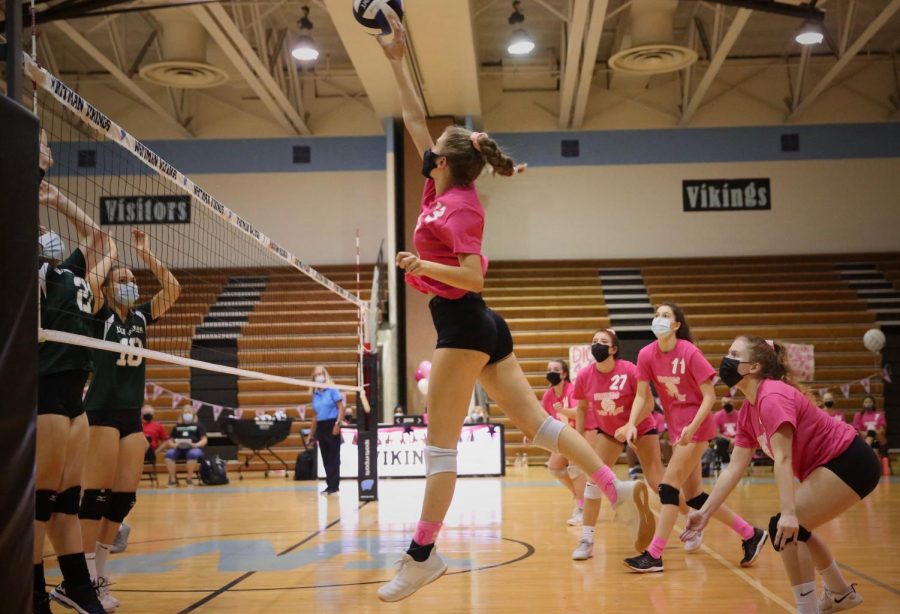 The girls volleyball team (4–5) prevailed against Walter Johnson (2–4*) in a tough, up-and-down battle.

The Vikes started off strong, staying in control during the first set and going up 8–1, and later winning the set 25–18.

The Vikes then entered a grueling battle with the Wildcats in the second set. Despite a fast start from WJ, the Vikes were able to hold off the Wildcats, winning the set 28–26.

Whitman kept their energy high but slipped in the third set to give WJ a 25–17 set win.

Now into extra sets, WJ had all the momentum. They got on a roll, winning 12 points in a row and eventually winning the set 25–10, with the help of some errors from the Vikes.

With two sets apiece, the teams headed into the final set, which is played to 15 points. Whitman used the help of a full crowd draped in pink to overwhelm the Wildcats and gain victory in the 5th set 15–10, winning the game. With this win, the Vikes broke a five-game losing streak.

“It was a tough one. We started off strong and then we slipped a little bit in the 3rd and 4th set, but we brought it back,” setter Saskia Gonzalez said.  “We’re definitely a team that knows how to fight, and it was great to get out of our losing slump.”

The Vikes will carry this momentum into their next game on Wednesday at Quince Orchard (7–1) at 6:30 p.m.