The Black and White • October 7, 2021 • https://theblackandwhite.net/70378/sports/three-keys-to-a-wft-victory-over-the-saints-on-sunday/

Three keys to a WFT victory over the Saints on Sunday 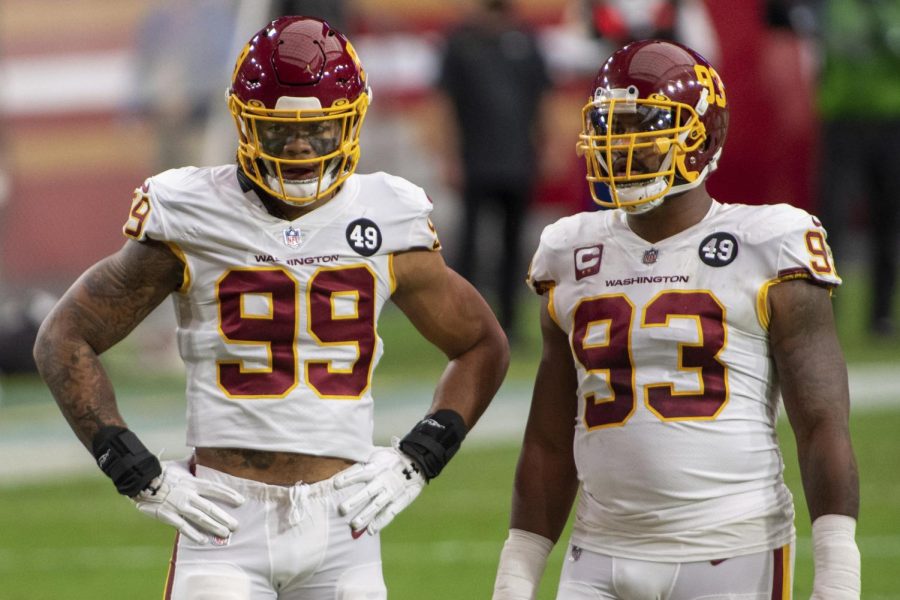 The Washington Football Team will look to carry their positive momentum into Week 5 against the Saints (Photo credit: Jennifer Stewart/Associated Press)

After a gutsy victory to get back to .500 last Sunday in Atlanta, the Washington Football Team will look to win back-to-back games for the first time this season at home against the Saints. To say the Saints have had a rollercoaster start to their season would be a massive understatement. They obliterated the Packers in Week 1, then turned around and got dismantled by the Panthers in Week 2. In Week 3, they dominated the Patriots, only to lose in overtime to the previously winless Giants in Week 4. The Saints present Washington with a great challenge, but it’ll be conquerable if the WFT can focus on a few crucial aspects.

Here are three keys for Washington to hand the Saints their second consecutive defeat:

Over the course of his career, Jameis Winston has proven that he is the epitome of an inconsistent quarterback. Just two years ago, Winston threw for a league-leading 5,109 yards, but also a league-leading 30 interceptions. This year, he’s thrown for five touchdowns in a game, but has also had a game with no touchdowns and two picks. It’s nearly impossible to know which version of Winston Washington will face this Sunday, but creating pressure will likely egg on the turnover-happy version of Winston. Pressuring Winston will force him to make poor decisions and throw risky passes, and Week 2 against the Panthers was Exhibit A for said gameplan. Carolina blitzed Winston like there was no tomorrow, swarming him the entire game; the Panthers racked up 15 QB hurries, 29 QB pressures and six sacks. The Saints failed to string together a drive of more than six plays or 25 yards the entire game en route to a 26–7 beatdown. If Washington can finally create constant pressure and capitalize on short-field opportunities, they will have a significant advantage over New Orleans.

Although he isn’t off to the best start, Alvin Kamara is still one of the premier halfbacks in the league. He hasn’t had the passing volume he previously received with checkdown savant Drew Brees, but he still poses a threat each week to explode for 100+ receiving yards and multiple touchdowns. Washington’s defense has been disappointing so far, but stopping Kamara in the passing game needs to be the defense’s main priority. The Saints have one of the worst pass catching units in all of football in terms of talent, so if Washington keys in on Kamara, they are in prime shape to field their first impressive defensive performance of the season.

Use Curtis Samuel out of the backfield

Curtis Samuel is a versatile weapon that Washington picked up this past offseason and presents lots of flexibility for Scott Turner and the offense. He missed the first three games of the season with a groin injury and made his return last week against Atlanta. The talented wideout caught all four of his targets for only 19 yards, but he is back and healthy, and that’s all that matters right now. Samuel can line up in the slot, on the outside and in the backfield. He presents a mismatch to many opposing defenses in the backfield because the linebackers can’t stick with him in coverage. The Saints have talented linebackers, but Samuel creates so much uncertainty that he should be efficient out of the backfield. Whether it be through handoffs or receptions, using Samuel out of the backfield will help to keep the Saints’ defense honest.

For Washington to get over the .500 mark for the first time this season, they need the defense to block out all of the criticism and show up like they did during the second half of last season. The offense has played well thus far, and adding Curtis Samuel’s dynamic playmaking gives Washington a promising chance to come out of the weekend with a fantastic victory.