The Black and White • October 7, 2021 • https://theblackandwhite.net/70372/feature/how-diary-of-a-future-president-encourages-female-and-minority-children-to-dream-big/ 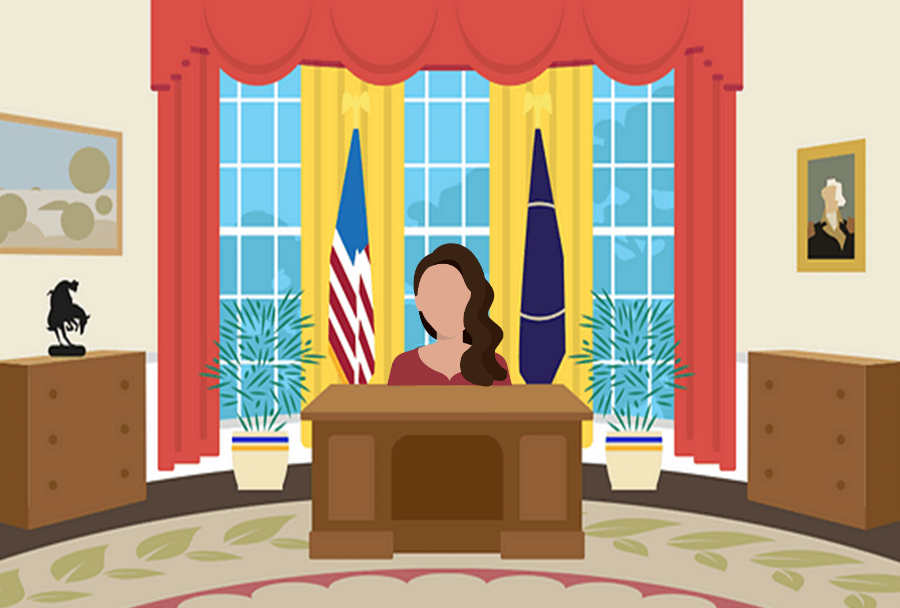 While the show features a Hispanic American woman in the country’s most powerful position, 46 out of the 47 actual American presidents have been white males, and during the buzz of the 2016 and 2020 elections, voters questioned the electability of candidates like Kamala Harris simply because of these women’s skin color and gender.

Close your eyes, and envision a young Hispanic American woman sitting in the President’s chair in the Oval Office. She glances up below a stately American flag and the gaze of a portrait of Benjamin Franklin, and the President accepts a FedEx package that her mother sent her containing her sixth-grade diary. The small, seemingly insignificant book is actually a day-by-day account of how she got to the room she’s in now.

This composes the opening shot sequence of Diary of a Future President, an original show on Disney Plus, which follows the middle school mishaps and accomplishments of fictional character Elena Cañero Reed, an ambitious Cuban American tweenager who grows up to become the President of the United States.

As a preteen, Elena lives with her loving mother Gabby, a dedicated lawyer, and her older brother Bobby, who struggles with his sexuality as the show goes on. The beginning of the series illustrates the family’s grief over the recent loss of their devoted father — a loss that ends up shaping Elena into someone who never forgets the significance of family.

Elena is a bright and dedicated student with a strong desire to stand up for injustices in her community. As she aims to find a niche while dealing with classic middle school growing pains, Elena discovers a passion for leadership.

The show focuses on the vulnerabilities young people feel as they grow up, even those like Elena, who eventually accomplish amazing feats. This relatability helps Diary of a Future President to accurately portray the rollercoaster of tweenage years.

From shifting teenage social dynamics to quintessential coming-of-age failures, Elena encounters many of the obstacles a lot of tweens deal with. In response to these struggles, the future president doesn’t always make the right decisions: she hosts a party behind her mother’s back, hogs the work for a group project, fails to support her best friend at a significant event and insults her mother’s overprotectiveness in front of the entire school.

As she stumbles, however, Elena learns that being a leader means giving every person a voice and amplifying their strengths rather than making one’s position all about themself. Elena’s journey of reflection offers a valuable lesson: everyone falls short of perfection sometimes, but it’s how we react to these situations and amend our mistakes that transform us into who we are.

While the show promotes relatability among all teenagers, it also narrows down its key demographic audience by giving young viewers from diverse backgrounds the courage to pursue dreams they may have previously thought were impossible.

The aspect of the show I admire the most is its representation of young minority children. While the show features a Hispanic American woman in the country’s most powerful position, 46 out of the 47 actual American presidents have been white males, and during the buzz of the 2016 and 2020 elections, voters questioned the electability of candidates like Kamala Harris simply because of these women’s skin color and gender. After the vice-presidential debate in 2020, viewers called Harris “catty,”‘snarky,” and “petty,” and someone who had “annoying facial expressions.” Kamala’s predicament exemplifies how all women in politics, but especially women of color, contend with negative gender stereotypes in the public eye.

In addition, the nation’s highest political offices continue to lack politicians who are racial or ethnic minorities. In the 117th Congress, only three out of the 100 total senators identify as African American, and there have been just 11 African Americans in the Senate in all of our country’s history. There are also currently only five Hispanic senators and three of Asian/Pacific Islander descent.

Diary of a Future President’s representation is precisely priceless because of the challenges that female and minority leaders contend with. Its display of both the heartwarming and dejecting aspects of a young woman of color’s political career make viewers feel that, in spite of this nation’s prejudice, anyone can redefine leadership.

Television is perhaps the best forum to portray stories that resonate with and inspire viewers. To have a show that portrays a minority woman in the president’s chair helps all viewers believe that one day, they can get there, too.

In an America where women and racial minorities face extra hurdles to stand on the national stage, Diary of a Future President allows young girls and minority children to imagine a world in which they can become the leaders they aspire to be. I highly recommend Diary of A Future President, an inspirational show which breaks down barriers and gives young viewers the courage to chase their dreams — all while providing a heartwarming and relatable storyline.