The Black and White • October 5, 2021 • https://theblackandwhite.net/70359/news/gasoline-like-smell-in-band-room-causes-after-school-evacuation/ 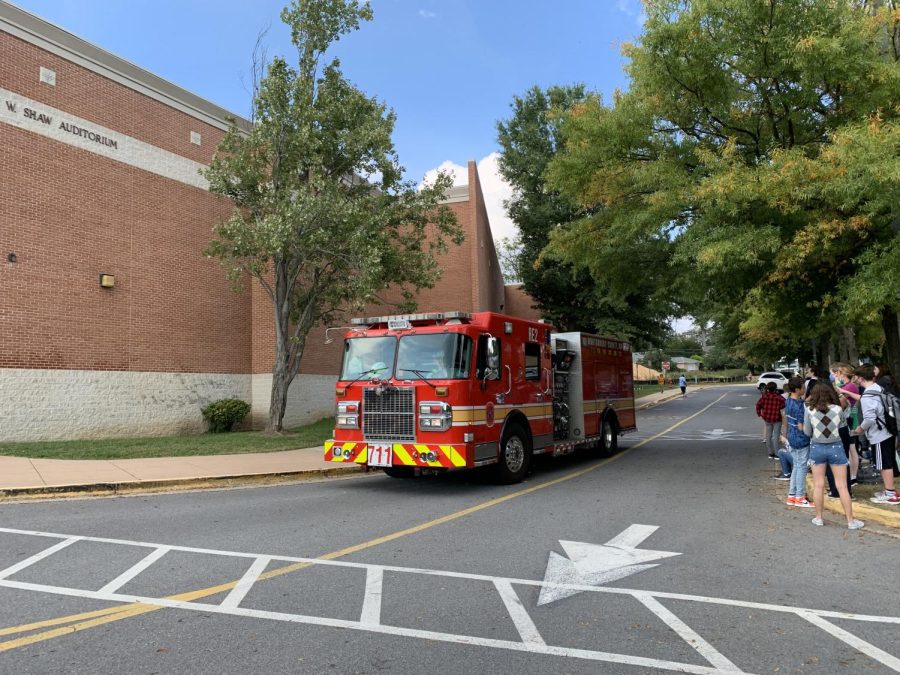 A fire truck arrives at Whitman as students and staff gather outside. Due to a gasoline-like smell in the band room, administrators initiated an evacuation of the school around 4 p.m.

By Kendall Headley and Tara Davoodi

Due to a gasoline-like odor in the band room, Whitman administrators evacuated staff and students from the school building at around 4:00 p.m. this afternoon. Bethesda fire and rescue services arrived shortly after to investigate the source of the smell, and participants in sports practices, musical activities and other extracurriculars waited outside the school until administrators allowed everyone back in the building around 4:45 pm.

The source of the odor remained unclear as of 5:00 p.m. The fire department left the school at around that time, but the music hallway and auditorium remained closed for students as of Tuesday evening.

Principal Robert Dodd told The Black & White that he and other administrators initially became aware of an unusual odor in the middle of the school day, but they didn’t consider it to be cause for an evacuation until the smell grew more intense after the school day ended. However, junior Rebecca Levy and her friend alerted band teacher Brendan Kelly to the odor at 7:45 a.m. after dropping their instruments off, Levy said.

Beginning as early as third period today, multiple band classes took place in the auditorium rather than the designated band space due to the odor.

Student musicians were allowed to collect their instruments from the band hallway as normal after the school day ended this afternoon, and the area “did smell a lot worse,” Levy said. The junior didn’t see any administrators in the vicinity as she picked up her instrument, she said.

Sophomore Joseph Akinyoyenu, who got evacuated from the chorus room this afternoon, said he had been aware of the odor in the band room the entire school day.

“It had been smelling like smoke or gas throughout the day in the music room,” Akinyoyenu said. “I wasn’t really surprised they rang the alarm.”

This wasn’t the first recent instance in which students and staff packed up their belongings after school hours because of a surprise alarm. A similar situation occurred two years ago, in the middle of the opening night of Whitman’s fall musical. The commotion, which was triggered by synthetic smoke machines, took place in the same wing of the building as the most recent event.

Levy said she didn’t know when administrators first began investigating the band room smell, but that she believes it’s imperative that they act quickly in scenarios like these.

“None of this really occurred to me that it was as big a deal as maybe it is,” Levy said. “Somebody should have been looking into it as soon as we said, ‘we smell gasoline.’”