The Black and White • September 27, 2021 • https://theblackandwhite.net/70249/news/administrators-postpone-start-of-mcap-testing-due-to-fiber-cut/

Administrators postpone start of MCAP testing due to fiber cut 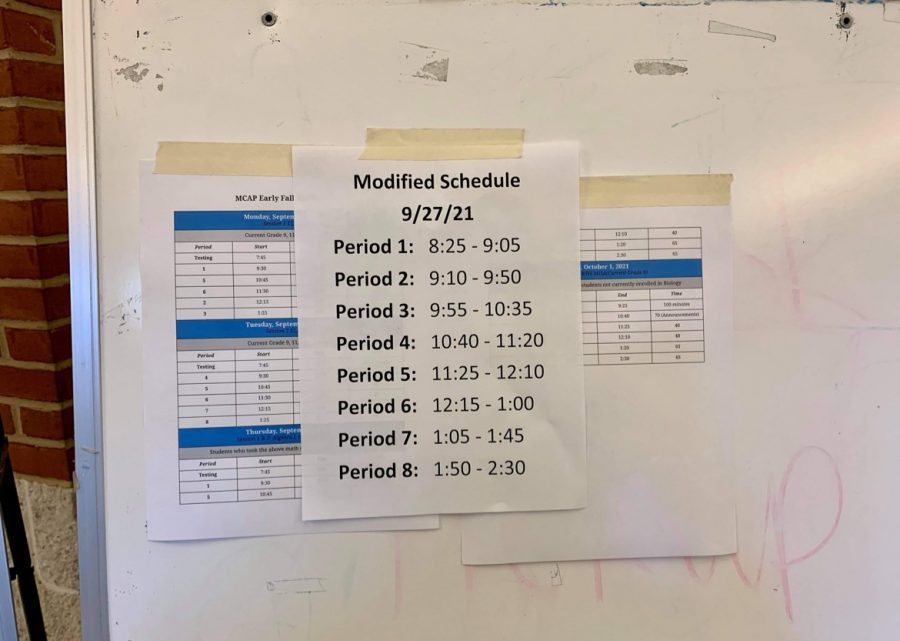 Administrators postponed this morning’s MCAP testing due to a fiber network break in the Whitman area.

Staff members had planned to administer various MCAP tests — and implement block schedules — every day this week except Wednesday. Because of today’s exam postponement, however, Monday’s bell schedule returned to an eight-period day. The second round of the English Language Arts test, which was supposed to be on Tuesday, will now take place on Wednesday.

IT Systems Specialist Travis Swiger first grew concerned that “the connectivity wasn’t what it should be” when he arrived at Whitman as planned at 5:15 a.m, he said.

“Upon inspection, there was no outside connectivity,” Swiger said. “While our internet worked — all of our network components worked within the school — they weren’t talking to the outside world.”

Swiger was unable to pinpoint the root of the issue until a technological expert specialist from the MCPS Central Office arrived at Whitman around 7:15 a.m. to investigate the malfunction. The county official realized that a fiber cut outside of the school building was disrupting Internet connectivity.

Around this time, Principal Robert Dodd emailed the community explaining that Whitman’s internet was down; he noted that if service didn’t return by 7:45 a.m, the day’s testing schedule would revert to a regular bell schedule that lacked MCAP administrations. MCPS’ technological expert failed to address the connectivity malfunction before administrators decided around 8 a.m. that it was too late for students to test.

“The fact that we couldn’t get the testing off the ground is no one’s fault,” said AP NSL teacher Richard Obando. “The uncertainty led to a certain degree of chaos, although I felt like it was well-managed.”

A Comcast “backup internet” was in place in the morning, and some proctors instructed students to begin taking the MCAP using this service. However, after administrators announced the testing cancellation for the day, these staff members’ students had to halt their exams, which erased their progress.

Other teachers were apprehensive to start the test without the “green light” from the administrators, Obando said.

Even with this morning’s unplanned events, administrators already had some insight into the school’s connectivity issues. Dodd had emailed staff members on Sunday, notifying them the building’s WiFi was experiencing issues.

Junior Samuel Andonov said he was annoyed at how “unprepared” administrators seemed while addressing the connectivity issues since Whitman often faces such hindrances during standardized testing sessions.

“Everything felt very last-minute,” Andonov said. “They definitely didn’t manage it properly and should have been more organized.”

Obando said that the schedule change will have a “ripple effect” on some staff members’ teaching plans. Many educators, especially AP teachers, will have to “prepare students differently,” readjust lesson plans and reschedule assessments, he said.

“Everyone is experiencing the same thing,” Obando said. “We just need to roll with the challenges.”