The Black and White • September 27, 2021 • https://theblackandwhite.net/70247/sports/three-takeaways-from-the-wfts-abysmal-week-3-performance/ 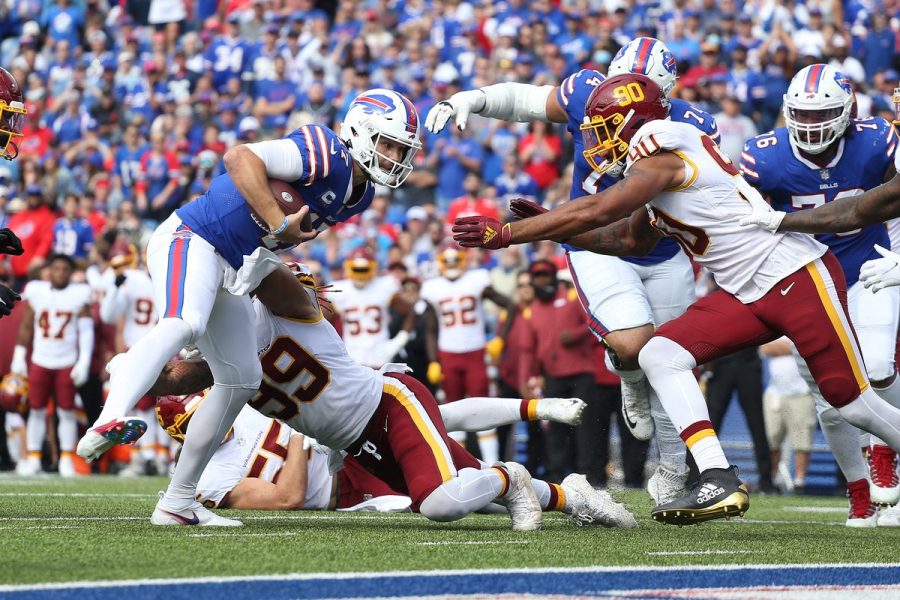 If you look at the history section of the Washington Football Team’s Wikipedia page, you might find that Josh Allen is the “owner” of the franchise.

After he embarrassed Washington on Sunday afternoon, that may as well have been the case.

Allen completed over 74% of his passes for 358 yards and four touchdowns and another score with his legs. With doubts regarding the legitimacy of Washington’s defense looming after two subpar performances, they let Allen roast them en route to a 43–21 shellacking.

The defense is not living up to the hype

Coming into the season, Washington’s defense was ranked second in all of football by PFF. To begin the 2021 campaign, Washington’s defense has been alarmingly bad, allowing an average of 432 yards/game (31st) and 30.7 points/game (29th) to start the season. Washington barely got pressure on Josh Allen, allowing him to pick apart the defense all afternoon. Not only did the defensive line struggle, but the secondary also had trouble containing Buffalo’s receivers. Stefon Diggs, Cole Beasley and Emmanuel Sanders all had at least five catches and 60 receiving yards. Everyone knows the talent this defense possesses, and to be fair, Washington’s first three games have been against above average quarterbacks in Justin Herbert, Daniel Jones and Josh Allen. However, until they prove what they are capable of, opposing offenses will have nothing to worry about.

Taylor Heinicke didn’t look the part of a starter

After a phenomenal performance against the Giants in Week 2, Heinicke had fans hopeful that he could be the solution to Washington’s lingering quarterback problem. While he still has the potential to be that guy, Heinicke didn’t play to the level he needed to give Washington a chance against the potent Bills. He threw two bad interceptions, and it felt like every throw he made was contested. Whether that was a decision making problem or just an off day for Washington’s receivers, Heinicke looked completely out of sync for most of the game. It’s good to have a quarterback that’s willing to make risky throws and not worry about mistakes, but not when every throw feels like a risk. Heinicke needs to look for shorter, safer throws that won’t allow the opposing defense the opportunity to cash in on turnovers.

The offense can’t stay on the field

Through the first three games, Washington has lost the possession time battle every time. Ask most football coaches and they’ll say that having less possession time than your opponent is a method for disaster. Washington can focus on this problem from two different angles; The defense hasn’t been performing to the best of its abilities, as they allowed the Bills to convert 9–15 third downs and gave up 29 first downs in the entirety of the game. On the Washington side, the offense went a stagnant 2–11 on third down, moving the chains only 13 times. The offense has to be able to string together longer drives, and the defense has to get off the field on third down far more than they have been.

There were still a few positives from Sunday, however. Antonio Gibson showed his versatility on a 73 yard catch and run touchdown; Dustin Hopkins ended up recovering his own kickoff on a very weird play which eventually led to a touchdown. It’s still very early in the season, and since Washington plays in the NFC Least, making the playoffs isn’t out of the conversation just yet. However, Washington needs to figure things out fast — especially on defense — if they want a chance to repeat as division champs. If Washington can’t fix their problems, it’s going to be a very long 18 weeks for both fans and players.