The Black and White • September 22, 2021 • https://theblackandwhite.net/70144/news/new-addition-sparks-praise-among-students/ 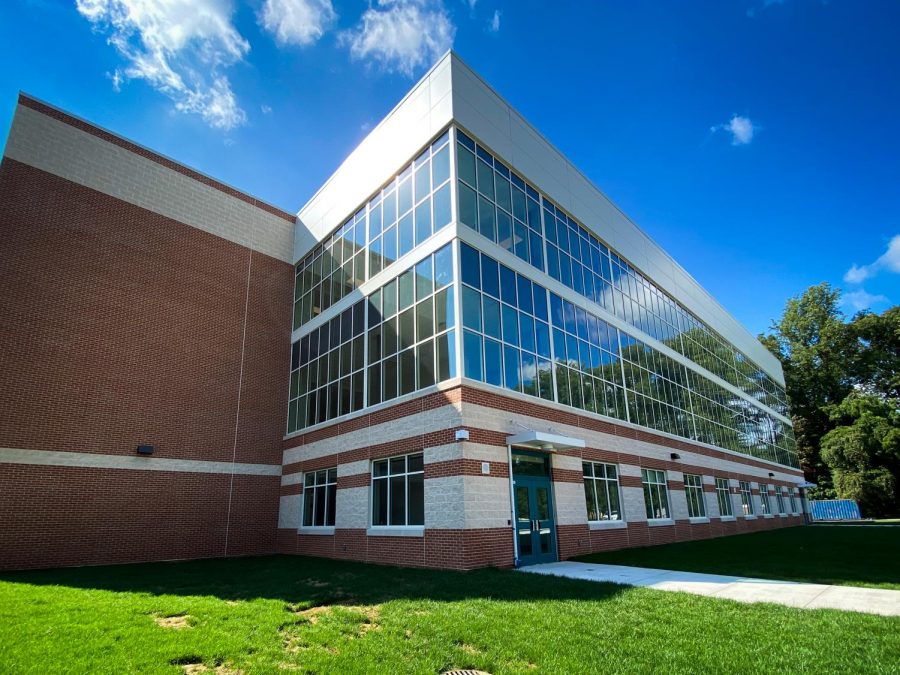 Take a look at Whitman's new addition in the Black & White's slideshow.

After nearly two years of construction, Whitman’s recent addition opened for students and staff at the beginning of this school year. The expansion consists of a three-story structure with 18 new classrooms and an outside parking lot with 130 lots for staff.

The extension, which MCPS implemented as a solution to the school’s overcrowding, replaced Whittier Woods Elementary School and the Whittier Woods Annex. The addition showcases a commons area, a courtyard and three stairwells that connect the second and third floors of the original building to the new structure.

The addition’s unveiling has received approval from students, with many praising the extra space the building provides them with.

“One thing I like about the new commons area is that it’s very open and spacious,” junior Iris Berkhout said. “Every morning my friends and I hang out there before the bell rings.”

Sophomore Eden Chambers is also a fan of the addition. She appreciates its ample room, which she thinks makes Whitman feel more comfortable, she said.

“It’s really spacious and has a lot of natural light coming in,” she said. “It adds a nice atmosphere to the school.”

Due to the increased number of hallways to accommodate pupils, many students have experienced efficient commutes between classrooms and have navigated the new building with ease.

On the other hand, junior Isabel Wadhwani said she believes that the new building is impractical and, far too often, packed with students.

“Whitman’s expansion is more designed for elegance than convenience,” she said. “The narrow staircases are always crowded and the fourth floor is really confusing to me.”

Digital Arts teacher Vivian Wingard, whose classroom is in the new building, dislikes the disorganization of many of the rooms in the addition. Even worse for Wingard, her classroom number has changed multiple times.

“The room numbers are all mixed up,” she said. “My room has gone from E-202, to 241, and now it’s just 202. My classroom is also isolated from the other 240-number classrooms, since they are located in a different hallway.”

Students and staff have only had a few weeks to acclimate to the new building. Even so, some said they’re bored with how the community has dubbed the $24.5 million add-on to the school: “the new addition.”

“I still don’t really know what to officially call it,” Chambers said. “But I think Whitman 2.0 will suffice for now.”