The Black and White • September 17, 2021 • https://theblackandwhite.net/70105/sports/three-takeaways-from-the-wfts-electric-thursday-night-victory-over-the-giants/ 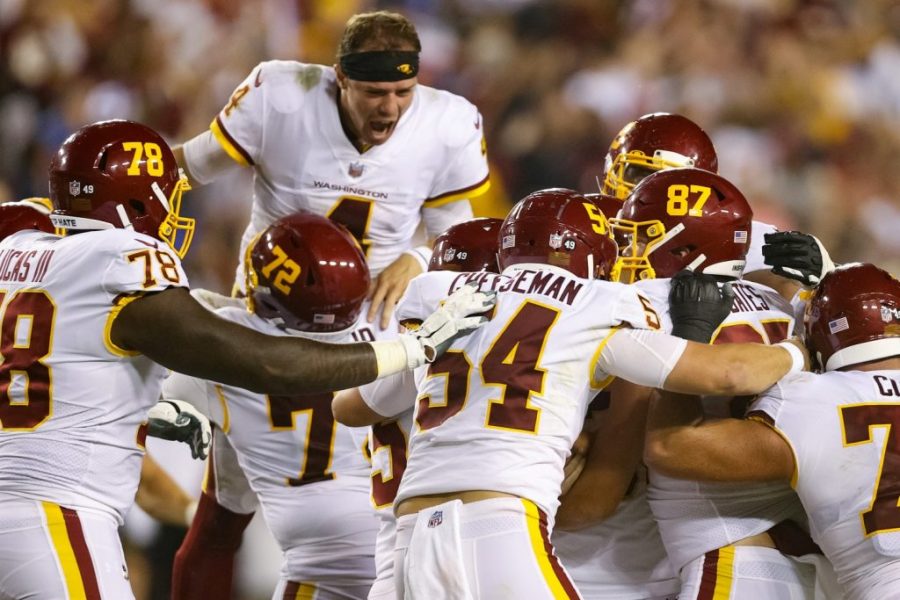 The holiday season came early for the Washington Football Team on Thursday night, as the Giants gifted them a victory in the form of costly penalties and mental mistakes. New York had several chances to pick up their fifth straight win against Washington, but a horrendous drop by Darius Slayton, unassertive defense and 11 penalties washed away a brilliant performance by Daniel Jones and what should’ve been New York’s first win of the season.

The Giants lost in the most Giants way possible; despite Dustin Hopkins shanking the game-winning field goal, an inexcusable offsides penalty was called on Dexter Lawrence. On the second field goal attempt, Hopkins drilled a 43-yard field goal on the resulting untimed down, giving Washington a much-needed victory and leaving Giants fans asking themselves the all-too-familiar question of “Why do I put myself through this every week?” The Giants gave Washington one too many chances to win, and the WFT capitalized in what was a thrilling game from start to finish.

For Washington, most elements of their game improved from Sunday’s disappointing loss to the Chargers. The offense put on a much better performance, totaling 30 points and 407 total yards. Most crucially, the defense played much better than they did a few days ago. While pressure on Daniel Jones wasn’t as consistent as they would’ve liked, Washington still combined for four sacks — two from Jonathan Allen, and one apiece from Montez Sweat and Kendall Fuller.

Here are three takeaways from Thursday’s thrilling victory—two positive and one negative:

Until an interception late in the fourth quarter — simply an incredible play by James Bradberry — Heinicke was having an incredible game in just his second career start. He finished 34/46 for 336 yards, two touchdowns and one interception. After a few missed throws early on, Heinicke settled down and picked apart a Giants defense that played extremely soft coverage for most of the game. His best throw of the night came at the perfect time: with just 4:30 left in the game, Heinicke threw a laser to the back corner of the endzone, with tight end Ricky Seals-Jones hauling in a spectacular toe-tap touchdown to give Washington a 27–26 lead. Heinicke proved that he deserves the shot to be Washington’s starter for the remainder of the season, even when Ryan Fitzpatrick returns in two months.

Terry McLaurin needs this kind of volume every game

Leading up to the game, fans knew that a major key to victory was Terry McLaurin’s involvement. We here at the Black & White even said it ourselves in Wednesday’s column. In Sunday’s loss to the Chargers, McLaurin finished with just four targets, nowhere near enough for a player of his caliber. Heinicke must have thought the same thing, as McLaurin was targeted a team high 14 times, hauling in 11 catches for 107 yards and a touchdown. He made James Bradberry, a top five cornerback, look lost more often than not. While none of his catches were as spectacular as last week’s, he had to leave the ground to make a few nifty catches on balls that weren’t thrown perfectly. It was magnificent to see McLaurin balling, and hopefully his rapport with Heinicke only grows as the season progresses.

Washington needs to learn how to play without being penalized. In Week 1, Washington totaled eight penalties for 57 yards and nine penalties for 80 yards on Thursday. A roughing the passer penalty on Chase Young in the first quarter gave the Giants a new set of downs, and Daniel Jones eventually scored a few plays later. A penalty count that high would usually mean disaster, but thankfully, the Giants were also undisciplined. Penalties didn’t sink Washington this time around, but this is still a major issue that needs fixing.

Wins are wins, and Washington got a win, which is by far the most significant part of each week. They still have some things to work on in the next week of practice, but coaches, players and fans should be happy with what they saw on TNF. Washington will travel to Buffalo to take on Josh Allen and Co. in Week 3 and will have extra time to prepare for what is sure to be a tough test against a high powered Bills offense.