The Black and White • August 31, 2021 • https://theblackandwhite.net/69849/news/students-endure-school-bus-transportation-issues-on-first-day-back-at-whitman/ 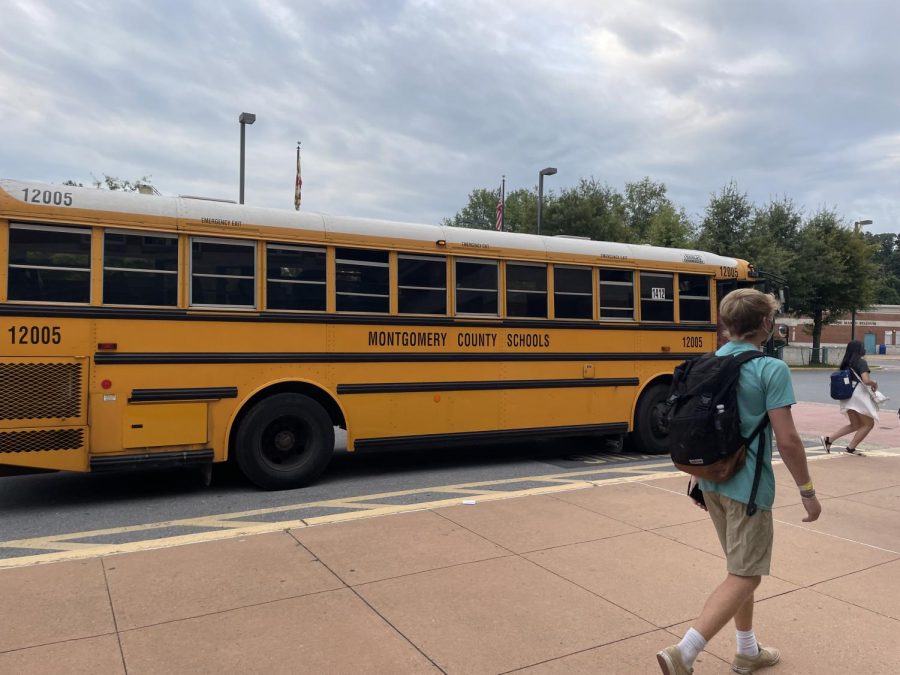 On the first day of school, many students' school buses were late, overcrowded or both. One bus also broke down.

On the first day of the school year, a number of Whitman students experienced unusually cramped conditions on their school buses, and many others endured severe delays while waiting for their transportation in the afternoon. At least one bus also broke down, forcing some students to ride home on a bus that they didn’t intend to take.

The issues followed MCPS’ recent announcement that the school district is short 100 drivers for its roughly 1,300 buses to begin the academic year, and that the school system is relying on bus depot supervisors and other employees to fill gaps in coverage.

MCPS officials reassured parents that the shortages would not limit students’ abilities to comfortably travel to and from school. On at least one bus that travelled from Whitman yesterday, however, ridership greatly exceeded the number of available seats, compelling students to find alternative seating options.

“My bus was very overcrowded — about six kids were sitting in the aisle and some seats had four people,” junior Erica Posner said. “People were extremely uncomfortable and hot.”

One bus’s mechanical failure that same afternoon exacerbated the crowding, forcing many students to ride home on a different bus with students travelling in other directions.

“When my bus broke down this afternoon, students were sitting on a hot, crowded bus,” said one freshman, who asked to remain anonymous.

In addition to cramped conditions, some students reported lengthy delays in their vehicles’ arrivals at Whitman in the afternoon. After waiting nearly 30 minutes at the school for their bus to arrive, some assumed they had missed it, one junior who wanted to remain anonymous said.

“A large group of us were all outside Whitman waiting, and the bus came eventually, but every seat was filled and cramped,” the junior said. “It was awful.”

Temperatures reached 93 degrees at the school Monday afternoon. Nearly a dozen students said that the heat made the delays and overcrowded bus conditions all the more uncomfortable for them.

As MCPS attempts to fill the bus driver shortage, many hope that yesterday’s problems won’t repeat themselves in the coming weeks, with some students — like Posner — unaware that the district was even facing gaps in transportation staff.

“There were lots of sweaty kids with their backpacks on their laps,” Posner said. “I think that there’s definitely a better way to handle the situation, especially because of how hot it is.”