The Black and White • July 20, 2021 • https://theblackandwhite.net/69787/feature/she-puts-everything-into-her-work-music-teacher-terry-alvey-retires-after-15-years-at-whitman/

“She puts everything into her work”: Music teacher Terry Alvey retires after 15 years at Whitman 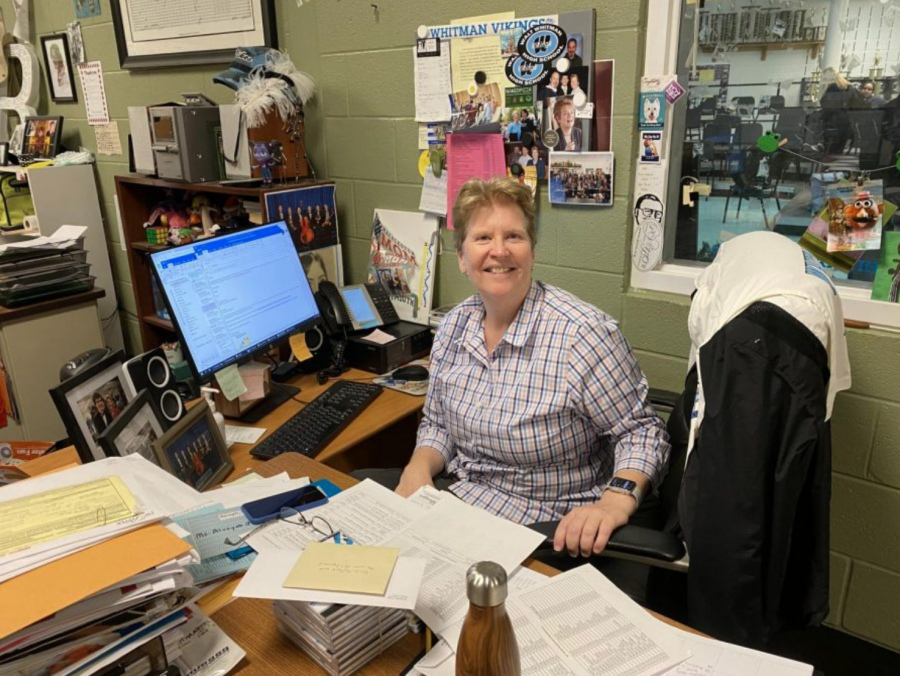 Music teacher Terry Alvey is retiring this year. As the leader of Whitman’s instrumental music program, Alvey ensured that her students felt motivated to play music with passion, according to some of the young performers she taught.

As music teacher Terry Alvey’s students readied their instruments and opened their sheet music, Alvey greeted the novices with a phrase that inspired them to sit a little taller and play with more vigor. For the master educator, all it took was seven words: “Play like Jesus walked into the room.”

“She always makes sure that everybody knows that they’re good musicians, they’re in the ensemble for a reason and that they deserve to be there,” said rising senior Elizabeth Dupree, a wind ensemble musician.

Alvey has an excellent sense of humor, and she would frequently tell her students jokes, rising junior Elena Kotschoubey said. At the same time, Alvey used “tough love” and continuously pushed her students to work their hardest during class, Dupree said.

Alvey tossed out her trademark catchphrases before performances to try to motivate students and settle their nerves. “Play like Jesus” had a special place among Alvey’s many memorable sayings, said Kotschoubey, who plays violin in the pit orchestra.

“Every day, without fail, she would tell us we needed a Red Bull infusion,” Kotschoubey said.

Kira Gandolfo (‘19) remembers her high school years with Alvey fondly. One of her favorite parts of acting in Whitman musicals was watching Alvey masterfully conduct the pit orchestra and give the students musical cues, she said.

“She inspired so many students to pursue music in ways that I don’t think a lot of other music educators could,” Gandolfo said. “I miss her happy-go-lucky attitude and positive spirit.”

Gandolfo was among roughly 40 current and former students and staff members who celebrated Alvey’s career at a socially distant gathering in the educator’s backyard on June 12.

Retired choir teacher Jeff Davidson, who reconnected with Alvey at the retirement party, said that Alvey’s dedication to her students was nothing short of exemplary. Davidson and Alvey worked together in the music department for over a decade before Davidson retired in 2019. The duo led several concerts together, including the choral and instrumental groups’ performances at Carnegie Hall in 2010.

“Our desks were right across from each other,” Davidson said. “She was so well respected by students, parents and the administration.”

Whitman’s music community flourished under Alvey’s instruction, Davidson said. In Lieberman’s view, Alvey had a strong work ethic and paid constant attention to her musicians. For her students, she was what made the musical experience at Whitman spectacular.

“It’s her character — the way she applies herself at her work — that’s always going to stick with us,” Lieberman said.

Making music with her students was particularly special to her, Alvey said. She bonded with students through songs, and she encouraged them to use musical notes to express themselves. As she settles into retirement, Alvey said she knows that joining her students in melody was an experience she will always look back on with love.

“I played music with kids every day,” Alvey said. “It’s a communication that we have that doesn’t have words. We all speak this language, and we don’t really talk. We just express.”