The Black and White • June 19, 2021 • https://theblackandwhite.net/69781/feature/community-assesses-slow-emergence-quick-life-and-death-of-brood-x-cicadas/ 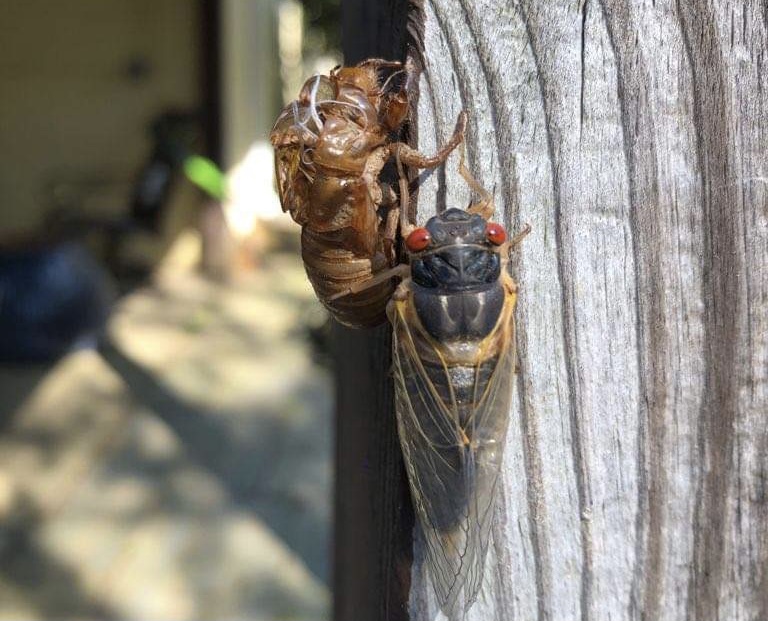 The Brood X cicada population only lives for a few short — but memorable — weeks above the ground.

An ear-piercing buzz. Extraterrestrial-looking shells everywhere. Trees coated with the insects that produce these husks. As warmer months have crept in, a cherry has found its place on top of this tumultuous past year: the re-emergence of cicadas.

The summer of 2021 has marked the resurgence of Brood X, a large group of cicadas that arise from below the ground every 17 years throughout the eastern part of the United States.

There are 3,000 species of cicadas, each of which falls into one of two categories: annual and periodical. Annual cicadas appear every year and come in relatively minuscule numbers. Periodical cicadas like Brood X, on the other hand, emerge from below the dirt in enormous quantities after years underground.

Since early May, Brood X cicadas have exited the soil from tunnels that they dug up, said Alireza Shokoohi, an entomology graduate student at the University of Maryland.

“Once the temperature under the soil reached a certain point — 64 degrees — that was the trigger to let all the cicadas know to emerge,” Shokoohi said.

Shokoohi is part of Cicada Crew UMD, a group of graduate students and professors committed to spreading awareness about Brood X.

Brood X cicadas only live above the ground for three to four weeks. This short period is dedicated to mating, during which male cicadas sit on tree branches and produce a call to attract females.

“Cicadas can get pretty loud,” Shokoohi said. “They can get as loud as a lawnmower three yards away.”

Cicadas’ mating cries can reach up to 90 decibels. A subway train, in comparison, only produces a noise of 75 decibels.

“I have to admit they can be annoying,” junior Audrey Ostoyich said. “The sound they make is horrible.”

Despite her frustration with cicadas’ noise levels, Ostoyich, the President of Whitman’s Save the Environment Association, highlighted the insects’ contributions to the environment. Cicadas prune the weak branches of trees by laying their eggs in them, and in doing so, the trees don’t have to waste their energy on a dead or diseased branch, Ostoyich said.

“They definitely get a bad rep, which is understandable because they come out in such large amounts,” she said. “But they really do help the environment more than they hurt it.”

Shokoohi agreed that cicadas benefit the environment’s well-being. He emphasized that cicadas’ nutrient-rich bodies help sustain a variety of organisms that feed on the insects, including squirrels, raccoons and other small mammals.

Even after cicadas die, their corpses provide the soil with nutrients during the decomposition process. The cicadas’ lifeless bodies also act as a fertilizer that a variety of plants take in, Shokoohi said.

Graduated senior Toni Lay has cherished spending time with fellow recent Whitman alumni in their final months together before parting ways for college, but Brood X’s emergence has raised issues with her ability to do so, she said.

“I am not a big fan of bugs,” Lay said. “With all the cicadas, it’s less appealing to do things outside that I normally do.”

Up to 1.5 million cicadas can populate one acre, meaning that the Brood X population has found itself in the trillions across the East Coast.

Shokoohi said cicadas pose no harm to humans — except perhaps the shock that can come with surprise meet-and-greets.

“If you’re riding your bike down the street, there is a large chance you’ll accidentally hit one,” Shokoohi said. “But really, they’re not dangerous at all. They’re not venomous, they don’t bite, they don’t sting.”

For Shokoohi, Brood X’s entrance into the outside world has been an “amazing natural phenomenon.”

“17 years is a long time,” Shokoohi said. “There’s only a couple times you’ll see something like this. It’s a good idea to make the most of it.”