I scream, you scream, we all scream for… tiramisu? 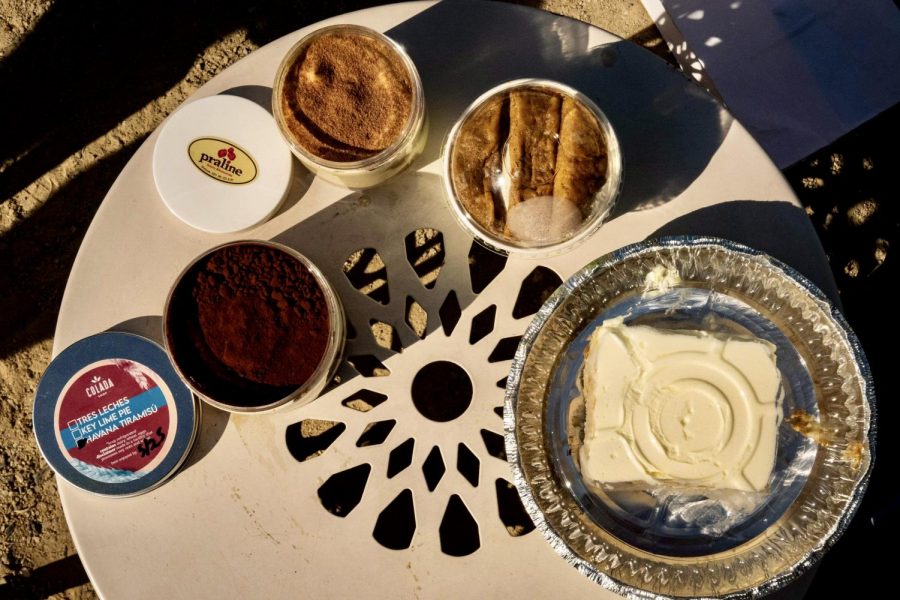 The question of which local culinary institution serves the tastiest tiramisu has been a mystery for the ages... until now.

By Jack McGuire and Matthew Lennie

Whether you know it as a scrumptious Italian dessert or a lyric in Macklemore’s poorly-received song “Downtown,” tiramisu is an integral part of contemporary American culture.

The dish became a classic in the United States after Tom Hanks’ character expressed a lack of knowledge about tiramisu in the timeless romantic comedy “Sleepless in Seattle” (not to be confused with the critically acclaimed Phineas and Ferb episode “Meapless in Seattle”).

The combination of espresso powder, cocoa, mascarpone and ladyfingers create a delightful combination that is as crisp as a SNO award-winning Black & White article.

In the Whitman community, there are a number of establishments that offer tiramisu on their menus, so we decided to determine which establishment could claim the title of “Top Tiramisu in Town.”

In our quest to find the tastiest tiramisu in all of Bethesda, we visited five fine dining establishments in and around the unincorporated community: Vie de France, Pizzeria Paradiso, Praline Bakery, Colada and Gregorio’s Trattoria.

Located in the heart of Potomac, Maryland, Vie De France is a French chain bakery that — believe it or not — serves tiramisu.

Costing only $5.29 with tax (one of the cheapest options among the restaurants we visited) yet coming in at the size of a moderately large toad, Vie De France’s tiramisu was definitely the biggest bang for our buck. It was almost as excellent of a value as the Milwaukee Brewers acquiring future MVP Christian Yelich in exchange for a lackluster group of prospects.

Even better, the tiramisu was nothing short of delectable. The espresso was pronounced, the mascarpone didn’t overwhelm and the ladyfingers were baked to perfection. However, the structural integrity of the tiramisu was not top-notch. Just like the famous London Bridge, this thing was falling down!

Though we were unable to reach them for an interview, we feel confident in saying that the hip hop group Cypress Hill would agree that the first-rate ability of a French bakery to recreate this classic Italian dessert was “insane in the membrane.”

Pizzeria Paradiso in Spring Valley dishes out excellent pizza, but pizza-making wasn’t the capability that the institution was on trial for. In our highly reputed opinion, the restaurant didn’t prove to be nearly as strong in its dessert game.

The tiramisu was passable. Frankly, for the most part, all tiramisu is. But with a $7.00 price tag, this dish didn’t feel like the best value.

The tiramisu filled a Dixie Cup-esque container, making the serving one of the smaller portions we tasted. Granted — just like Marcus “The Worm” Hicks’ jazz in an unforgettable episode of the “Colgate Comedy Hour” — the flavor still came through quite nicely. However, somewhat untraditionally, the ladyfingers rested on top of the mascarpone. This left them pretty much unintegrated from the rest of the dish.

Also, the espresso flavor was hardly there. We were hoping for a pronounced coffee taste in our tiramisu. All great dessert connoisseurs require caffeine. In the words of Wham!, “Wake me up before you go-go.”

Going into this tiramisu competition, we expected Praline — a French bakery and bistro in the Sangamore shopping center — to come out on top, much like Justify did at the 2018 Belmont Stakes.

When we acquired the tiramisu, we were intrigued to find that the dish came in a jar, a convenient configuration for any on-the-go tiramisu needs. Also, when we first opened the jar, the dessert struck us as aesthetically pleasing. The espresso powder, which came in a UPS shade of brown, sat perfectly atop the mascarpone.

Unfortunately, the love story came to an end when we bit into the tiramisu. There was a strong vanilla flavor that took over the dish. We also realized that the jar format gave off pudding vibes, not tiramisu vibes. There is a time and a place to enjoy a cup of Kozy Shack, but it is important to clearly distinguish between pudding and tiramisu.

Colada, a new Cuban restaurant in Cabin John Village, offers a “Havana inspired” tiramisu. Given the hoopla surrounding the dining establishment, we felt it necessary to give the café a try.

Just like the CIA-trained operatives in the Bay of Pigs Invasion, we quickly approached the Cuban restaurant. However, unlike the United States government, we were successful in our goal.

Reminiscent of the Praline tiramisu, the Colada dish came in a container. One might think that this would make for a tidy tiramisu, but unfortunately, the enormous top layer of espresso powder created a mess on our table as we dove into the dessert. The mascarpone also dominated the show.

However, the tiramisu had an even blend of the other core ingredients. This made Colada’s product one of our favorites.

Originally, we planned on getting tiramisu from a local Whole Foods. A former Black & White Online Managing Editor had given us a tip that the supermarket was home to the best tiramisu in Bethesda. But we had already eaten four tiramisus in one sitting and were feeling rather lazy, so we opted to trek a shorter distance to the Giant for tiramisu instead.

At the Giant, there were several products that shelves labeled as “tiramisu,” but unfortunately, after close inspection of their price tags, we found they were just chocolate trifle cakes. When we brought this to the attention of a worker at the bakery, they informed us that they did not know what tiramisu was. Discouraged, we visited the nearby Gregorio’s Trattoria, an Italian bistro that luckily did sell tiramisu.

Coming in at a whopping $8.50, Gregorio’s offering was the priciest dish we sampled. Fingers crossed the B&W reimburses us for this investment.

While other establishments seemed to prioritize mascarpone over ladyfingers, Gregorio’s did quite the opposite. The restaurant’s tiramisu had almost no mascarpone atop countless layers of ladyfingers. Granted, the ladyfingers tasted excellent, but the dish felt more like cake than tiramisu.

No matter where you get your tiramisu, you should treasure the dessert. However, for the sake of your mental and gastrointestinal well-being, we strongly advise against eating five tiramisus in the span of an hour.