The Black and White • June 10, 2021 • https://theblackandwhite.net/69753/feature/i-would-rather-drive-eight-hours-total-than-wait-students-go-to-lengths-to-get-covid-19-vaccinations/

“I would rather drive eight hours total than wait”: Students go to lengths to receive COVID-19 vaccinations 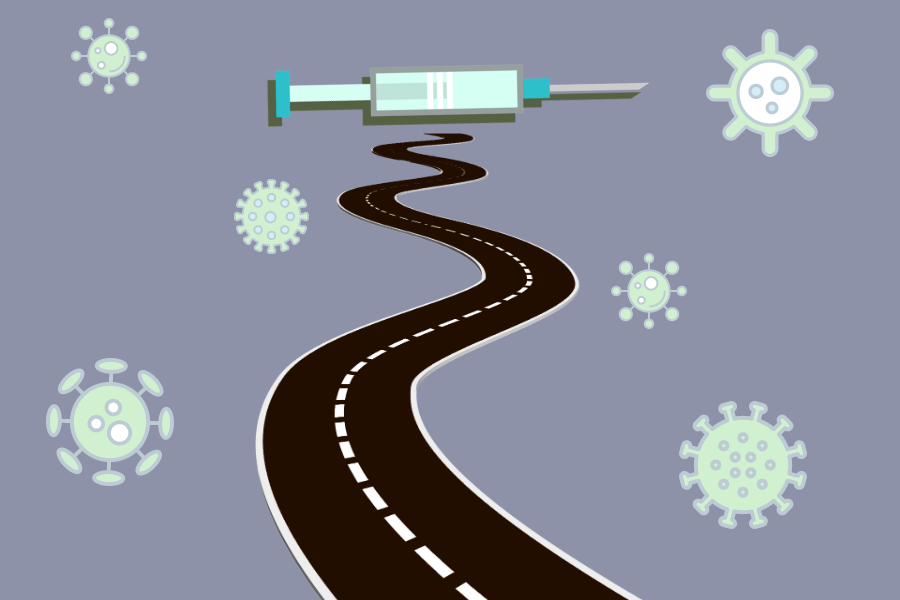 "The sophomore's relief transforms into dread — Centreville is two hours away from Bethesda, which means he’ll have to travel a total of four hours to receive each shot. It’s a long trek for one dose, let alone both doses."

After seemingly endless hours of searching through pharmacies’ websites on his computer, sophomore Finn Van Riper finally finds a pair of appointments at Walgreens to receive his Pfizer COVID-19 vaccination doses. He immediately hits the “register” button to secure his spot. For Van Riper, it feels like a weight has been lifted off of his shoulders; after over a year of lockdowns, masks and quarantines, his life can finally get back on track.

Then, Van Riper notices the location of the site: Centreville, Maryland. The sophomore’s relief transforms into dread — Centreville is two hours away from Bethesda, which means he’ll have to travel a total of four hours to receive each shot. It’s a long trek for one dose, let alone both doses. He wonders how many class periods he’ll miss on the days of his appointments, but a few missed hours of instruction is better than coronavirus symptoms, he says to himself.

Van Riper wasn’t alone in his willingness to go the extra mile for vaccine appointments. Since early March, some students have taken significant measures to get vaccinated.

Before vaccines became readily available to the Maryland public on April 12, some students had already “skipped the line” to secure vaccination appointments, either through unauthenticated websites or far-reaching rationales to fit into the “eligible” category.

Although sophomore John wasn’t at the top of the waitlist for the vaccine in March, he found a way to schedule his appointments that month. Like many students, he felt that he had hit his breaking point after spending over a year succumbing to online school and remaining isolated from his friends. He was willing to get vaccinated by any means necessary — even if it required bending the truth.

After weeks of searching for appointments through vaccination sites, John scheduled his vaccine in Waldorf, Maryland — a one-hour drive from Bethesda — for early April. Coming up with an explanation as to why he could get his shots ahead of time was the easiest part of the process, he said.

“My dad is a doctor, so we were able to schedule one for me as a ‘medical care professional’ since I work at his office at times,” John said. “It’s a first come, first serve situation. With thousands of people waiting to get vaccinated, I had to find another way to get served.”

John understood that what he was doing was morally questionable, but he didn’t feel much remorse, he said. He understood that he had cut in front of people who more urgently needed to get vaccinated than he did. But to him, he had simply taken an opportunity to receive protection against a deadly virus.

In addition to fudging personal information, some students have gone as far as to secure vaccination appointments through potentially illicit websites.

When junior Andrew received a link from family members that allowed him to schedule vaccine appointments in mid-March, he didn’t question the site’s legitimacy. Andrew refreshed the webpage constantly for over two hours before he was able to fill out his logistical information as quickly as possible to snag an available appointment.

“I scheduled my vaccination on a website that looked legit, but now that I think about it, it was probably illegal,” Andrew said. “I was told it was a website for vaccination cancellations. Apparently, anyone who had scheduled a vaccine but cancelled their appointment, their vaccine would go up on that website. The website is now taken down.”

Andrew didn’t see his vaccination as skipping the line since he believed that Maryland’s vaccination phases weren’t moving rapidly enough, he said.

Even after Maryland entered Phase 3 of its vaccination plan in mid-April, and the state’s eligibility requirements expanded to permit 70% of residents to get vaccinated, finding appointments was still difficult for many due to a high demand for doses. In mid-April, senior Maddie Kemp searched for appointments for over two days before she was able to successfully sign up to receive her vaccines in Salisbury, Maryland, a two-hour drive from Bethesda.

For Van Riper, his four-hour round trips were worth it to get vaccinated as quickly as possible.

“I couldn’t find any pharmacies offering appointments west of the Chesapeake Bay,” he said. “I would rather drive eight hours total than wait weeks or longer for an appointment around here.”

Though the process of nailing down vaccine appointments was tedious, getting the shots brought Van Riper one step closer to normalcy, he said.

“It felt really good to finally be fully vaccinated,” Van Riper said. “The best thing is, as vaccines become more available to the public, people receiving the vaccine won’t have to go through the hassle that I did.”