The Black and White • June 8, 2021 • https://theblackandwhite.net/69739/news/quizbowl-places-second-at-its-academic-semifinals/ 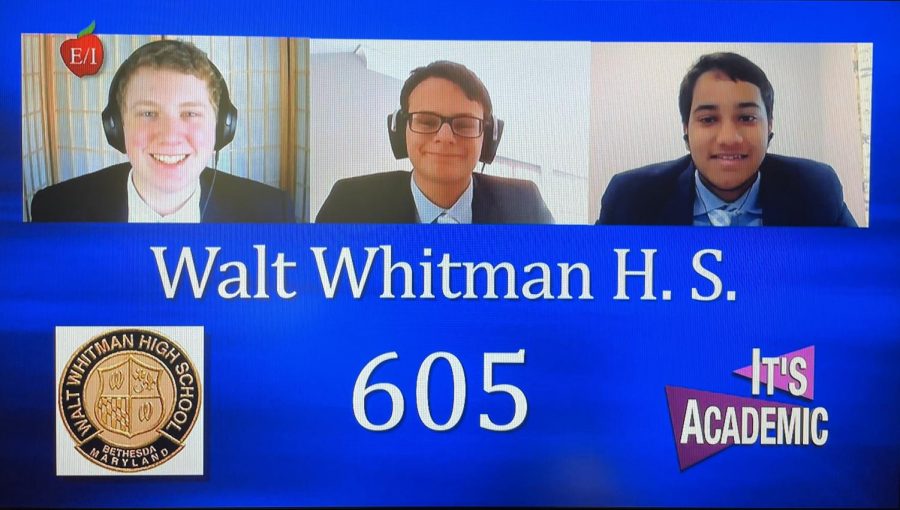 The game’s three segments contained questions about topics ranging from chemistry to Greek mythology. Whitman and Blake maintained perfect scores throughout the first two rounds, but Landon missed a question in the second round, causing the team to lose its opportunity to advance. The two public schools then both had a clear path to the championship at the beginning of their respective final rounds —  a “lightning” challenge that gave each team 45 seconds to answer a series of rapid-fire questions.

During Whitman’s lightning round, Goldberg, Harkins and Broker got stumped on a question about Achilles’ mother, forcing the team to “pass” on the question. In contrast, Blake ended their window of opportunity without breaking their answer streak, emerging with the highest score at the end of the game.

“Throughout the entire thing, I felt really good about how we were playing,” Harkins said. “Up until the last round, we answered every question correctly and didn’t pass on anything, so I think that we played just about as well as we could have.”

Quizbowl contestants can’t see their opponent’s scores in virtual games, a shift from the in-person tournaments of old, during which students vying for victory could keep tabs on the competition. The new score-tracking limitations don’t apply to team advisors like Whitman Quizbowl Coach Danielle Fus, however. Fus watched Blake’s faultless lighting round performance before Whitman’s competitors knew what they were up against — but the game organizers prohibited the instructor from telling her students that they would have to answer every question correctly to match the opposing team.

“Blake had already played their lightning round, but I couldn’t tell our guys that they had to get them all right to win,” Fus said. “So as soon as we passed on that question, I knew that we weren’t going to win. That was really tough for me as a coach to not be able to tell them.”

Nevertheless, Fus was proud of the team’s hard work and near-impeccable performance in the face of stiff competition, she said.

“I was really proud of what Josh, Toby and Kabir were able to do, and there’s no shame in losing to a team that got every single question right,” she said. “Blake played an amazing game and was an admirable competitor.”

Whitman’s Quizbowl team has previously achieved success similar to that of their recent performance, reaching semifinals in three of the past five years. This was the second consecutive year that the team finished their season by logging off a Zoom meeting. Prior to the COVID-19 pandemic, the ‘It’s Academic’ competitions took place in a studio. The switch to virtual tournaments has had a silver lining, Goldberg said.

“I was a bit less nervous, because I could get more sleep the night before, and there was a lot of stress in the studio, but at home, it’s much more relaxed,” Goldberg said. “I filmed every single one of these shows in my pajama pants.”

Although Whitman won’t advance to finals this year, team leaders are confident that the school’s Quizbowl competitors will continue to see success.

“There’s a lot of hope that I have for the team,” Harkins said. “We have a bunch of sophomores who are rising juniors now, and it’s their time to shine.”