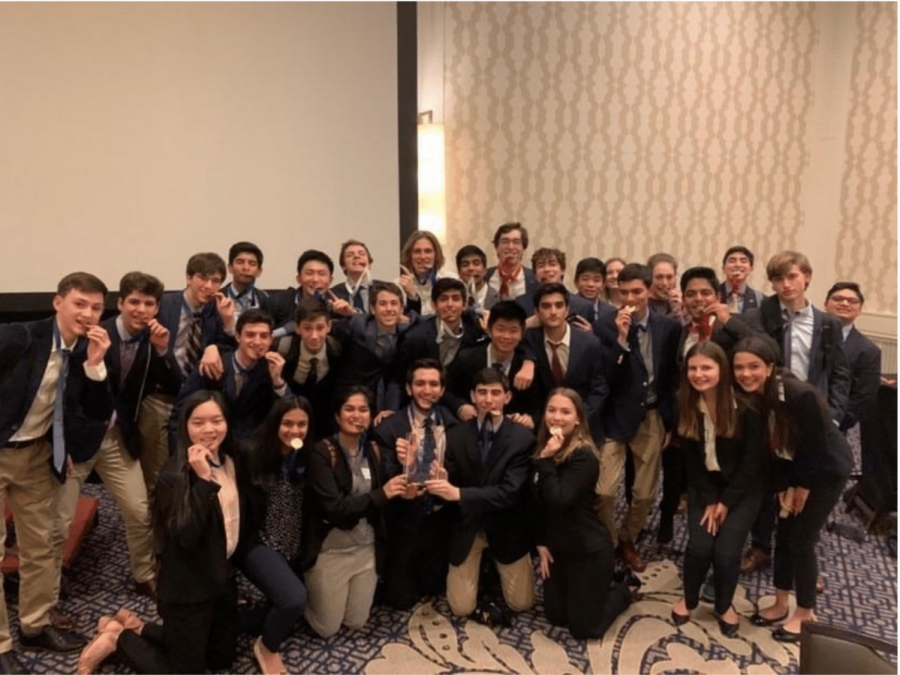 The DECA team gathers for a group photo after the Maryland State Championship in 2020. Whitman DECA has taught its outgoing President, Abby Chen, the importance of leadership, she said.

At the 2020 DECA Maryland State Championship, nearly 30 members of Whitman’s DECA club hold their breath, spread out among the tables of the spacious dining room. They shift nervously in their seats as the announcer’s voice rings out over the crowded room. He’s calling forward the students who placed in each event.

Then, thunderous applause erupts from the Whitman tables, cutting through the thick tension of the dining room. Junior Ezra Tinsky freezes as the announcer calls his name for the first place award in Business Law and Ethics. His eyes dart to his teammates; his excitement is mirrored in each of their beaming smiles.

In awe, Tinsky follows his partner to the front of the room to claim their medals, which proudly hang around their necks. The crowd cheers enthusiastically for the 29 Whitman club members who received placement awards. The applause rings in Tinsky’s ears, and the junior can’t hold back his grin. Looking back, Tinsky says it’s a moment he will never forget.

DECA is an international organization with a mission of preparing students to become business leaders and entrepreneurs. With around 3,700 chapters, DECA hosts three competitions per year aimed to test students’ management skills. At Whitman, the DECA community is made up of close to 80 students across all grades who want to pursue a future in business.

Whitman’s DECA club has been around for 29 years and is currently ranked second in Maryland behind Richard Montgomery’s High School chapter. Club members meet for an hour every Wednesday to prepare for competitions, listen to guest speakers and participate in workshops. During these training sessions, members practice writing resumes, interviewing for business positions and giving elevator pitches, among other skills.

“DECA looks really, really good to colleges,” said club Co-President Noah Pearlman, a junior. “It’s essentially like being on Model UN, debate or mock trial, especially if you have leadership and get involved.”

Through practices and competitions, members learn to step out of their comfort zones, Tinsky said. He joined the club in his sophomore year without any knowledge about business or entrepreneurship.

“In the beginning I was kind of just looking for a club to do,” Tinsky said. “Going to the meetings and actually checking out what the club was about made me come back.”

The Whitman DECA club has three committees: Finance and Fundraising, Public Relations and Recruitment, and Meeting Preparations and Career Development. Each team runs a different function for the club, like managing the group’s social media or recruiting members. The three club presidents for the 2021–22 school year — Pearlman, Tinsky and junior Rafe Epstein — each run a committee.

Competitions include both an interactive and a written component. In the hands-on event, competitors attempt to find a solution to a simulated business problem. During the on-paper event, students face a multiple choice test of 100 problems, the likes of which might stump any experienced CEO.

Students compete in one of four different career clusters: Hospitality and Tourism, Marketing, Finance or Business Administration. The content of students’ written and interactive events varies depending on which cluster they choose. In the Marketing career cluster, the event’s intensity makes students feel as if they’re “the director of a company,” freshman Emily Owens said.

This past April, Owens placed in the top 10 in Principles of Marketing at DECA’s pinnacle tournament: the International Career Development Conference (ICDC), where the highest-scoring competitors face off against one another annually. The feat was no small one — the freshman was up against over 13,000 competitors.

“A lot of people make it to ICDC at Whitman, but not a lot of people have made it to the finals,” Owens said. “I’m really excited just to be able to go to the competitions.”

Every year, Whitman DECA competes in a regional competition. All participants move on to the state tournament after regionals. The three highest-scoring individuals from each event then move on to the ICDC, where international DECA teams convene to compete against each other. The ICDC takes place in a different U.S. state every year.

The rigor of tournaments dissuades many students from joining DECA, Chen said. Chen has qualified for the ICDC all three years that she has been a member of Whitman DECA. This year, she placed in the top 10 in her event — Principles of Marketing — at the competition.

The most daunting aspect of DECA, in Chen’s view, is the multiple choice exam competitors complete.

“A lot of people are intimidated by the questions on the test,” Chen said. “I think having the drive to do a test and not be intimidated is probably the most challenging part.”

Every year since the club was founded in 1992, Whitman DECA has represented the school at the ICDC, commuting to a new destination for the weekend with their peers. For Chen, traveling to the ICDC with her team is the best part of DECA.

“One of my favorite memories is sophomore year for ICDC,” Chen said. “That year, we went to Orlando and to Universal Studios. I have good memories there, like exploring and having fun at Universal with my friends.”

However, due to the coronavirus pandemic, all DECA has held competitions entirely virtually since March of 2020, and Whitman DECA has not met in person since then. The experience has been slightly isolating, but members still reach out to help each other study for tournaments, Owens said.

When the freshman qualified for the ICDC in March — not only in her first year of DECA but in the midst of a global pandemic — she couldn’t believe it.

“I was so excited, because the whole time I’d been telling myself that I was probably not going to make it,” Owens said. “My whole team supported me. It was a really fun moment all together, even if we were essentially apart.”

“It’s been harder to reach out to new members and get more people coming,” he said. “I remember last year when we were in person you could have 30 or 40 people crammed into a media center for a meeting. Now, at our most recent meeting, we had 15 people.”

Though membership has declined due to the pandemic, the chapter has invited CEOs and founders of businesses to its virtual events as guest speakers in an attempt to keep meetings entertaining and informative. Even through a virtual platform, students continue to build their leadership skills and step out of their comfort zones, Chen said.

“In any setting, no matter what job you have, you need to be a leader,” she said. “DECA’s really taught me that.”