The Black and White • June 2, 2021 • https://theblackandwhite.net/69698/opinion/songwriting-like-taylor-swift-will-never-go-out-of-style/

Songwriting like Taylor Swift will never go out of style 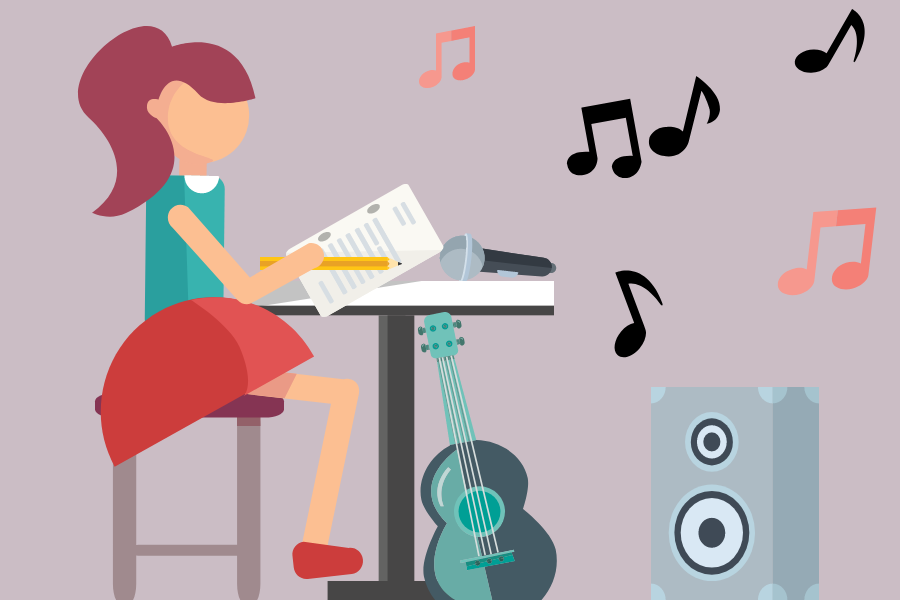 "Songwriting allows me to express sentiments that would otherwise remain trapped in my mind."

On September 8, 2013 — my 9th birthday — I was given a bright red CD player and, coincidentally, Taylor Swift’s album “Red.” Immediately after receiving the gifts, I spent hours dancing and singing along to songs in my bedroom, pretending I was Swift, using my hairbrush as a microphone. Although I was young and couldn’t yet connect to many of her songs, I gravitated toward her unique story-telling ability, which effortlessly captured the adolescent experience.

As I grew older, I became increasingly captivated by the relatability of Swift’s songs, which made them so gratifying to sing along to. I fell deeper in love with her self-written songs about teenage romance, heartbreak and life in general. The lyrics Swift writes are an art form — something I previously never thought I was capable of executing.

When the COVID-19 pandemic hit in the spring of 2020, I turned to music to relieve my increasing anxiety surrounding the virus. Quarantine completely altered my life, and the corresponding uncertainty rendered me utterly powerless and overrun by stressful emotions. As an introverted person, it was difficult to find ways to open up about how I was feeling and subsequently get the support I needed. I began to feel disconnected from others since I wasn’t seeing my friends at school nor at sports practices, which caused my troublesome feelings to build up with no outlet to let go of them.

To cope, I spent my days in isolation playing the piano and listening to music for hours at a time. I’d been playing piano since Kindergarten, but my passion for the instrument increased as I spent more time at home. Music became a shoulder to lean on and gave me stability during a period of unpredictability.

While spending my days in quarantine listening to Swift’s songs and playing them on the piano, I became inspired by the authentic emotion she expressed in her lyrics. So, with Swift as my motivation, I took my daily journaling hobby to a new level and began writing songs of my own.

I used lines that I had written in my journal as a starting point. From there, I expanded. I wrote lyrics that embodied the frustrations of being a teenage girl, stories that ranged from relationships to friendship tensions and everything in between. Despite my lack of experience, songwriting came naturally to me. It allowed me to let go of any negative situations with friends and family and helped me release my overwhelming thoughts. After an exhausting experience, aggravating drama with friends or just a plain old bad day, I turned to writing lyrics as a way to decompress, reflect and forget the stressors that consumed my life.

When an idea for a song popped into my head, I scrambled to write it down. Later, I looked at my scribbles and refined my ideas. Articulating what I felt in the moment allowed me to release my emotions rather than dwelling on them. Each line I wrote brought me a sense of relief.

In January, I transformed a poem I wrote about struggling to understand complicated relationships into my first song, “Split.” A few weeks later — after failed attempts to produce the song myself — I reached out to a friend who sings and plays guitar for help in picking out chords and the tune of the song. I lacked vocal talent, but with her musical expertise, we were able to capture my idea for the vocalization effortlessly. We spent extensive hours refining the song’s tone and notes on FaceTime and in her makeshift music studio basement.

She helped me adjust my lyrics to clarify my message, and in turn, I helped her choose some of the vocal and guitar aspects of the song’s performance. Although I didn’t know much about how to sing — and, likewise, she lacked songwriting knowledge — we encouraged each other to the best of our abilities throughout the musical process.

Working with her on such a personal level has strengthened our friendship. She has become someone I can turn to when I need a reassuring face. Whenever an incident upsets me, she often tells me, “Write a song!” knowing that working through my emotions will help relieve my distress.

After we released “Split,” we decided to form a two-person band, “Purely Sage.” Since then, we’ve produced numerous other songs with themes like that of Swift’s, expanding our band to work with Whitman students who also make music.

This community has created an important sense of belonging among like-minded individuals who help me feel supported and inspired throughout my songwriting journey. Writing lyrics with fellow musicians allows me to be vulnerable in a way that I’m not when I’m with others.

Songwriting allows me to express sentiments that would otherwise remain trapped in my mind. By composing lyrics, I’ve regained a sense of control over my emotions and found a way to release my feelings in a comforting manner. I often finish a songwriting session with a fresh state of mind and solutions to a number of my problems. I hope that by listening to and relating to my words, anyone can feel less alone.