The Black and White • May 25, 2021 • https://theblackandwhite.net/69651/sports/after-over-a-year-capital-one-arena-finally-has-its-swagger-back/

After over a year, Capital One Arena finally has its swagger back 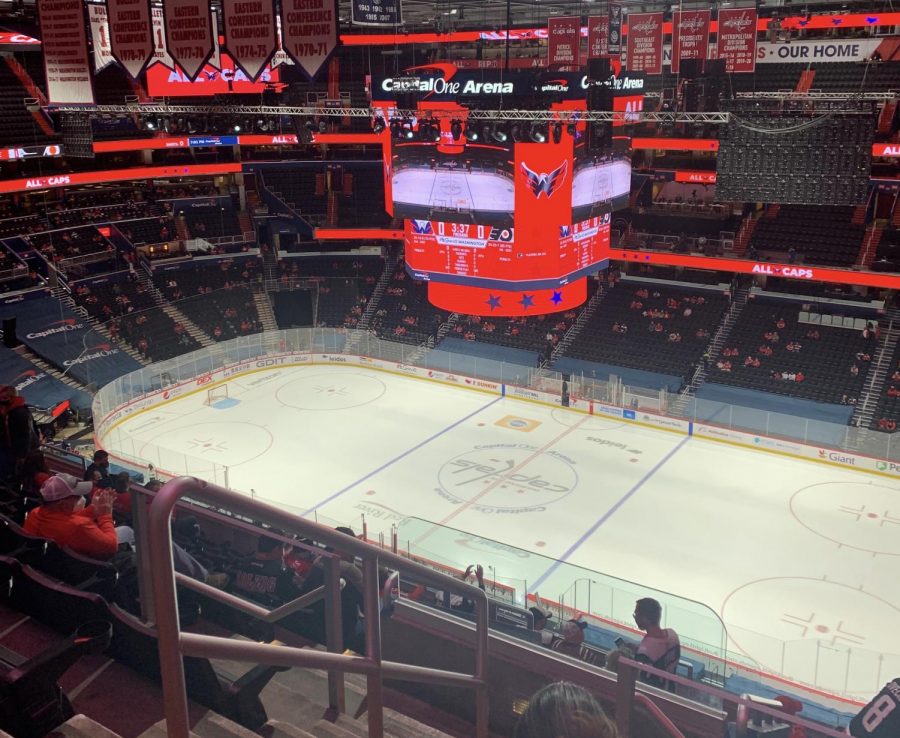 D.C. sports enthusiasts were able to step foot in Capital One Arena again after the stadium opened to fans on April 21. Each spectator sits with their own small group, isolated from others.

This story was written prior to the Washington Capitals’ elimination from the Stanley Cup Playoffs on May 23.

Barely a month ago, Capital One Arena sat dormant. Blue tarps covered the upper bowl, cardboard cutouts of fans dotted the lower level and fake crowd noise blasted throughout the empty arena to hype up the home teams.

In March of 2020, commissioners across the country canceled their respective professional sporting events as the coronavirus pandemic spread throughout the United States and Canada. After 14 months of a Capital One Arena without fans, the Washington Capitals and Washington Wizards — along with D.C. Mayor Muriel Bowser — announced on April 21 of this year that they would finally allow spectators back into the arena for the remainder of the season.

The Caps and Wizards share Capital One Arena, but Wizards fans lucked out with the April 21 pronouncement; their first chance to see Bradley Beal and Co. back in action was the same day of the opening. Caps fans waited until April 27 to watch their beloved hockey team take the ice again.

Initially, both teams allowed 2,000 fans per game. On May 14, Capital One Arena opened to 25% of its capacity, equating to just over 5,000 spectators. Season ticket holders have priority when it comes to scoring seats — single game tickets are only sold through third-party vendors.

Capital One Arena is only a quick Metro ride from Bethesda, and before the pandemic, many students relished making the trek to D.C. to see their favorite teams play. These fans — many of whom have season tickets to one or both of the arena’s teams — can now take that nostalgic train ride again, hopping off at Gallery Place and immediately gazing at the unmistakable structure that is Capital One Arena.

“I can’t wait to get back in the building and feel all of the excitement like I did in 2018 during our Stanley Cup run,” said sophomore Preston Kuhn, a Caps season ticket holder.

Still, sporting events won’t look the same as they did in previous years. Each spectator sits with their own small group, isolated from others. Fans must always wear masks except when eating and drinking. Attendees can only enter the arena through specific entrances to ensure social distancing, and workers take temperatures as D.C. sports enthusiasts flow in.

“The biggest difference I noticed going to a game during COVID was the timing,” sophomore Jacob Fienberg said. “Usually we could enter the arena two hours early, but when I was there, we were only allowed in an hour before puck drop.”

For Caps and Wizards fans hoping to attend games again, the April 21 announcement was only a small fraction of what’s yet to come. On May 10, Monumental Sports — the organization that owns the Caps and the Wizards — announced that June 11 will mark Capital One Arena’s return to full capacity.

Both D.C. teams are locked into a playoff spot and will be playing for a championship opportunity in their respective sports throughout May and June.

Sophomore Adam Grill said he’s optimistic that an increased number of fans will help motivate the players by providing home ice and home-court advantage. Amplified fan enthusiasm — and Capital One Arena’s reopening as a whole — signals that professional sports are returning to normal, the sophomore said.

“It’s great that the Wizards will be able to have more and more fans returning,” Grill said. “It will give them that extra energy to make a surge for the playoffs.”