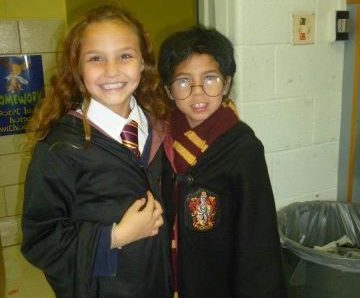 While moving away is a necessary decision for me to make, it is still painful. It hurts to see someone I had admired greatly — the creator of something I once loved so much — represent something I hate so much.

From the ages of nine to 13, I based my bedroom decorations on the Wizarding World of Harry Potter. Hogwarts house decals covered my walls, and a platform 9 ¾ sign hung on my door. My magic wand from Olivander’s — 10 inches, cedar wood and unicorn horn — still sits pristine in its box on my dresser. In third grade, for both Halloween and the Jewish holiday of Purim, I went as far as to dress up as the boy who lived. It is safe to say I am something of a Harry Potter superfan or, at least, I was.

Through the trauma of 2020, one of the developments that hurt me the most was Harry Potter author J.K. Rowling revealing her transphobic beliefs on Twitter.

In June of 2020, Rowling retweeted an article and expressed her irritation with the article’s use of the phrase “people who menstruate” instead of “women.”

Rowling’s followers attempted to explain that the phrase was inclusive to those who menstruate, but do not identify as women — specifically trans men and non-binary people who were assigned female at birth. Rowling, however, doubled down and released a Twitter thread that diminished trans identity.

On June 10, Rowling published a 3,690-word essay defending her beliefs and responding to the claim that she is a Trans Exclusionary Radical Feminist, a feminist whose activism does not include advocating for transgender people.

Throughout her essay, Rowling insinuates the unsubstantiated suspicion that young people — especially girls — who decide to transition have been influenced to do so by their peers. She expresses her misguided concern that the inclusion of trans women poses a threat to “natal” girls and women, and asserts her reluctance to open bathrooms to “any man who believes or feels he’s a woman.” Most insidiously of all, Rowling leverages her trauma as a survivor of domestic abuse and sexual assault to fearmonger to her substantive fanbase about the percieved danger of trans women.

J.K. Rowling’s comments are undeniably transphobic. And to cement her intolerance, she promoted a shop filled with anti-trans products and included a dated transphobic trope in her new thriller novel. So where do we go from here?

Many would say the best thing to do is separate the art from the artist. Whether or not such an endeavor is even possible is debatable, but for me, this is no longer an option because of the impact J.K. Rowling has had on the public perception of trangender individuals.

Rowling has 14.2 million followers on Twitter. In December of 2020, the BBC awarded Rowling the Russell Prize for her June essay’s “bravery.” She is a billionaire with a massive sphere of influence, and she has decided to wield her authority to spread false information and attack an extremely vulnerable community. Republican senator James Lankford quoted Rowling when he voted against the Equality Act, an LGBTQ+ civil rights bill. The potential damage she could inflict on the cause for trans equality cannot be overstated.

I feel I can no longer in good conscience continue to consume new Harry Potter content that would monetarily support Rowling. As an ally to the trans community and a member of the LGBTQ+ community myself, I refuse to knowingly inflict pain on people who are my friends, peers and siblings in the fight for queer equality and liberation.

While moving away is a necessary decision for me to make, it is still painful. It hurts to see someone I had admired greatly — the creator of something I once loved so much — represent something I hate so much.

Others recommend the plethora of Harry Potter fan content, which creators produce independent of Rowling. Scores of talented people create wonderful fan works, and I have enjoyed plenty of them in the past. But Rowling’s bigotry has irrevocably tainted the book series for me; the Wizarding World has lost its magic. So I’ve begun to look in other places to scratch my fantasy itch, searching for stories with representation of trans and non-binary characters, many of which are written by trans and non-binary authors. My beloved childhood series’ fall from grace has also been a wake up call for me to include trans representation in my own creative writing.

Harry Potter is very near to my heart; I don’t know if or when that will change. I will always be grateful for the friends I made and the joy I experienced because of the Harry Potter franchise, but the creator of this franchise has decided to use her platform to spread hate, and it’s time for me to move on. I’m going to start by reading fantasy books written by and about trans people, and creating my own stories where everyone is welcome.