The Black and White • May 24, 2021 • https://theblackandwhite.net/69574/sports/i-havent-missed-a-game-whitman-teachers-who-are-bigger-sports-fans-than-you/

‘I haven’t missed a game’: Whitman teachers who are bigger sports fans than you 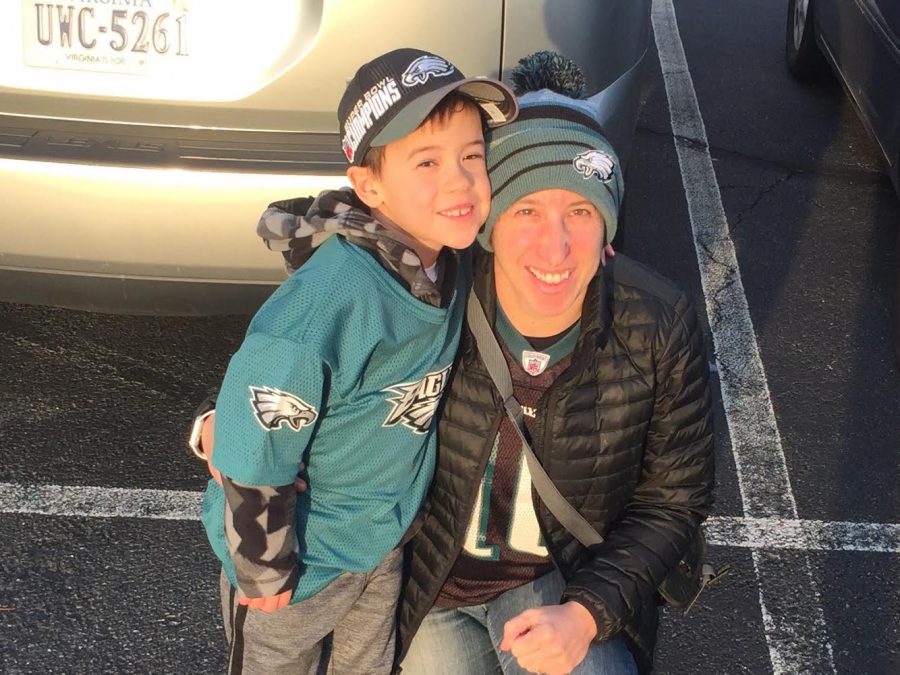 Psychology teacher Sheryl Freedman and her son pose for a photo before watching the Philadelphia Eagles take on the Washington Football Team.

In 2019, the average MLB baseball game lasted approximately three hours, five minutes and 35 seconds. Multiply the average game time by 162 — the number of games each team plays in a regular MLB season — and the total amount of gametime per team comes out to roughly 500 hours. Sitting through an entire game is, in itself, a grueling task; doing that 162 times from April to October may seem ludicrous. Yet Whitman math teacher and diehard Baltimore Orioles fan Michael Stebbins never misses a single second.

“I watch every game, and I’ll DVR a game and watch it later if I can’t watch it live,” Stebbins said. “I don’t miss many plays.”

As a kid, Stebbins loved sports. From competing in neighborhood football scrimmages to attending Washington Senators baseball games with his parents, athletics were a prominent part of Stebbins’ upbringing. When the Senators moved to Minnesota in 1961, the Orioles were the only baseball team left in Maryland, and Stebbins has remained a loyal fan ever since.

While casual baseball fans often joke that the MLB lacks the high intensity of other professional leagues, Stebbins appreciates the game for its persistent unpredictability, he said.

“I just love that you see something new every game,” Stebbins said. “I’ve watched so many games, and yet almost every game there’ll be something you never thought you’d see before.”

Stebbins’ support extends beyond Baltimore baseball, however; he’s also a lifelong fan of the Washington Football Team, and at the collegiate level, Maryland Terrapins basketball. Stebbins is one incredibly passionate sports fan, but he pales in comparison to social studies teacher Kenneth Heckert.

Heckert religiously follows the big four Philadelphia sports teams — the Eagles, Phillies, Flyers and Sixers — as well as international soccer. The term “diehard” is not enough to describe his sports fandom — he nearly cancelled a trip to Europe because the Flyers had made the Stanley Cup Final. He couldn’t sleep after Kawhi Leonard eliminated his beloved Sixers from the playoffs with an improbable game-winning buzzer beater. He refuses to draft Dallas Cowboys players in fantasy football because of the Eagles’ rivalry with them, and has similarly sworn off the Houston Astros in fantasy baseball after their cheating scandal surfaced last year.

“As long as I could breathe, I’ve been decorated in Philadelphia sports gear,” Heckert said.

On Sundays during the football and soccer season, Heckert stays glued to his TV for well over 12 hours — from first kick-off at early-scheduled soccer games all the way until Sunday Night Football, which concludes well past 10 pm.

For Heckert, watching sports is a relaxing way to unwind, keep his mind off the busy work week and enjoy himself for a couple of hours.

“It’s a distraction from all the stresses in my life,” Heckert said. “I could have a bad day at work, but then I can turn on the Phillies game and just forget about the day. It’s my therapy.”

Heckert has experienced many highs and lows as a Philadelphia sports fan. When the Phillies won the World Series in 2008 after enduring more than two and a half decades without a championship, Heckert felt like it was the greatest day of his life, he said. When the Eagles won the Super Bowl in 2018, Heckert was equally elated, and nothing, not even a fever, could stop him from celebrating.

Over the years, Heckert has learned to tone down his sports fanaticism in certain situations, especially when he gets into heated discussion with friends. In the past, his teams’ losses emotionally affected him and sports debates often angered him. However. Heckert has learned that getting too invested in arguing about sports can be counterproductive.

“A friend and I got to a point where we wouldn’t talk to each other for a week because of sports,” Heckert said. “But after a week, you’re friends again because you realize how stupid it is to be angry at somebody for supporting a different team than you.”

Along with providing enjoyable entertainment and a low-stakes medium of conversation, sports have proven to be a valuable means of connecting with others. AP Psychology teacher Sheryl Freedman uses sports to not only connect with her two young kids, but to also remain in contact with her brother.

Freedman’s father passed away when she was young, and bantering daily about the latest games with her brother has helped the two maintain a strong relationship for years.

“Sports were my main connection with my dad and brother,” Freedman said. “Now, my brother and I will talk to each other a lot about the Eagles and college basketball — it’s a big part of our family.”

In school, teachers and students can form valuable connections through bonding over sports, which can help build strong relationships, Freedman said.