The Black and White • May 12, 2021 • https://theblackandwhite.net/69499/news/whitman-students-encounter-anti-israel-protesters-in-school-parking-lot/ 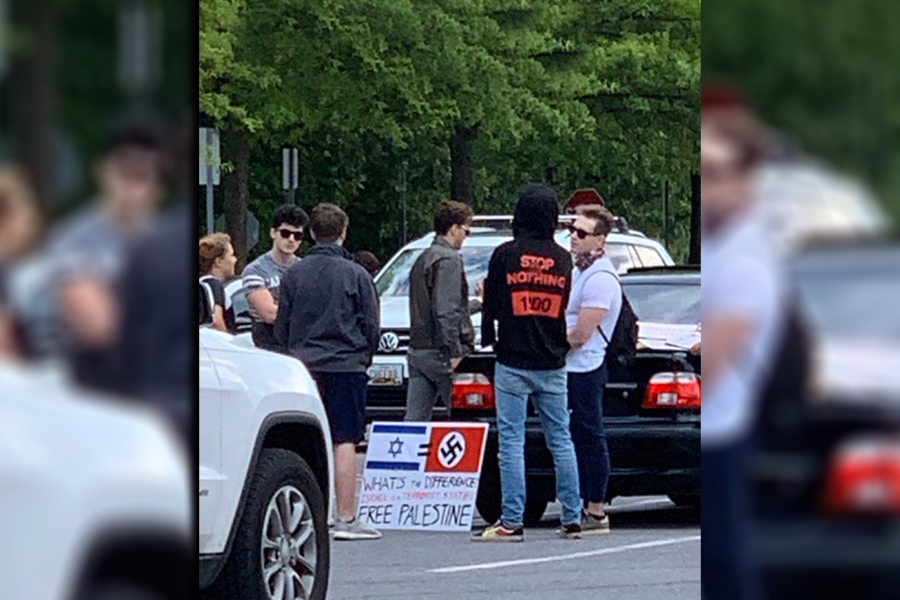 A group of Whitman students encountered men with an anti-Israel poster in the school’s parking lot Tuesday evening. A photo of the sign circulated among Whitman students, many of whom condemned the poster’s rhetoric on Instagram.

A group of Whitman seniors encountered at least five men with an anti-Israel poster in the school’s parking lot early Tuesday evening.

The top of the sign displayed a Nazi flag adjacent to an Israeli flag, with an equal sign in between them. Underneath, the poster read, “WHAT’S THE DIFFERENCE? ISRAEL IS A TERRORIST STATE. FREE PALESTINE.”

Senior Eli Blanks, who was among the seniors who initially noticed the protesters, posted a photo of the sign to his Instagram story shortly after the encounter. The picture immediately started circulating among Whitman students, many of whom condemned the poster’s rhetoric on their own social media accounts.

This incident comes amid high Israeli-Palestine tensions, which have resulted in days of violence and dozens of civilian casualties.

One of the protesters confirmed to The Black & White that he graduated from Whitman in 2018. The alumnus stopped at the Whitman parking lot to congregate with other men and prepare for a pro-Palestine demonstration in D.C. later that day, he said. The protestor requested to remain anonymous.

“I’m not Jewish — nor was I raised in a Jewish household — but for a group of people to have been persecuted by every civilization throughout history and still have such a powerful influence in the world today is not only impressive, but also a sign that they stick together and try to be the best in their respective fields,” the former student wrote in a text message to the newspaper. “Bethesda is a very wealthy and affluent area that’s rich with Jewish families. Educated, influential, nationalistic people.”

The man denied that the sign compared Jews to Nazis. Rather, the protestors intended for the poster to compare the Israeli and Nazi governments and condemn Israeli leaders’ “outrageous and horrific” actions, he said.

After noticing the men, senior Joseph Kaplan confronted the group in the encounter that Blanks’ widely-shared photo displayed. Kaplan said that he attempted to explain the Nazi flag’s hateful implications to the protesters, but that the men responded only with hostile rhetoric. One protestor insinuated to the senior that Jews were responsible for the Holocaust, Kaplan said.

“It’s f–ked up, what’s going on right now, but you don’t get to use that flag,” Kaplan said. “You don’t get to put that flag on a sign and use the Nazis and the Holocaust to elevate your own political opinion.”

Junior Arthur Mackey was among the students who condemned the protesters on Instagram Tuesday evening. The poster’s depiction of the Nazi regime made Mackey feel attacked, he said.

“Think what you will about the Israel-Palestine conflict,” Mackey said. “This isn’t just an attack on Israel. It’s an attack on Jews by comparing the Jewish people to their largest oppressor.”

Some students who support the protesters’ goal of Palestinian freedom — like junior Ava Zamani — said they don’t believe that displaying a swastika is an effective way to advance the cause of Palestinian liberation.

“I thought it was taken a bit too far,” Zamani said. “I feel like there are other ways to achieve and express Palestinian freedom. The symbols used were insensitive and inappropriate, but I understand where the frustration and anger is coming from.”

When Blanks saw the protesters and their sign, the sight of the swastika filled him with fear, he said. Still, the senior had second thoughts after publicly sharing his photo of the poster, since he worried that the picture would take away attention from violence against Palestinians, he said.

“I’ve seen that many Jews have begun centering this conversation about the Israel-Palestine conflict around the antisemitism that discussions about this conflict can expose,” Blanks said. “When the conversation shifts too much toward Jews and antisemitism, and away from the violence and hardships Palestinian people face every day, then we’ve begun doing a bad thing.”

When Kaplan returned home after the incident, he joined other students in reposting Blanks’ photo, writing on his Instagram story that the incident was an extension of underlying antisemitism in the debate over the Israel-Palestine situation.

“What the people were doing was hateful. It hurt me, and it was unbelievably upsetting to see this at my own school,” Kaplan said. “I just needed them to understand what they were doing was wrong, and as the conversation went on, I started to believe that less because they clearly didn’t give a s–t.”