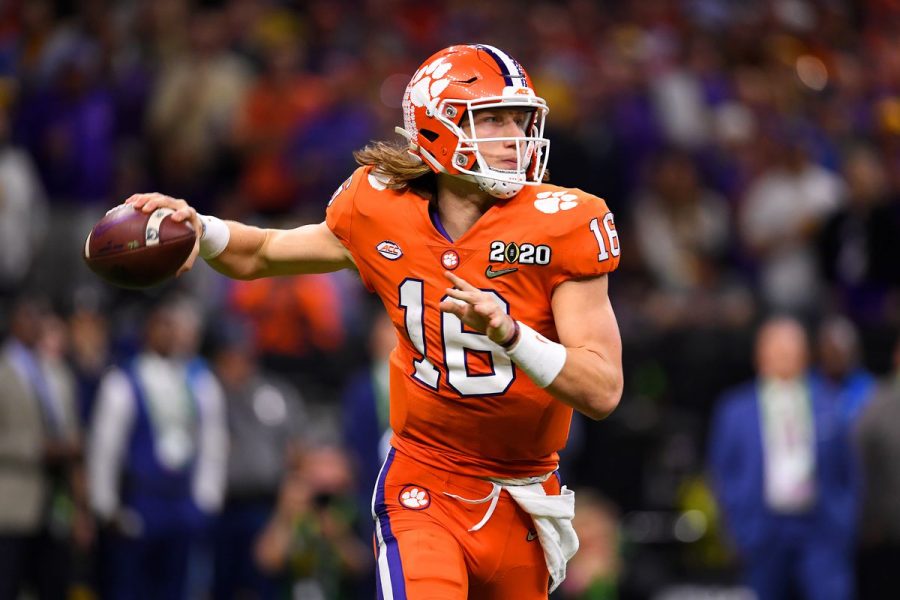 Trevor Lawrence is widely considered to be the number one overall pick for this year's NFL Draft. Follow along to see the Black & White's picks!

The 2021 NFL Draft is fast approaching, and the Jacksonville Jaguars will have the first overall pick for the first time in franchise history. Barring a wild turn of events, the Jaguars will almost certainly select Clemson star quarterback Trevor Lawrence with the number one overall pick.

After Jacksonville’s pick, however, a number of intriguing possibilities arise. Top prospects Ja’Marr Chase, Micah Parsons, Caleb Farley, Gregory Rousseau and Rondale Moore all opted out of the 2020 college football season due to the coronavirus pandemic, so teams have mixed scouting reports on them. Look out for quarterback-needy teams like the Patriots, Bears or Broncos to follow the 49ers’ lead and trade up to hopefully snag Zach Wilson, Justin Fields, Trey Lance or Mac Jones.

No surprise here. Lawrence is the best quarterback prospect in this draft class and should be the starting quarterback in Jacksonville for a very long time.

The Jets made it clear that they’ll be taking a quarterback here after shipping Sam Darnold to the Panthers for draft picks. Wilson is an incredibly talented gunslinger who will be the face of Gang Green the second he arrives in New York.

No. 3: San Francisco 49ers (traded from the Miami Dolphins)

The Niners are going for it, sacrificing two first round picks to move up nine spots and select a top quarterback. Fields has proven himself against tough teams in big games, and his impressive arm strength and accuracy gives him a chance to be San Francisco’s franchise quarterback.

No. 4: Denver Broncos (mock trade with the Atlanta Falcons)

The Broncos have one of the NFL’s more complete rosters, as they have exciting young pieces on offense and a strong, veteran group of playmakers on defense. However, Drew Lock’s performance last season was underwhelming, and Lance flashed loads of potential in only 17 games at NDSU.

The Bengals could opt for one of the premier playmakers in this class, but protecting Joe Burrow should be their number one priority. Riley Reiff is not the long term answer at right tackle, and Sewell’s freakish athleticism and dominant play at Oregon make him a potential franchise NFL offensive lineman.

No. 6: Miami Dolphins (traded from the Philadelphia Eagles)

Pitts is a 6’6” catch machine who would provide a massive upgrade for a Dolphins offense that has been looking to help second-year quarterback Tua Tagovailoa. Pitts would join an already solid receiving core in Miami that features a thousand yard receiver in DeVante Parker and two other quality receivers in Will Fuller V and Preston Williams.

No. 7: New England Patriots (mock trade with the Detroit Lions)

In what has been an uncharacteristically active offseason for the Patriots, don’t be surprised if Bill Belichick pulls off a trade to move up and select Jones. Cam Newton was underwhelming last season, and Jones offers elite accuracy and football IQ — despite having limited mobility outside the pocket.

After trading for Sam Darnold, the Panthers need to surround him with weapons in order to unlock his full potential. Chase was a force at LSU and would join other offensive weapons Christian McCaffrey, DJ Moore and Darnold’s former teammate Robby Anderson.

No. 9: Atlanta Falcons (mock trade with the Denver Broncos)

The Falcons pass defense was abominable last season, so a shutdown corner like Surtain would improve Atlanta’s dismal secondary.

Like the Falcons, the Cowboys have needs all across their defense. Horn’s aggressive play style and NFL readiness would help in a division with strong receivers like Kenny Golladay, Amari Cooper and Terry McLaurin.

While the Giants have more pressing needs at edge rusher and the offensive line, Smith would simply be too good to pass up at 11 should he fall to the G-Men. While Smith, Kenny Golladay and Saquon Barkley would form an extremely talented offensive trio, the Giants would have to make sure to go all-in on the edge rusher and offensive tackle/guard positions later in the draft.

No. 12: Philadelphia Eagles (traded from the Miami Dolphins)

The Eagles have whiffed and gaffed with recent wide receiver draft picks, but Waddle’s ridiculous speed and elite route running make him the easy pick here.

The Chargers need to protect their franchise quarterback. The team gave former Packers center Corey Linsley a five-year deal, and picking up the strong, versatile Northwestern product would be another step in the right direction for their offense.

The Vikings defense had a down year last season, and Paye’s disruptiveness off the edge would be extremely helpful to Minnesota, which finished in the bottom five for total sacks in 2020.

No. 15: Detroit Lions (mock trade with the New England Patriots)

The Lions are in full rebuild mode, and trading down to collect extra draft picks would be the smartest move for Detroit. A trade down for the Lions would most likely mean taking the best player available, which would be the instinctive and extremely athletic Parsons.

Patrick Peterson left the desert for Minnesota, which leaves a gaping hole at cornerback opposite of recently signed Malcolm Butler. With the Cardinals solidifying their defensive front in free agency by signing JJ Watt, snagging the aggressive and big-bodied Farley would improve their secondary as well.

After a confusing offseason in which the Raiders traded the entire right side of their offensive line, the team’s biggest strength last season is now their weakness. With many quality offensive tackles and guards on the board, the Raiders could go the unexpected route and try to find Rodney Hudson’s replacement.

While the Dolphins defense was tremendous last season and led the league in turnovers forced, they lacked a big time edge rusher. Rousseau was a sack machine and an impactful player in his lone season at Miami and would make an already stellar Miami defense even better.

Why not make a great defense even better? Owusu-Koramoah is a rangy, uber-quick defender that would fill a positional need for an already strong Washington defense.

The Bears have a few major needs, but most pressing of them all is right tackle. Darrisaw improved every season at Virginia Tech and would most likely start right away for Chicago.

Starting tackle Anthony Castonzo retired during the offseason, and Carson Wentz will need all the protection he can get if he wants to return to his old self.

The Titans’ pass rush has struggled during the past few seasons, and Phillips was a menace at Miami who would nicely compliment Jeffery Simmons on Tennessee’s defensive front.

After drafting their (hopeful) franchise quarterback in Zach Wilson with the second overall pick, protecting Wilson should be at the top of the team’s list of priorities. Vera-Tucker can play both tackle and guard and would be another step in the right direction for the rebuilding Jets.

The Steelers run game was awful last season, and the offensive line was mostly to blame. Jenkins is a 6’6”, 320 pound blocking machine that uses his body effectively, which can open up holes for whoever is running the ball for the Steelers next season.

Jacksonville turns to the defensive side of the ball here, where the Jaguars have struggled ever since “Sacksonville” nearly propelled them to the Super Bowl in 2018. Barmore was utterly dominant during his time at Tuscaloosa and would instantly upgrade Jacksonville’s defense.

The Browns signed John Johnson III in free agency to improve their secondary, but Cleveland still needs a CB2 opposite Denzel Ward. Newsome was a fantastic corner for Northwestern over the past two seasons and would bolster an already solid Browns defense.

Matt Judon and Yannick Ngakoue’s departures in free agency leave the Ravens with their worst defensive front on paper in a long time. Ojulari is agile and explosive, and he can play both edge rusher and linebacker for the Ravens.

Moore’s stock has ascended recently after an unbelievable pro day. With a lack of receiver depth behind Michael Thomas, Moore’s eye-catching speed and athleticism would allow him to play a variety of roles in the Saints offense.

Getting a legitimate WR2 should be the de facto choice for the Packers should someone like Bateman fall to them at 29. Bateman’s frame (6’2”, 209 pounds) and speed would be a great help to Aaron Rodgers and the Green Bay offense, especially in the red zone.

The Bills could also go with an edge rusher here, but Samuel is one of the better cornerbacks in this draft and would solidify the Buffalo secondary playing alongside Tre’Davious White.

A team’s offensive line matters — and last year’s Super Bowl proved that fact. Cosmi flashed a ton of upside at Texas and would add depth to a Chiefs unit that was unable to effectively survive a slew of injuries.

It may seem like the Buccaneers don’t have many positional needs, because, well, they don’t. However, Jason Pierre-Paul will be a free agent next offseason, and Oweh has the skills to become another key part of an already stacked Tampa Bay defense.

Tune into ESPN on April 29 to see how these predictions stack up with the real draft results.